Special offer: 25% off my new book, After Wagner

My new book, After Wagner: Histories of Modernist Music Drama from 'Parsifal' to Nono will be published this month. My publisher, Boydell & Brewer, has kindly offered 25% off the recommended price to readers of this blog. Please click here for the online flyer, which includes a discount code for any of you who might be interested. I reproduce below the blurb and front cover, which features a scene from Stefan Herheim's Bayreuth production of Parsifal: 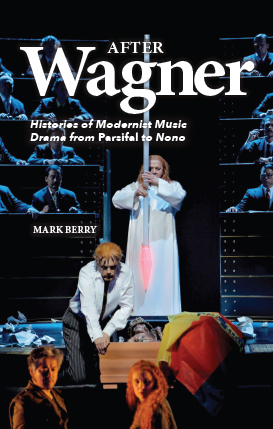 This book is both a telling of operatic histories ‘after’ Richard Wagner, and a philosophical reflection upon the writing of those histories. Historical musicology reckons with intellectual and cultural history, and vice versa. The ‘after’ of the title denotes chronology, but also harmony and antagonism within a Wagnerian tradition. Parsifal, in which Wagner attempted to go beyond his achievement in the Ring, to write ‘after’ himself, is followed by two apparent antipodes: the strenuously modernist Arnold Schoenberg and the æstheticist Richard Strauss. Discussion of Strauss’s Capriccio, partly in the light of Schoenberg’s Moses und Aron, reveals a more ‘political’ work than either first acquaintance or the composer’s ‘intention’ might suggest.
Then come three composers from subsequent generations: Luigi Dallapiccola, Luigi Nono, and Hans Werner Henze. Geographical context is extended to take in Wagner’s Italian successors; the problem of political emancipation in and through music drama takes another turn here, confronting challenges and opportunities in more avowedly ‘politically engaged’ art. A final section explores the world of staging opera, of so-called Regietheater, as initiated by Wagner himself. Stefan Herheim’s celebrated Bayreuth production of Parsifal, and various performances of Lohengrin are discussed, before looking back to Mozart (Don Giovanni) and forward to Alban Berg’s Lulu and Nono’s Al gran sole carico d’amore. Throughout, the book invites us to consider how we might perceive the æsthetic and political integrity of the operatic work ‘after Wagner’.
After Wagner will be invaluable to anyone interested in twentieth-century music drama and its intersection with politics and cultural history. It will also appeal to those interested in Richard Wagner’s cultural impact on succeeding generations of composers.
Posted by Mark Berry at 8:30 am

This looks very exciting - I'll be getting it. But there's a typo (correcting which will of course make my commrent look ridiculous so feel free to delete me) - Parsifal to Nono, not Wagner!

Thanks, Thomas. I've corrected it now - and admit that I made the silly error, so you won't look at all ridiculous!