A highlight of my (late) summer was a visit to the Bandstand Chamber Festival in Battersea Park. For the dark nights, in every sense, of December, artistic director Anthony Friend has had the festival decamp a little further down the Thames to St John’s, Waterloo under the new guise of ‘Spotlight Chamber Concerts’. Very apt, too, the church in darkness, musicians spotlit in front of the altar steps.


The Maxwell Quartet’s concert (later joined by Friend on the clarinet) opened in arresting fashion, thanks to Haydn’s grand gesture—a simple perfect cadence, and yet…—to open his op.74 no.1. It is very much a ‘London’ quartet, written for the same public as those astonishing final dozen symphonies, and there seemed in these darkest of times something special indeed to hearing it in a city that has suffered so greatly not only this year but ever since Cameron’s infernal referendum. Keenness of playing encompassed civilisation and rusticity, detail and longer line, Haydn’s vision of humanity thus diverse and reconciled: a European union. I was struck by the concision of the whole, nowhere more so than in a development that, in performance as on the page, changes everything and yet has us return. The surprises, well-nigh Beethovenian, of the recapitulation, if we may call it that, afforded both delight and imperative to listen.


Cultivated innocence characterised the Andantino grazioso. Such dialectical reconciliation—not for nothing was Haydn Beethoven’s teacher—did not efface but rather brought into relief both the movement’s darker movements and the composer’s ever-astonishing powers of invention. Speaking of invention, what an extraordinary movement the Minuet is, here relished and communicated as such with evident love and understanding. Its swing said so much, as did the relaxation, finely judged, of its A major Trio. The finale fizzed with character, connoisseurship, and yes, invention. As in the first movement, performance made clear the richness of use to which Haydn puts his material. It was, again like the opening, impressive in a frankly symphonic sense that remained true to this mesmerising chamber music for Johann Peter Salomon, an earlier ‘citizen of nowhere’.


There remain—dare one even use that verb any more?—other unions for our political masters to break, not least that with us since 1707. At least for this evening, though, that could be postponed, the Maxwell players rewarding us with a little Scottish folk music, as arranged by fiddlers William Marshall and Isaac Cooper. In excellent command of the idiom, the players built and shaped both selections finely.


We were left in no doubt from the opening bars of Mozart’s Clarinet Quintet that here was a very different composer from Haydn, or indeed his eighteenth-century Scots counterparts. Lyricism of a quality it is difficult not to think divine—and why would one try?—is the order of the day, and so it sounded, Anthony Friend’s liquid tone just the tonic for cares we had (almost) left without the church. Distinction of method in so many ways was communicated with an effortlessness, however apparent, however illusory, that remains nonetheless crucial to so much Mozart. The development sounded every bit as exploratory as Haydn’s, the recapitulation both returning and venturing into new, Così-like territory. That sense was furthered in a reading of the Larghetto of rare hushed intimacy, clarinet first among equals—until another instrument was. The Minuet brought ebullient contrast that yet already hinted at a vulnerability, even anguish, given fuller voice in the first trio. The second trio’s serenading chimed with both tendencies. Both uniting and providing new points of departure, Mozart’s finale once again proved the very model of Classical variation writing, transformative in a fashion difficult not to consider operatic. For, in those most European of music, wistful and joyful, we both recognise ourselves and a world now sadly, even tragically, unattainable.


Hopes to attend the final two concerts in this series, scheduled for later this week, have now been dashed by the latest preposterous restrictions. Shops, gyms, even saunas remain open; a Christmas massacre looms; yet Covid-secure chamber concerts are once again forbidden. However, there is spotlighting at the end of the tunnel; Steven Isserlis and Angela Hewitt will reschedule their recitals. Perhaps it was too much to hope that my final concert music of 2020 would be Beethoven’s opp.110 and 111. As I have recently written elsewhere, this virus-ridden world remains obstinately deaf to the music it most needs to hear. If anything can have us retain hope, it is the composer of the Ninth Symphony, with which I heard out 2019. Let us hope; let us pray.

Academy of St Martin in the Fields
Ryan Wigglesworth (conductor)

‘Awakening’, aptly enough, was the theme of this post-lockdown concert from the Academy of St Martin in the Fields in the church where, for this orchestra, it all began. I only noticed that after the event and confess to having been thinking in different, if far from opposed, terms, related to the theatre. Music means many things at different times, to different people—and surely all the more so in times such as these. At any rate, a sign of musical light in London at the close of the first week of Advent was welcome indeed, not least given the typical accomplishment of the Academy’s playing, this time under Ryan Wigglesworth.


As a heretic who has always preferred Sibelius’s smaller pieces to his symphonies—perhaps one day they will ‘click’ with me—I was delighted to hear the ‘Nocturne’ from his incidental music to Belshazzar’s Feast in a spacious performance well judged for the church acoustic. One heard from the outset coolness and warmth in the Academy’s sound, both in timbre and harmony. Such balance was typical of the performance as a whole, Tchaikovskian inheritance apparent, yet neither overwhelming nor overwhelmed by Sibelian distinctiveness of voice. Scalar orientalism may have charmed, yet sounded rightly incidental (in the other sense). Here was a Nordic heart beating through out.


Hans Abrahamsen’s ‘recomposition’ of Carl Nielsen’s Three Piano Pieces had no intrinsic connection with the stage, yet sounded here very much as if it had. The first piece set the scene for quite a journey within only a few minutes. Quirky, colourful, yet with enough disorientation to retain a welcome enigmatic quality, it proved neither one thing (Nielsen) nor the other (Abrahamsen), albeit in a positive, alchemic sense: if not quite the magic of theatre, then certainly of performance, the latter here one of sensitivity and verve. The second proved similar yet different, a second act in miniature. Here a sense of kinship with Maskarade seemed stronger, but likewise tendencies in another, re-composer’s direction. Likewise, still more, in the third: whether that were a matter of work, performance, or my listening, I am not entirely sure. And does it matter? Some wind sounds, perhaps inevitably for such an ensemble, echoed Schoenberg’s First Chamber Symphony; by the same token, some emphatically did not. Music guards its mysteries.


Wagner’s Siegfried-Idyll is music with a complex relationship to the stage: it precedes the composition of the section of Siegfried from which it seems to ‘come’, written for a domestic stage—and a domestically staged event. To accord it its full title: ‘Tribschen Idyll with Fidi-Birdsong and Orange Sunrise as Symphonic Birthday Greeting Offered to his Cosima by her Richard, 1870.’ This lullaby of peace, joy, and world-inheritance, to employ the conventional leitmotif references from the opera yet ‘awakens’. It certainly did here, in a reading brisk and unsentimental which, at start, sounded a little as if Wigglesworth were trying to force Wagner’s melos into pre-conceived moulds. In truth, the opening is very difficult indeed to bring off; it takes the most experienced of Wagnerians, whether a Furtwängler or a Boulez, to do so with the ease it seems to demand. There was no denying, though, the excellence of the ASMF’s instrumental playing, nor later on of Wigglesworth’s shaping of Wagner’s climaxes, always more economical than one expects and all the more telling for that. There was, moreover, an almost Straussian after-glow to the final minutes; it would always have been welcome, but was all the more so set against the cold frigidity of the pandemical world outside.


Finally came Mozart: ever poised between concert hall, theatre, and indeed church. His Symphony no.34 opened with festal swagger that did not preclude relaxation. If anything, I felt Wigglesworth offered too much of the latter later in the first-movement exposition, somewhat losing momentum. It remained a joy, however, simply to hear this music once again. There was throughout a keenness to the woodwind that spoke, or better sang, of the opera house, leading to a coda to lift the darkest of spirits. Sometimes—often, with Mozart—C major can prove just the tonic. The Academy’s small forces reinforced the slow movement’s lineage in Salzburg serenades. Wweetness of string tone was especially welcome given the perversities we often suffer nowadays in this music. Polish and fire marked the finale: a Catherine wheel in the Salzburg night sky I missed so much this summer. There was, thank goodness, no fussiness to Wigglesworth’s direction, nor to the playing. And what playing it was! 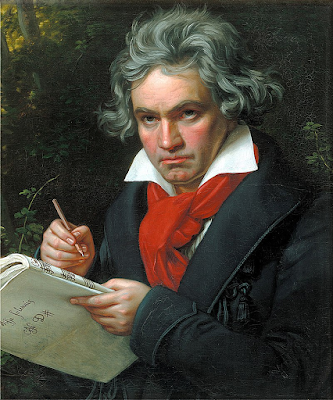 The British Library has launched its online exhibition to celebrate Beethoven’s 250th anniversary with a new Discovering Music space on the nineteenth century. I am delighted to have contributed, alongside such excellent scholars as John Irving, Laura Tunbridge, Barry Cooper, David Wyn Jones, Leanne Langley, and Wiebke Thormählen. My own contribution, drawing on a sketchbook and other of the Library’s holdings, is on the Pastoral Symphony and Beethoven’s relationship to Nature. Please click here.

Email ThisBlogThis!Share to TwitterShare to FacebookShare to Pinterest
Labels: Beethoven

What a year, and it is not yet over yet. It was to have been Beethoven's, of course, and still was in its way. To celebrate as well as to mourn that, I wrote a piece on 'My Beethoven' for Frances Wilson's excellent Cross-Eyed Pianist blog: click here.