Why have I been suspended from the Labour Party? 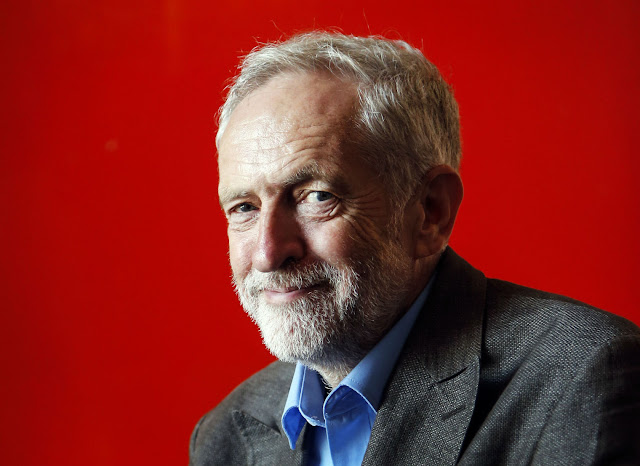 Whilst I was in Bayreuth, that hotbed of Trotskyite subversion, I heard that many friends had received their electronic ballots for the Labour leadership election. Mine did not arrive, but I was told that they were being sent out in batches, for some technological reason I did not understand, and that there was at least another week in which mine would. When it did not, I called the Labour Party. I spoke to a very helpful, very pleasant woman in Newcastle, who told me that my ballot had been sent out – note, she told me that it had, not that it should have been – but that many people whose ballots had been sent out on one particular date (26 August, I think) had not arrived, so they were reissuing them on application. She would resend mine now, although, mysteriously, it might not arrive until the beginning of this week. (What are they doing? Printing out ballots and attempting to squeeze them down a cable?) Today came, and still there was no ballot. I called again, and spoke to another very helpful, very pleasant woman in Newcastle; I do not think it was the same one, but maybe it was. She told me she would resend my ballot again. I wondered whether the problem might have had something to do with my e-mail account, so suggested that she send it to my work e-mail address instead. She said she would do so. A couple of hours or so passed – again, rather odd, for so instantaneous a form of communication – and then a message finally appeared. It informed me:


You will shortly receive a letter in the post regarding your application to the Labour Party. A copy is attached to this email for your reference.

I opened the attachment, which read as follows (click on it, if you need to enlarge): 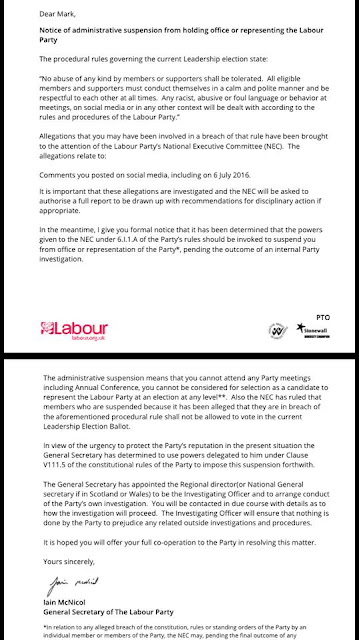 So I have been suspended, for some unspecified offence(s). I will not be informed of their nature. I will have no right to appeal. I will not have a vote in the leadership election, despite having begun my attempt to join on the day of Jeremy Corbyn’s election as leader, almost a year ago,

What might I have done? My Facebook profile is not public, although a friend discovered the following posting from me: ‘July 6 · London · Mark Berry   has just bought himself some chocolate to celebrate Chilcot Day. The assistant said he had guessed I was “a champagne truffles sort of guy”. Indeed I am, cognac too.’ Perhaps I was informed upon by the friendly assistant in Charbonnel & Walker? No, of course I was not. I can only assume that my alleged offence is to have said, on the day of the Chilcot Report, on Twitter, that I hoped Tony Blair would now be expelled from the Labour Party. I bow to no one in my judgement that Blair is a despicable war criminal, who has no place in any ‘progressive’, let alone socialist political party. Many in the Labour Party would agree with me; many would not. I am hardly alone in having expressed such a view.

If not that, I suspect I must be the first person to have been suspended from the Labour Party on account of a controversial – not that I knew it was – opinion concerning the music of Webern. Perhaps you have too; if so, do get in touch. We can form a support group. 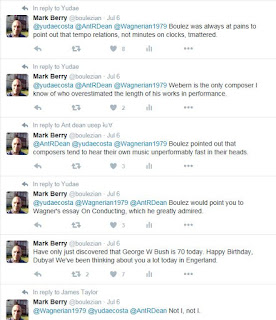 I am not a politician. I am not a celebrity. I am not a remotely influential person. None of that is false modesty; it is simply a statement of what comes as near to empirical fact as anything will ever do. Whatever I might have done or said that offended, it was certainly not ‘racist, abusive, or foul’. If it were construed as such, it must have been discovered by someone who either wished me personal ill, or wished to disqualify me from voting on account of my political views. Someone looking at Twitter would discover pretty quickly that I was – and am – a proud, although far from uncritical, supporter of Jeremy Corbyn. That, we can all be sure, is why I have been suspended from membership. Those whom the Labour Right term ‘Trots, rabble, dogs’, and are nothing of the sort are, ironically, being treated in a fashion that would have made Stalin blanch. He would at least have offered me a show trial. In fact, let us be realistic: he would never have thought me a person worth bothering about in the first place.

I am furious. I am also very hurt. This is the first time in my life I have joined a political party. I, like many others, including many of my students, were genuinely enthused by Jeremy Corbyn’s campaign last year. In the aftermath of what was, to many of us, the catastrophe of a Conservative election victory, there seemed at last to be some hope, however illusory. I registered as a supporter then, and promised that, were Corbyn to be elected, I should definitely join; if he were not, I should decided then. I applied, as stated above, the day of Corbyn’s election, indeed within an hour of that. After quite a lengthy wait, I received a letter from the Labour Party telling me that my borough, Tower Hamlets, was undergoing ‘special measures’ – an interesting euphemism for …? – and I should thus have to provide additional identification.

I was irritated by that and was about to leave for Vienna, to take up a scholarship there for a month’s work at the dangerously Trotskyite Arnold Schönberg Center. I left dealing with it until my return, by which time, when I called, I was informed that my application had lapsed. I therefore had to start all over again, and was eventually accepted as a member, something in which I took a degree of pride. That, so far as I was concerned was it. Until, of course, Labour MPs launched their coup against Corbyn and a barrage of legal challenges, etc. followed. Owing to ‘special measures’, etc., I had therefore not been a member before the arbitrarily imposed retroactive cut-off point imposed by the Labour NEC. I was not happy about having to pay its £25 extortion fee to re-register as a supporter, but did so, determined that Corbyn and the Left would not be defeated this way. That, again was apparently that, until this…

I am writing this to show that this could happen to anyone. It is indeed happening to anyone. The contempt for democracy, for natural justice, for the slightest of common decency shocks me; I hope that it will shock some of you too, whatever your political persuasion. This, I think, is one of the reasons Corbyn must win. Would you trust the people who have done this? I certainly would not.