Elektra: the opera of lockdown? 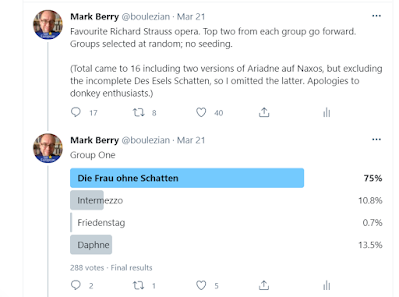 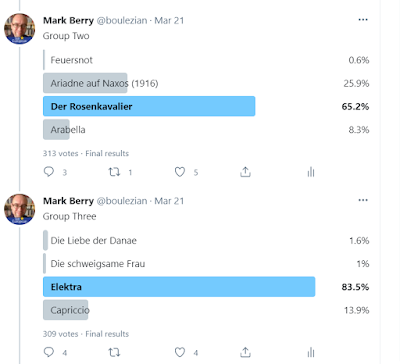 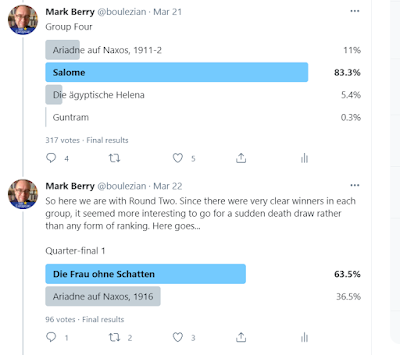 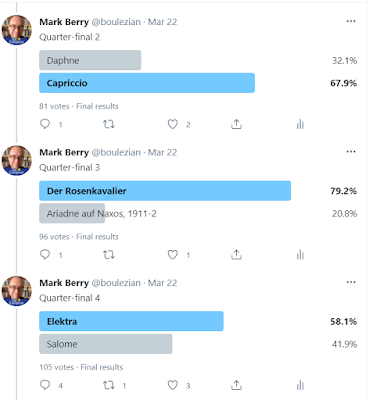 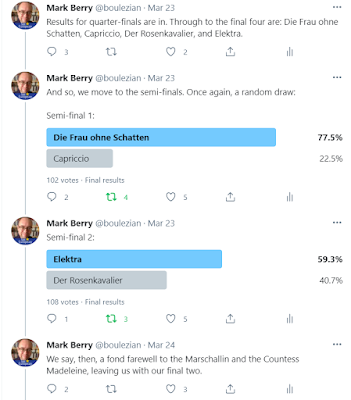 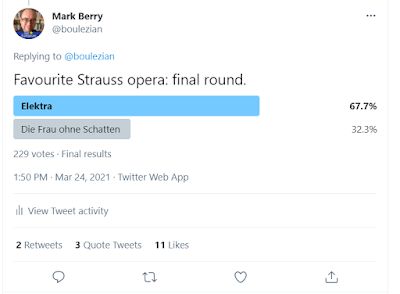 One year on. Arguably not: it is one year on, or will be this evening, from the last full-scale, fully-staged opera I saw in the theatre, Carmen at the Staatsoper Unter den Linden. Since then, there has not quite been nothing, even in the operatic field, though nothing quite on that scale. (HGO’s outdoor, one-act Sav­ītri broke the drought; the newly formed London Opera Company’s heroic concert Tristan with piano trio accompaniment; even a short new opera, Blue Electric, at the Playground Theatre: these have all been lights to lighten the darkness.)  Moreover, there have been concerts here and there, for which I am incredibly grateful, whether in London or on a carefully timed visit at the end of August back to Berlin for its Musikfest. I still had one left, the following day, in Berlin: Daniel Barenboim and Pinchas Zukerman completing their three-concert survey of the Beethoven violin sonatas. (Beethoven Year: remember that?)

However, it was the beginning of the end for anything remotely akin to the life I knew. I had no idea at the time, none whatsoever. The virus was spreading across Europe. Plans for a research visit to Milan had been cancelled; more importantly, pictures and reports we received from there were horrific. Yet there seemed little reason, at least to those of us in the dark with little or no scientific knowledge, to think this would happen in Berlin or London. Three days later, the announcement came that theatres and halls (initially of a certain capacity, but in practice all of them) would close until after Easter, which was in any case when I should reluctantly have to return to London, find somewhere to live, and return to work on campus, research leave having come to an end. Less than a week later, I boarded a flight out of Tegel, hurriedly booked ‘before it is too late’, and arrived back in this country, homeless. I stayed a night with friends—that was still possible here—and went up to Yorkshire, to my brother’s house. I had no idea, none whatsoever, and would probably not have agreed to go if I had, that I should be staying in his spare room for more than three months, forbidden by law to leave to find somewhere to live, let alone to hear music or see theatre.

Where are we now? There is vague talk of some performances from the middle of May. Who knows? We have been there before. One would have to be insane to believe a word delivered by this ‘government’ of thieves and liars. For Friends of Dido Harding, this has been one long excuse to steal, to profiteer, to repress, to laugh all the way to Barnard Castle and beyond, and not least to put sectors of dissent—education, the arts, the NHS and other public services—firmly in their place. Welcome to the endless ‘war on woke’, the true threat to ‘free speech’. ‘Art for art’s sake’ is a slippery beast, both justifiable and unjustifiable. It depends what one means. None of us wants art to fail to engage with questions in the world around us. By the same token, none of us wants theatre, should it ever return, to be nothing but masks, respirators, and—God help us—Microsoft Teams.


Right now, however, the fight is to retain any space for art, for criticism, for resistance, whether in a narrow or broader sense: any space, essentially, for life, for what makes us human. That can be a Haydn quartet, or a hug from a friend; it would be doubly welcome, were it to involve both. Of the many unforgivable aspects of this tragedy and its handling—let us never forget one of the highest per capita death tolls in the world, yet ‘Boris’ (sic) must ‘save Christmas’—has been refusal to acknowledge that for many of us, whether in single-person or larger ‘households’, our life-giving, life-protecting support networks depend on people and activities beyond where we live. Many of us live alone; many of us are separated from our loved ones; many of us do not have gardens; even for many of those who do, they are not remotely enough. If what matters most of all to you is your nuclear family, good for you; none of us begrudges you that. For others, though, life itself has been constructed beyond that, be it in complement or opposition to it. We do not want to watch streaming opera; that is not what opera is for us. For one thing, we spend far too many of our waking hours toiling away on screens as it is. For another, we need human contact; we need the business, the surprise, the joy, even perhaps the infernal coughing of the theatre and the concert hall. Many of our friends have lost their livelihoods, much of their entire purpose in life. This is our ‘family’; this is our life.

Or it would be, were we permitted a family and life. Halls and theatres have been made ‘Covid-safe’. They need not spread the disease, unlike certain ‘priority’ activities that shall remain nameless. Reopening would help so many in so many different ways. We know why they are closed. We know the indifference and downright hostility toward anyone who dares to be different, to be vulnerable, to be human. One year on, it is time to fight in earnest—for life itself. Fidelio, aptly enough, was to have been my last opera in Berlin.