No one would seriously claim Shakespeare’s Merry Wives of Windsor to be a masterpiece; the only question, it seems, is whether one might occasionally bear it. In that sense – and probably a few others – it is riper for conversion into opera than a play that stands in no ‘need’ of it. Verdi’s Falstaff has its devotees; if you like that sort of thing, then that is doubtless the sort of thing you will like. Otto Nicolai’s opera, for better or worse, stands closer to the play, for better, and is rarely seen on stage. All credit, then, to the Staatsoper Unter den Linden for resurrecting it for the first new production of the season, with a cast that can rarely have been matched, let alone bettered, and with Daniel Barenboim, no less, in the pit.

Barenboim’s direction prove sure and loving, the warmth of the Staatskapelle Berlin’s response, both to him and Nicolai’s score, exemplary. I cannot imagine that he or (m)any members of the orchestra had performed it before. (Its last outing on Unter den Linden had been three decades previously, in 1989: an apt anniversary, given that the new premiere took place, as seems now to have become customary, on the Day of German Unity.) There was certainly a sense of fresh discovery, but also, equally important, one of grounding in the fertile musical soil from which it had sprung. From the (relatively) celebrated overture onwards, the strings offered a lighter, more golden tone than one often one hears from this band: more Vienna than Berlin, one might say, and not inappropriately so for a composer formerly based in the Austrian capital and who somewhat reluctantly departed for its Prussian counterpart, at Frederick William IV’s invitation, only in order to have his new Singspiel, Die lustigen Weiber von Windsor performed. As one of Nicolai’s many illustrious successors at the Linden house, Barenboim seemed to relish equally the composer’s debts to Mozart, Beethoven, Mendelssohn, Weber, and Rossini, among others. Indeed, the correspondences with early Wagner – we might, perhaps, think this more convincing than Das Liebesverbot, if unquestionably less so than Die Feen – had me wish Barenboim would at last conduct one of the pre-Dutchman operas. Orchestral detail from the early German Romantics, form from the acknowledged masters of opera buffa – if tending more towards Rossini’s formalism than Mozart’s dynamism – and occasional hints of Fidelio and perhaps even Beethoven’s orchestral writing: there are worse mixes, far worse.

If you were expecting a ‘but’, you were not wrong. Nicolai, following ETA Hoffmann, described his work as a ‘comical, fantastical opera’. I suppose it is, if not of uniform success. Ultimately, it is difficult to say that the score, or indeed the opera as a whole, progresses beyond that. Its dramaturgy is somewhat weak, without much or anything in the way of characterisation. Mozart casts a heavy shadow, of course, but the action and humour, such as it is, remain situational and formalistic. Salomon Hermann’s libretto might profitably have distanced itself further from Shakespeare. Still, there are plenty of operas with unsatisfactory libretti and/or dramaturgy. We are not speaking of catastrophes such as Euryanthe or Oberon; nor, however, are we speaking of such scores. This, perhaps, is where a radical production might save the day – except, alas, it did not.

Save for updating, David Bösch’s production probably does too little. Some might say it does too much, not least with respect to the dialogue. Whatever the truth of that, this does not seem a happy medium. It is difficult to see what is gained, other than avoidance of folksiness – thank goodness for that – from the transposition of the action to what seems to be social housing with a swimming pool (!) Transformations are effected where required. The final scene, in Windsor Park, offers genuine fairy magic, alongside knowing awareness of that transformation. More of that, read back into the frankly laboured earlier comedy, would have been welcome. Bösch picks up on the verbal motif of Sekt and drunkenness, but surely most directors would. Otherwise, we are left with the ‘jokes’ of René Pape in a fat suit, two of the men, Junker Spärlich and Dr Cajus, donning tutus and falling for each other, and women getting the better of their menfolk. The latter victory is of course, a mainstay of comedy, but something more of a critical stance is surely needed at this stage. Or perhaps not: much of the audience seemed to love it. There are worse outcomes than that, far worse.

Given the quality of vocal and stage performances, they could be forgiven for that. Pape’s Sir John Falstaff is not nearly so central a role as some might expect, Nicolai and his librettist remaining true to the opera’s title. That said, he and Michael Volle, as Herr Fluth (Ford), offered a winning combination of vocal excellence and lightness of touch, Volle the more natural comedic actor. (If you want to see Pape draped in a shapeless white dress and bonnet, impersonating the old woman of Brentford, now is nevertheless your opportunity.) The greater interest, though, is surely allotted the womenfolk and Fenton. None of them disappointed; indeed, all excelled. Mandy Friedrich and Michaela Schuster’s fine match of stage presence, coloratura, and vocal security proved just the thing, in every respect. Insofar as one could be moved by the drama of characters, it would surely have been by the delightful duo of Anna Prohaska and Pavol Breslik, the former – speaking, uniquely, in German and English – presenting a performance of typical acuity and musicality, the latter ardent even beyond expectations. In their high-spirited, yet ultimately touching, parody of Romeo and Juliet, work, performances, and production surely reached their high point. All singers, however, deserved thanks for fine performances, so too the chorus. 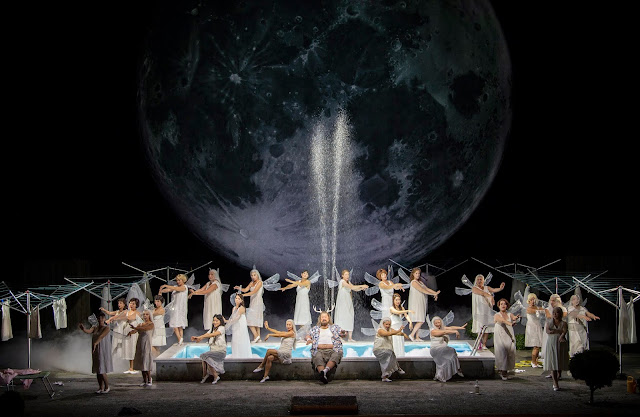 As for Nicolai, it would be of interest to hear more of his music, not least to gain a broader impression. Reputations resting on a single work can often mislead. Ulrich Konrad’s New Grove article on the composer mentions, for instance, an 1832 ‘Baroque style’ Te Deum, which sounds, on the face of that description, rather different from this opera, a work of no mean historical importance. Its overture is charming, and deserves to be heard more often than is the case nowadays. A production willing to press further, to interrogate the work and its possibilities, indeed to create possibilities beyond those immanent, may yet provide us with a more compelling piece of theatre. It certainly offered opportunities, well taken, for fine singing: well appreciated, it seemed, by the audience and the singers themselves. I cannot help but think, however, that Nicolai’s ultimate legacy will remain his founding of the Vienna Philharmonic concerts a few years earlier. There are worse legacies than that, far worse.