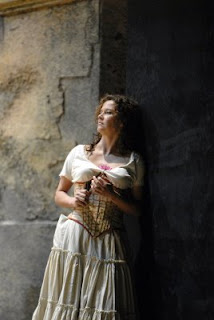 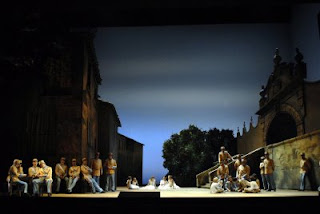 This was to have been a new production of Carmen at the Deutsche Oper, the first since 1979. Sadly, illness on the part of director, Jürgen Gosch intervened, so the house was compelled to revive, under Søren Schuhmacher, Peter Beauvais's thirty-year-old production, with not so much as a Konzept in sight. Reactionaries and cynics would doubtless wish, or at least claim to wish, that such a setback might happen more often, but I am afraid that the prettified naturalism of the sets looked, unsurprisingly, tame and dated. Maybe I have been corrupted by my experience, good or otherwise, of more adventurous modern productions; this, however, seemed more akin to the world of musical comedy – and not in the original sense of the Paris Opéra Comique. Nothing was harmful; by the same token, there was no especial insight afforded into the work. The production had its moments. Costumes, particularly the soldiers’ uniforms, were well designed. The dark mountain setting for the third act was considerably more effective than the other mises-en-scène. I thought the crowd scenes ably directed, something one certainly cannot take for granted in terms of contemporary stagecraft. It was good to have no apology made for twin bêtes noires of liberal fascism: cigarettes and bull-fighting.

The management of the Deutsche Oper had of course been place in an impossible position; this course was certainly far preferable to cancellation. Those who lament current directorial trends could do worse, however, than sample a few precursors and to recognise that it takes a producer of true genius – Patrice Chéreau springs to mind – to present something that will not quickly date. Better this, however, than the mindless populism of Francesca Zambello’s ‘West End spectacular’ approach for the Royal Opera; quite apart from the latter’s sheer untimeliness, at least with respect to anywhere east of the Met, it inflated Bizet’s opéra comique into something quite alien. There was, in general, an intimacy to the Beauvais-Schuhmacher production that worked well on its own terms.

Angelika Kirchschlager’s Carmen would, I suspect, have been the principal attraction for much of the audience, even had this not been a revival. There were a few moments in which she let her acting get the better of her vocal skills, but hers remained a keenly observed portrayal. Indeed, for the most part, stage presence and singing could not be disentangled, which is just as it should be. There was sexiness aplenty in the first two acts, without ever descending into a loss of dignity. Moreover, one could feel keenly the fatal transformation in Carmen’s character by the fourth act. Massimo Giordano projected both ardour and weakness as Don José. His is an impressive voice although, in repertoire such as this, he would do well to suppress the Italianate sob that too frequently intervened here. Still, one could readily relate to his anguish, even if it occasionally veered a little close to melodrama. Michaela Kaune offered a beautifully sung Micaëla. The smaller roles were generally well taken, Andrew Ashwin proving an especially winning Moralès; his career should be one to watch. And the children’s chorus was deservedly cheered; this was an estimable contribution indeed. The only real disappointment was Raymond Aceto’s Escamillo. Although he had a certain swagger on stage, it was never matched by his generalised vocalism and sometimes uncertain intonation. It was difficult to understand why Carmen might have chosen him.

Yves Abel handled Bizet’s score well, if without the fire that marks out the more notable interpretations. Care had clearly been taken to make the orchestra sound credibly French, not least when it came to some delectable woodwind solos. A notable instance was the flute solo in the second entr’acte, although sadly a sustained barrage of coughing ruined what should have been a truly magical atmosphere. Abel showed sound judgement in eschewing Ernest Guiraud’s once fashionable recitatives in favour of the original spoken dialogue. The conclusion, however, was disappointingly low-key, seeming rather to fizzle out from exhaustion. This was not a Carmen for the ages, but it marked an impressive debut for Kirchschlager and, especially given the difficult circumstances, should be accounted a success for the company.
Posted by Mark Berry at 6:57 pm