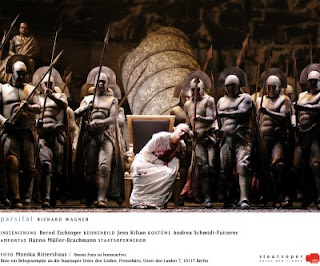 Perhaps expectations were always going to be too great for a Berlin Parsifal, conducted by Daniel Barenboim, with a cast to include Plácido Domingo, Waltraud Meier, René Pape, and Hanno Müller-Brachmann. Fate dealt a blow, in that René Pape was unable to sing, yet he was replaced by Matti Salminen, testament surely to the standing both of Barenboim and the Staatsoper Unter den Linden. There were many good things about this performance, yet it did not really live up to the height of my expectations, partly on account of a production that not only failed to make sense but often distracted from the music.

Meier was her usual excellent self, here given a far better opportunity to display her strengths than in the Paris Opéra’s Tristan, when I had last seen her. One could not only hear but see that she meant every word, even every stage movement. The three very different Kundrys of the three acts were both differentiated and yet recognisably incarnations of the same character, perhaps Wagner’s most intriguing of all. Müller-Brachmann was – and this is high praise indeed – an equally astonishing Amfortas. One felt his anguish almost as if it were one’s own; moreover, one understood why it had to be. Not only was every word audible and meaningful; it related intimately to the musical text, as did that to the words. Christoph Fischesser was an excellent Klingsor: malevolent yet no cartoon villain. His presentation of the text, musical and verbal, allowed one once again to understand why he had taken that truly fateful step of his. The smaller roles were well taken, not least the doubling up as Flowermaiden and Squire from rising young star, Anna Prohaska, recent recipient of the TheaterGemeinde Berlin’s Daphne-Preis. Her diction, like that of most of her colleagues, was as impressive as her command of line.

The circumstances of Salminen’s participation made his task difficult. For the most part, he and his unmistakeable voice rose ably to the challenge. His diction was, if anything, almost too pronounced, but if a fault that be, it surely errs in the right direction. There were quite a few instances, however, of uncertain intonation, partly a result of an extremely wide vibrato. I was surprised also by the relative thinness – certainly relative to several other performances I have attended at the Staatsoper – of the choral sound. The choral contribution was not bad but nor did it constitute the jewel that it has often proved.

The true musical disappointment, I am sad to say, was Domingo’s Parsifal. When I have heard him as Siegmund, most recently for the Royal Opera, I have been greatly impressed. Here, however, it sounded as though detractors of his Wagner performances might have been right along. Given that I, not a native speaker, was constantly troubled by his pronunciation, then Germans most certainly should have been. More seriously, he seemed to have forgotten more than a little of the text, both verbal and musical. At one point, he simply gave up on a line, whilst there were plentiful instances of mangled syntax – it sounded as though the spear were to melt rather than to heal Amfortas’s wound – accompanied by all too audible interventions from the prompter. To begin with, I thought the latter was a deranged member of the audience, so loud were her contributions. Moreover, Domingo, for the first time in my experience, both looked and sounded old. One simply could not believe that this was Wagner’s ‘pure fool’. Salminen, hardly at the outset of his career, seemed a youthful Gurnemanz by comparison: a strange and troubling inversion.

Barenboim was on very good form. There were occasional instances, notably in the third act, when I thought that transitions were a little disruptive. The absolute inevitability of everything in, for instance, Bernard Haitink’s Covent Garden performance was not quite attained, but Barenboim was not so very far off; for in general, this was a commanding traversal of a score he knows so well. Unlike many conductors, unthinkingly praised in some quarters for ‘consideration towards the singers’, Barenboim knows that the real drama lies at least as much in Wagner’s Greek Chorus, the orchestra, as on stage; if the singers cannot cope with Wagner’s orchestra, then they have no business singing Wagner. Not only does the drama lie therein; it is here that that drama is bound together through the density, both complex and yet possessed of a mediated immediacy, of the motivic connections and transformations. For this truly to work, one needs a great orchestra. Barenboim’s Staatskapelle Berlin did not disappoint. The depth and richness of its string tone present an object lesson to any orchestra, anywhere. One heard with pleasure, and sometimes with horror, a great deal of woodwind detail that can sometimes be submerged, and the brass provided an especially valuable contribution to the baleful ritual of a dying community.

However, Bernd Eichinger’s production seems to me fundamentally misconceived. Eichinger thinks of the work as an essay in time-travelling. So far as I can tell, this arises from a misunderstanding of Gurnemanz’s celebrated line, ‘Here space becomes time’, a line with philosophical roots in Schopenhauer, and beyond him, Kant. I assume that Kundry’s reincarnations are also involved in the misconception. It might have worked, I suppose, even if it were not what Wagner was thinking of. Yet even on its own terms, Eichinger’s Konzept is confused. The action moves from one time and location to another, rather as if Wagner had scripted a few episodes of Doctor Who. Some are more sharply defined than others, which come across as more of a mishmash. Andrea Schmidt-Futterer’s often bizarre costumes did not help in this respect. Many of the settings seemed merely arbitrary. There seemed no especial reason why images of the Industrial Revolution should accompany Kundry’s kiss, nor why Gurnemanz, in Act III, should awaken as a tramp on a park-bench in what appears to be mid-twentieth-century Manhattan. More problematic, however, is the fact that sometimes the characters perform against a mere scenic backdrop, whilst other instances, such as the mildly futuristic final scene, have them interact with what appears to be a real time and place. That scene appears to take place after some variety of bombing – seen on film – and is populated, for some reason, by a slightly menacing gang of bikers (the chorus).

It is not that the production does not have its isolated moments. The master-slave dialectic between Klingsor and Kundry presents a chilling, dramatically credible opening to a second act that then fails to live up to such promise. Whilst I could not quite work out intellectually why Amfortas tears out his heart for the knights to consume during the previous act – perhaps, I wondered, a violent twist to a Feuerbachian understanding of the elements in Holy Communion – there is a disturbing, powerful quality to what we see; it does not, however, seem to have any connection with anything else. Likewise, the contributions of fettFilm are in themselves of a typically high quality; it is a pity that they are not married to a more convincingly thought through production. This is a far cry from the astonishing achievement of Stefan Herheim’s Bayreuth production last year. The good news, however, is that Herheim will be producing a new Lohengrin at the Staatsoper next month, conducted by Barenboim. I shall report back.
Posted by Mark Berry at 3:14 pm