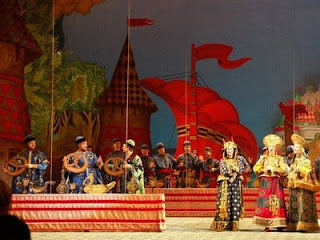 It cannot be claimed that Rimsky-Korsakov has had a good anniversary year. Messiaen certainly has, which is fair enough; it continues to be a remarkable opportunity to encounter or to re-encounter so many of his works. In England at least, it has perhaps been even more difficult to avoid Vaughan Williams, though some of us have tried our best. By contrast, one would barely have noticed that Rimsky died one hundred years ago. We need not slavishly follow anniversaries, of course, but when a figure is as neglected and frankly unfashionable as Rimsky, we might take a cue to investigate whether such neglect be deserved. Messiaen of course had his awe-inspiring legion of pupils, but Rimsky had Stravinsky and Prokofiev, amongst others. Full marks, then to the Kirov or Mariinsky – and to Sadler’s Wells – for presenting The Tale of Tsar Saltan or, to grant the work its full title, The Tale of Tsar Saltan, of his Son, the Renowned and Mighty Bogatyr, Prince Guidon Saltanovich, and of the Beautiful Swan-princess (Skazka o Tsare Saltane o sïne ego slavnom i moguchem bogatïre knyaze Gvidone Saltanoviche i o prekrasnoy Tsarevne Lebedi). It was Rimsky’s contribution to the 1899 centenary of Pushkin’s birth, first performed the following year. Sadler’s Wells, incidentally, would mount the British première in 1933.

I do not wish to exaggerate. The Tale of Tsar Saltan is no unacknowledged masterpiece. It does not approach Tchaikovsky, let alone Mussorgsky; indeed, it is many respects what one would expect it to be. The standard of craftsmanship is high, both in terms of form and – unsurprisingly – orchestration. When one considers the sheer ineptitude of some works that continue to hold the operatic stage – Verdi in particular springs to mind – that is worth remarking upon. Nor does the work overstay its welcome: the four acts plus a prologue do what they need to do and that is that. Such self-control is rare and laudable.
Yet there remains a certain emptiness at the heart – should there be one – of the work, such as one has equally come to expect from this composer. Some of the tunes are catchy; others are curiously unmemorable. Even the plentiful use of children’s songs and lullabies and fairground music – surely recalled by Stravinsky in Petrushka – seems to be simply a matter of ‘colour’. For all the jibes of the ‘Mighty Handful’ at Tchaikovsky’s supposed cosmopolitanism, his music exhibits far more Russian ‘soul’ than theirs, Mussorgsky as always excepted. Wagner sometimes seemed a little too obvious a model, mostly the Wagner of the Ring: the ‘Magic Fire Music’, the ‘Forest Murmurs’, and odd bits of processional or ceremonial music from Götterdämmerung. This was very much surface Wagner, though, for there was no motivic complexity to be found here. Perhaps the one real concession to modernity or at least instance thereof, although even this would seem more to be dictated by the tradition of storytelling in the Russian skazka, is furnished by the actors shedding their roles at the end to point out, if not quite a moral, then at least a happy ending: ‘Well, that’s the whole skazka; there’s no more to tell!’ Did Stravinsky have this as well as Don Giovanni in mind when composing the ‘moral’ to The Rake’s Progress?

Yet Rimsky’s very limitations perhaps add something to Tsar Saltan’s viability as a fairy-tale. It is no more than that, despite the oft-encountered mistranslation of it as a ‘legend’ rather than a ‘tale’. The lack of realism and of any attempt to penetrate beneath the surface – not that one cannot do this, as we have known at least from the Romantics onwards – enables something enjoyably fantastical to emerge. Doubtless one could psychoanalyse – and fruitfully – but perhaps one does not actually need to do so.

Certainly the production saw no such need. Apparently based upon Ivan Bilibin’s original sketches for the first performances, the designs were straightforwardly ‘colourful fairy-tale Russian’. Whilst there is plenty of room for other approaches, it is not necessarily a bad thing once in a while to have an opera set where it is ‘supposed’ to be – and there are real gains, such as the congruence between the visual and the musical. I did wonder whether more might nevertheless have been done in terms of digging a little deeper, perhaps presenting a more ‘modern’ slant lacking in the work itself, but for the most part I was content with what was given. The audience, however, seemed to find humour in what was not necessarily intended as such, ruining the all-too-celebrated ‘Flight of the Bumble Bee’ with laughter and even applause. At least it stopped two women in front of me from pursuing their clearly riveting conversation and from reading their text messages.

Tugan Sokhiev generally seemed at home with the idiom. There were occasions when the music sounded a little too four-square, but for the most part he provided a sure hand on the tiller and conjured up a fine palette of colours from the predictably, yet nevertheless laudably, fine Mariinsky orchestra. The brass sounded splendid when given their head, not least when this coincided with a riot of percussion. At one point, the Rimskyfied coronation scene from Boris Godunov did not sound far away at all. Woodwind solos were especially well taken and there could be no complaint regarding the warmth and brightness of the strings. Rimsky as storyteller in the colourful entr’actes could hardly have wished for more help in shining through.

Moreover, this was a good ‘company’ performance in terms of the singing. There was no one special ‘star’ to the performance, but that is not really the point here. Instead, we could once again marvel at the ability of the Mariinsky to cast from depth. Perhaps most affecting was Ekaterina Solovieva’s beautiful Militrisa, utterly credible as the honest girl who becomes Tsaritsa, the almost archetypal target of her sisters’ envy. Alexey Tannovitsky made a fine Tsar, assuming a gravity that belied his years. Sergey Semishkur nailed the role of the youthful Tsarevich, displaying just the right degree of ardent naïveté. I am not sure that there is much more for the Swan-princess to do than to sound – and to look – beautiful, but Olga Trifonova did that well. Natalia Evstafieva and Tatiana Kravtsova did well enough as Militrisa’s sisters, although their thunder was somewhat stolen by the malevolence of Nadezhka Vasilieva’s Babarikha. Eduard Tsanga showed that he could act as well as sing in the role of the Jester, whilst Vassily Gorshkov pretty much stole the show as Old Grandpa: character-acting at its best, with no sacrifice to vocal quality. So there you have it: an enjoyable and highly musical account of an opera neither trivial nor profound, but worth hearing every now and then.
Posted by Mark Berry at 12:50 pm