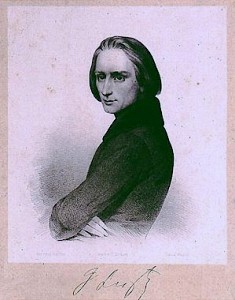 
One might have expected Leslie Howard, having accomplished the almost incredible task of recording Liszt’s ‘complete’ piano works, to have wanted to leave the composer alone for a while. Not at all – and given that this recital at the beginning of Liszt’s two-hundredth anniversary year included two world premiere performances, one can understand why. Howard has recorded these and many other newly discovered pieces for Hyperion, on two CDs to form the third (!) volume of his subsequent recorded series, ‘Liszt: New Discoveries’. Such is the exciting state of Liszt studies – testimony in part to the scandalous neglect and condescension with which the composer has met, and in certain quarters continues to meet – that new works, different versions of existing works, transcriptions, and so forth, continue to appear.

The new works and transcriptions took up the whole of the second half of this recital and received the more compelling performances. Indeed, the highlight proved to be the Christus transcriptions, which, according to Howard’s typically informative notes, have never been published outside Liszt’s vocal score and ‘seem never to have been performed in concert before now’. On this showing, they certainly should be; they are not mere piano reductions but realisations of the fascinating original music for solo piano. The first of the pieces encompasses the oratorio’s introduction and the shepherds’ Nativity pastorale. In Howard’s hands, it opened in a manner familiar from Liszt’s choral music; flexibility and the possibilities offered by plainsong – ‘Rorate cæli’ – shone through. I suspect that some other pianists, should they be interested, might find greater pianistic ease and expression; climaxes here could harden somewhat, whilst at the same time the rendition at times sounded a little tame. However, the Pastorale benefited from a winning lilt, opening quite enchantingly, perhaps inevitably putting one in mind of Berlioz’s L’enfance du Christ (the ‘Shepherds’ Farewell’ in particular). Form was clearly delineated too, which had not always been the case in the first half. ‘Das Wunder’ is the second piece, the ‘miracle’ (Wunder) being Christ’s calming of the waves. Here, Howard – and of course Liszt – made the original symphonic poem sound thoroughly pianistic, its final calm proving quite beautiful, both pianistically and harmonically.

Liszt’s Romancero espagnol was written in Spain during the 1840s, and was intended for publication in 1847; for some reason that never happened, and so, finally the Liszt Society Journal published the work in 2009. The work is in three parts: described here as an ‘Introduction and Fandango with Variations’, an ‘Elaboration of an Unidentified Theme’, and finally the ‘Jota Aragonesa and Coda’. This is no newly-discovered masterpiece, but it is often charming and stands possessed of a mildly Spanish flavour. Liszt’s characteristic big-heartedness shines through in an eminently likeable first part, which Howard projected to good effect. Late Beethoven it may not be, but there is contrapuntal working out to be heard during the second section. Sadly, the final part became somewhat tedious, especially when Italianate prolixity takes over. One would not want to hear the Romancero espagnol that often, but a first public performance is of course an important event.

What, then, of the first half? The full tone Howard employed for the opening of the Grosses Konzertsolo was promising, but too often he proved heavy-handed and prosaic. This is not a piece one hears very often, though, so it remained a welcome opportunity to hear the mixture of familiar, presaging the B minor Sonata, and unfamiliar. The central section proceeded in unhurried, ruminative fashion: fair enough in its way, but lacking the formal control that might have convinced Liszt sceptics. (Imagine what Maurizio Pollini would sound like in such music!) Moreover, I could not help but miss in the outer sections the effortless technique of Nikolai Lugansky, whom I had heard a few nights previously in three of the Transcendental Studies.

The ‘Weinen, Klagen’ Variations opened promisingly too, pushing ahead with clear intent. Tone colour, however, often remained unvaried. This may have been an interpretative decision, allocating one basic ‘colour’ per variation; if so, the sense of relentlessness engendered should have led to reconsideration. What might work on the organ does not necessarily transfer well to the piano. The conclusion proved seriously disappointing, Bach’s chorale (‘Was Gott tut, das its wohlgetan!’) seemingly appearing from nowhere, the final peroration strangely abrupt and anything but a crowning glory.

The Sarabande and Chaconne on Themes from Handel’s ‘Almira’ fared better. It sounded recognisably ‘late’, not least in the prevailing harmonic darkness. (And this alone should give pause for thought: how inquisitive was Liszt in 1879 to be basing an original composition on any Handel opera, let alone Almira?) Much of Howard’s reading was dignified, beautiful even, though there were curiously halting moments too. What, ultimately, he seems to lack is charisma – that and truly transcendental technique, such as one hears from the great Liszt pianists, who of course confine themselves to far smaller repertoires. One cannot but be grateful for such service rendered to the noble Lisztian cause, yet the results, especially in better-known repertoire, remain mixed.
Posted by Mark Berry at 7:47 pm