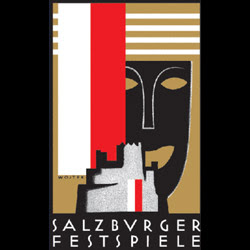 New Intendant of the Festival, Alexander Pereira, the Festival President, Helga Rabl-Stadler, and Director of Drama, Sven-Erik Bechtolf, announced the programme for next year’s Festival, first in Salzburg, before flying to London to speak at the Residence of the Austrian Ambassador. The 2012 season will see seven new opera productions, plus two concert performances (Il re pastore and Tamerlano, both from period-instrument ensembles). Two will have been presented earlier in the year at the Salzburg Easter and Whitsun Festivals (Carmen under Sir Simon Rattle and Giulio Cesare in Egitto with Cecilia Bartoli, staged by Moshe Leiser and Patrice Caurier), but five will be seen for the first time in the summer, Pereira stating adamantly that revivals will be at the very least an exception during his tenure of office, requiring continued collaboration between the same stage director and conductor.


First of the new productions is Die Zauberflöte, in a staging by Jens-Daniel Herzog. Nikolaus Harnoncourt had stated that he would no longer conduct opera in Salzburg, but Pereira enticed him back with the suggestion that Harnoncourt lead his first ‘late’ Mozart opera on period instruments. (Doubtless reactions will vary on that score: Herbert von Karajan must be rolling in his well-upholstered grave.) Wherever one stands on that matter, there is an intriguing offering to commemorate the two-hundred anniversary of Emanuel Schikaneder’s death: a staging of his ‘zweyte Theil der Zauberflöte,’ Das Labyrinth, oder Der Kampf mit den Elementen, music by the Bavarian court composer, Peter von Winter. Alexandra Liedtke directs; Ivor Bolton conducts the Mozarteum Orchestra.

A rare opportunity is afforded to hear the first version of Ariadne auf Naxos, replete with a good portion of Molière’s Le bourgeois gentilhomme. Riccardo Chailly conducts the VPO, whilst Bechtholf himself directs: a good augury for closer collaboration between music and drama. (Pereira also spoke of wanting to introduce more ballet into the Festival.) Singers include Emily Magee, Elena Moşuc, and no less than Jonas Kaufmann, who will also sing Don José alongside Magdalena Kožená in the Rattle Carmen (staging, Aletta Collins). La bohème appears for the first time at the Festival – Pereira spoke of wanting to banish any prejudice against Puccini – in a production from Damiano Michieletto, conducted by Daniele Gatti; the cast includes Piotr Beczala and Anna Netrebko.

Finally, and this is at least as much a draw as Ariadne, comes Bernd Alois Zimmermann’s Die Soldaten. Ingo Metzmacher conducts a work that cannot have been played that many times, if at all, by the VPO, in a production by Alvis Hermanis. The cast includes Alfred Muff, Laura Aikin, Tanja Ariane Baumgartner, Cornelia Kallisch, and Tomasz Konieczny. Though the production will later be seen in Milan, it is surely a high priority in these Felsenreitschule performances.

Visiting orchestras include the Israel Philharmonic under Zubin Mehta and the Orchestra Mozart under Claudio Abbado. They will both perform in a new, opening week of sacred music, ‘Ouverture spirituelle’,’ which aims to make especial use of the city’s wonderful array of churches, but also to initiate dialogue between Western Christianity and other faiths: Judaism in the first year (hence Ernst Bloch’s Avodath Hakodesh), followed by Buddhism/Shintoism, Islam, and Orthodox Christianity. Abbado’s coupling looks highly promising, comprising two works with which he has long been associated: Mozart’s Waisenhausmesse and Schubert’s E-flat Mass, D 950.

Other visiting orchestral highlights include the West-Eastern Divan Orchestra under Daniel Barenboim (Beethoven’s Sixth and Fifth Symphonies), the Gustav Mahler Youth Orchestra with Gatti (Wagner, Berg, Strauss, and Ravel, Frank-Peter Zimmermann the soloist in Berg’s concerto), two performances from the Cleveland Orchestra and Franz Welser-Möst, both including a work by Lutosławski, the Leipzig Gewandhaus Orchestra under Chailly in Mahler’s Sixth Symphony, and the Concertgebouw in Bartók and Mahler under Jansons. Gergiev will conduct the LSO in the complete Cinderella. (There are others too, so please do check the website!)

Sándor Végh’s hundredth birthday attracts two marathon concerts from ‘his’ Camerata Salzburg – Bach and Mozart; Schubert and Bartók – plus a series of masterclasses, involving musicians such as Steven Isserlis and András Schiff. The Mozarteum Orchestra’s series of Mozart Matinées continues in seven concerts, highlights including a performance of Die Schuldigkeit des Erstens Gebots, a concert of Dallapiccola, Mozart, and Holliger, under the baton of the last-named composer, and a concert of Mozart and Georg Friedrich Haas from Michael Gielen.

Finally, a few words on spoken theatre, which seems revivified under Bechtholf’s leadership. Hofmannsthal’s Jedermann will, of course, be there, but there is so much else. Andrea Brecht directs Kleist’s Prinz Friedrich von Homburg – would that the Festival in a subsequent year would stage the Henze-Bachmann opera! – and Irina Brook, Peter’s daughter, stages both Peer Gynt (in English) and The Tempest (in French, from the Bouffes du Nord). Puppet theatre is offered, in the guise of Nuremeberg’s Thalias Kompagnons (Kafkas Schloss), and the Austrian classic, Ferdinand Raimund’s Der Bauer als Millionär, as is children’s theatre (Theatre-Rites: Mojo, also to be seen at the Barbican). South Africa’s Tick Tock Productions presents a new, English-language work Trapped, directed by Princess Zinzi Mhlong. Another premiere offering is Jakob Michael Reinhold Lenz, from Theater Montagnes. Gisèle Vienne has two productions including music, whilst a Korean theatre group brings – in Korean – Hamlet Cantabile to the Salzburg stage.

Further details, including a good number of performances not mentioned, may be found by clicking here for the Salzburg Festival website.