Where the Wild Things Are, Higglety Pigglety Pop! Barbican, 3 November 2012

﻿﻿Where the Wild Things Are
﻿﻿


﻿
Marking Oliver Knussen’s sixtieth birthday came a BBC Total Immersion weekend at the Barbican: a double-bill of Knussen’s two operas written in collaboration with Maurice Sendak, Where the Wild Things Are and Higgledy Piggledy Pop! on Saturday, followed by a day of two chamber concerts, a film, and an orchestral concert conducted by the composer himself on Sunday. This co-production of the two operas with the Aldeburgh Festival and the Los Angeles Philharmonic Association was a delight. Netia Jones employs a cunning, loving mix of animation and live action to retain as much as humanly possible of Sendak’s celebrated drawings. Sometimes we see more of one than the other, though the principal characters – the boy Max in Where the Wild Things Are and Jennie the Sealyham Terrier in Higglety Pigglety Pop! – are ‘real’ throughout. How much lies their – or our? – imagination? What is real anyway? The use of animation for the monsters save at the beginning and end of the first opera – we see the singers go behind a screen and emerge at the end, and of course we hear the, throughout – heightens our questioning. The screen in neatly reversed in Higglety Pigglety Pop! so that we see the secondary characters both on stage and on film. Again, what is real? Are not both varieties of apparition and/or depiction? In the land of the Mother Goose World Theatre, all the world’s a stage – a tribute, surely, as much to Stravinsky and his Rake’s Progress tribute to Mozart, the latter parodied in Knussen’s final scene, as to Ravel. (Both Higglety and Don Giovanni end 'outside' their dramas, in bright if tarnished D major.) The repetitions of that gala performance, the time-honoured tradition of a play within a play, unsettle as they should. What do they mean? When will they stop? Again, what, and who, is ‘real’? That is very much the stuff of imaginary worlds, strongest for some in childhood, but for many of us just as powerful in subsequent stages of our lives. 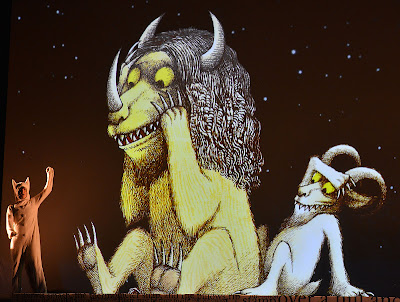 Crucially, the sense of fantasy in libretto and production is at the very least equally present in Knussen’s scores, kinship with Ravel especially apparent in Where the Wild Things Are. And we all know who composed the most perfect operatic depiction of childhood... Stravinsky sometimes seems close too, for instance in the fiercer rhythmically driven music of the second scene (Mama and her hoover), the Symphony in Three Movements coming to my mind. And the musical material itself of course delightfully pays tribute both to Debussy’s La boîte à joujoux and most memorably to Boris Godunov, direct quotation reminiscing of the Tsar’s ill-fated coronation when Max is crowned King of all Wild Things.
Ryan Wigglesworth’s direction was palpably alive to this sense of orchestral wonder and fantasy, his programme notes an exemplary tribute from one composer-conductor to another from whom he has learned a great deal. The tone of performance darkened in tandem with that of the score for Higglety Pigglety Pop! Detail was meaningful without exaggeration, for instance in the subtle pointing up of certain intervals associated with different characters. Those with ears to hear would do so, consciously or otherwise. Moreover, the orchestra’s response was as assured, as disciplined, as generous as the conductor’s direction. The Britten Sinfonia was throughout on outstanding form, thoroughly inside Knussen’s idiom, unfailingly precise without sacrifice to warmth of tone. Despite relatively chamber-like forces, at least in the string section (6.6.4.4.4), one often felt that was hearing a larger orchestra, for this was anything but a small-scale performance. Indeed, accustomed as I am to hearing the London Symphony Orchestra at the Barbican, there were many times when I should not have been surprised to discover that I had in fact been hearing the LSO.


Claire Booth headed a fine cast for Where the Wild Things Are, her Max as quicksilver on stage as vocally. Lucy Schaufer proved every inch her equal as Jennie in Higglety Pigglety Pop! Very much the singing actress, her deeper mezzo tones were perfectly suited to the darkened tones of the score. There is something a little dangerous about Jennie and the acting world of ‘experience’ for which she forsakes her comfortable home – yet in a sense all children must at some point act similarly.  All members of the two casts, however, were richly deserving of praise, a particular favourite of mine Graeme Danby’s surreal, apparently innocent Pig-in-Sandwich-Boards. These performances came across as true company efforts, a state of affairs doubtless deepened by ‘experience’ in Aldeburgh and Los Angeles.