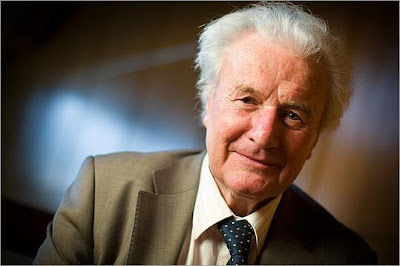 A touching documentary (click here) will be available until Friday. Thoughtful, profound, without intellectualising, this is the Sir Colin Davis we knew and loved, above all through his music-making. Haunted by death but not afraid of it, it is the Davis we heard in so many of his later performances. It also has some wonderful footage of Sir Colin's earlier career, including a performance of Mozart's Clarinet Quintet.


It is a difficult, indeed impossible, task, but I thought I should select five great live performances, not necessarily 'the greatest', if such a thing should exist, but which nevertheless touched me greatly and whose memory continues to do so. I have restricted myself to those about which I have written here, so we are dealing only with the period 2007-12. You may click on the titles to read the full reviews. (Numerical position in the list indicates nothing.)

Not quite his final performance, but one of the last, and the last time I heard him. The orchestra and chorus who adored him, the London Symphony Orchestra and London Symphony Chorus, could not have done more. It was fitting, no doubt, that it should be with the composer for whom he had done far more than anyone else, Berlioz, that I should bid Davis farewell. At the time, I concluded (and as I sad, the full review may be read by clicking on the title): 'Cyclic completion, which if not exactly symphonic is not entirely un-symphonic, brought a satisfaction which, if not of the nature of a peace that passes all understanding, nevertheless passed beyond mere understanding. We heard the wisdom and cogency of a performance that seemed to sum up the devotion of a career – except that, nowadays, whenever one thinks that Sir Colin has crowned that extraordinary career, one is likely to experience a subsequent coronation a month or so later.' Though it was to prove a final coronation, what a coronation!

With the same forces, but at the Proms rather than in St Paul's Cathedral for the City of London Festival, this was a performance of the previous year every bit as profound, as granitic, as ready to wrestle with the angels, whoever they were. Again, this was a conductor of wisdom looking death - and Beethoven - squarely in the face and communicating the consequences. I know of no performance since Klemperer - certainly not the vaunted Bernstein, or indeed Karajan - who came so close to unlocking the secrets of this most enigmatic and perhaps greatest of all Beethoven's works. If anything, and if only on account of the work itself, it was a still more astounding performance than that of the Berlioz. Sir Colin had a point when, in the aforementioned documentary, he described this as the last great Mass (Requiem Masses being another matter). Whatever one thinks of that claim, he conducted it as if it were, and with all the consequences to which such a final reckoning with the Almighty might lay claim.

This oratorio will always have a very special place in my heart, not only because it - along with The Seasons - was the subject of what I count as my first piece of academic work, my third-year undergraduate dissertation. Its combination of joy, sublimity, and profound humanity would have seemed made for Davis, and so it was, though this seems - rather surprisingly - to have been the first time he had conducted the work. Once again, the LSO and LSC did him proud, even if the solo singing were patchier. Indeed, I thought then, and continue to do so, that even the legendary Karajan Berlin recording had almost met its match here. If Karajan's soloists will surely always have the edge, orchestra, chorus, and perhaps even conductor may well have excelled further at the Barbican. At any rate, it was a model performance, seemingly effortlessly variegated and yet unquestionably sure of divine - and human - purpose.

Mozart's music was of course Davis's greatest love, as it is mine. This was quite simply a performance such as I could never have dared think I should hear. In an age tormented by absurd ideas of 'authenticity', about which he would from time to time most trenchantly express his views, it had become almost unheard of to hear Mozart treated as music, let alone both to resound so profoundly and to ravish the senses so beautifully and yet so cruelly. In Mozart's most perfect opera, so ludicrously misunderstood by many from at least Beethoven onwards, one should experience, yet rarely does, a reckoning with the world's darkness that is both tragic and anything but. The experience became all the more painful given the contrast with Jonathan Miller's tawdry, anti-Mozartian production; Sir Colin's and Mozart's victory somehow became all the more sweetly, deliciously, and yes, tragically ambivalent.

Not quite his Berlioz operatic swansong, for I should later hear a wonderful Royal Academy Beatrice and Benedict, this was a performance that almost vied with the stunning 2000 Proms account of The Trojans. (That would certainly have been included, had I been writing at the time.) Again on the home soil of the Barbican with the LSO and LSC, Sir Colin communicated, relished Berlioz's mercurial vision as scintillatingly as anyone can ever have done - the contrast with a hard-driven, largely uncomprehending performance I should hear soon after from Valery Gergiev was telling - but form was of equal importance. As I wrote at the time, 'The authority with which he approached the score was evident from the first to the last bar, and the Overture set the scene for both work and performance. Orchestral weight and lightness of touch stood in perfect equilibrium. There was never any question, given the conductor's long experience with this work and with Berlioz's œuvre as a whole, that he knew precisely where he was going and that every episode would fall precisely into its allotted place.' If that makes the performance sound dull, then I have failed, and I fear that I have. For there was here, as in the performances above, an apparently straightforward 'rightness' to the performance, which opened up vistas not for a physical stage, but for a concert-performance theatre of the imagination. And for Berlioz, imagination is everything.