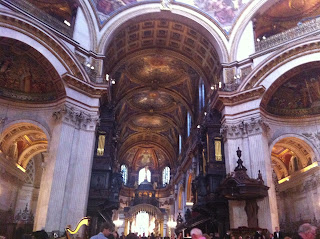 The 1713 Treaty of Utrecht, which established the Peace of Utrecht, concluded the long-running War of the Spanish Succession and signalled the final nail in the coffin for Louis XIV’s aspirations to universal monarchy. Accompanying commercial treaties – the Treaty itself actually a series of treaties – laid the way for economic expansion, so the ‘peace’ seems an especially appropriate settlement for the City of London Festival to be celebrating its tercentenary. Given the death toll, variously estimated at somewhere between 400,000 and 1.251 million, I could not also but help think of Voltaire’s Candide, in which the tradition of the military Te Deum joins the list of items for excoriation:

There was never anything so gallant, so spruce, so brilliant, and so well disposed as the two armies. Trumpets, fifes, hautboys, drums, and cannon made music such as Hell itself had never heard. The cannons first of all laid flat about six thousand men on each side; the muskets swept away from this best of worlds nine or ten thousand ruffians who infested its surface. The bayonet was also a sufficient reason for the death of several thousands. The whole might amount to thirty thousand souls. Candide, who trembled like a philosopher, hid himself as well as he could during this heroic butchery.


At length, while the two kings were causing Te Deum to be sung each in his own camp, Candide resolved to go and reason elsewhere on effects and causes. He passed over heaps of dead and dying, and first reached a neighbouring village; it was in cinders, it was an Abare village which the Bulgarians had burnt according to the laws of war. Here, old men covered with wounds, beheld their wives, hugging their children to their bloody breasts, massacred before their faces; there, their daughters, disembowelled and breathing their last after having satisfied the natural wants of Bulgarian heroes; while others, half burnt in the flames, begged to be despatched. The earth was strewed with brains, arms, and legs.

It is no coincidence that the eighteenth century was especially ripe with schemes for ‘perpetual peace’, from writers such as the Abbé de Saint-Pierre, Rousseau, and Kant. Not that any of them had the slightest chance of being considered as anything but wild utopianism, as the European states system continued to dictate foreign policy. (We might bitterly recall New Labour’s claim to have been adopting something called an ‘ethical foreign policy’ whilst launching a series of murderous invasions.)

Returning to 1713, Handel, newly settled in London, in today’s unlovely parlance an ‘economic migrant’, wrote his Te Deum and Jubilate for the Chapel Royal, and had them formally premiered in St Paul’s Cathedral in July, as here, though a public dress rehearsal had actually taken place in March of that year. It took my ears a while to adjust to the notorious St Paul’s acoustic, the dome swallowing up so much of the sound, and the reverberation continuing longer than anywhere else I can think of. Jos Vermunt wisely did not push the music of the Jubilate; trying to do battle with the echo would only result in victory for the latter. There were even times when that echo helped, or at least added a notable additional quality to the performance, for instance in the halo surrounding the words ‘Holy, Holy, Holy’. In this relatively early Handel, there are already borrowings from some of his Italian music, but also kinship conscious or otherwise, with French ceremonial music – Lully and Charpentier – also made its mark, albeit with a welcome lack of bombast. There is plangency too, here conveyed with skill both by the ECO, oboes especially, and the soloists. ‘When thou tookest upon thee to deliver man’ was taken wonderfully slowly, and successfully sustained, for which particular credit should go to mezzo-soprano, Kamilla Dunstan. The following a cappella quartet, ‘When thou hadst overcome the sharpness of death’ seemed to look forward to the unaccompanied chorus, ‘Since by man came death,’ from the Messiah, benefiting from excellent balancing between the soloists; it likewise is followed by concerted rejoicing. Echt-Handelian trumpets made a fine appearance upon ‘O Lord, save thy people,’ though curiously accompanied by a lengthy ad lib from an audience noseblower; his command of rhythm was more commendable than his timing. All of the soloists acquitted themselves well. Having already mentioned Dunstan, I should also single out the baritone, Martin Hässler, who combined beauty of tone with verbal clarity and understanding; I hope to hear more of him.

Choral singing, somewhat hampered by the acoustic, seemed to gain a degree of focus in the premiere of Adrian Thomas’s The Idea of Peace, the Toonkunstkoor Utrecht now joined by choristers from Utrecht Cathedral Choir School. The City of Utrecht had commissioned the work, which here received its first performance. Alas, whilst performances, not least from the two soloists, Gillian Keith and Mark Wilde, seemed excellent, the work itself disappointed. Hampered by an over-enthusiastic gathering of texts from disparate sources by Arjen Eijenraam, Thomas had little success in transforming lines such as ‘People are infinitely precious/Take them as they are,’ or ‘Bring dialogue, benefit, and joy into the world’, into something idiomatically vocal. He was certainly fortunate, however, in having Keith to despatch words of Queen Anne, ‘We have this business of Peace so much at heart’, with pinpoint melismatic skill. (The accompanying chimes sounded an uncomfortably ‘New Age’ note, however.) Vague orientalism, for instance in a prominent cello solo, put me in mind of another occasional piece, from one Francis Grier, my first Cambridge college, Jesus, endured for its quincentenary; the sole comfort from this work’s protracted progress was that none of us would be likely to hear it ever again. If soft-centred, anodyne harmonies, allied to excessive reliance upon the harp and weirdly jaunty settings of words such as ‘Non Violence, Truthfulness, Tolerance/Respect and Partnership not only be/renewed though Kingdoms, States/Dominions and Provinces...,’ be your thing, then you might have looked more kindly upon it. Or, as a tedious refrain had it, ‘Listen, talk, and learn and flourish together,’ might have been a little more the order of the day; to my ears, it sounded more akin to the soundtrack for a primary school ‘learning activity’, run hopelessly out of control. How one longed, amongst this paradoxically glib worthiness, for a true message of the horrors of war: A Survivor from Warsaw perhaps, or Il canto sospeso.

What one longed for still more was the return of Handel, whose Jubilate therefore proved all the more welcome. Dunstan’s duetting with trumpet proved a delight, as indeed did all the expressive instrumental and vocal solos (Handel limits himself to three here). The darkly chromatic setting of ‘For the Lord is gracious, His mercy is everlasting,’ peered forward towards Mozart, who would surely have loved Handel’s setting, had he known it. A resplendent final doxology brought together the ECO and choir in harmony infinitely more convincing than that attempted during the previous piece, enthusiastically presented though it might have been. Handel nevertheless emerged unscathed, ready for another three hundred years.