A delightful end-of-term show from the Royal College of Music International Opera School. Ravel’s two operas were performed with charm, style, and not inconsiderable magic – and I am sure I should have said that even had I not sampled some of the Institut français wine beforehand (a definite recommendation, should you be looking for somewhere to drink in the bewilderingly tricky environs of South Kensington).

James Bonas’s stagings treat them as independent works, which of course they are; there is no discernible attempt to forge a link between them, but then nor is there any need to do so. With the help  of Ruari Murchison’s designs, we thus find ourselves for the first half where we should expect to do so: the shop of a Toledo clockmaker. The clocks that the muleteer, Ramiro, must carry up and down the stairs and the staircase itself are our guiding presence: plot device and environment working well together. Costumes hint at a Frenchman’s view of Spain, reminding us not only of the circumstances of this particular opera but also of the old quip, fair or otherwise, that the best Spanish music has been written by Frenchmen. The characters are sharply directed, enabling the young singers’ considerable acting and vocal abilities to shine to the full.

Kezia Bienek offered a properly feminine Concepcíon, housewifely languor and determination to avail herself of what her visitors can – and cannot – provide alternating as the situation demanded. Peter Aisher deputised for an indisposed Nick Pritchard as her husband, Torquemada, though one would hardly have known; he seemed fully at ease with role and production alike. Gyula Rab’s Gonsalve provided humour – the very parody of a poet’s self-absorbed conceit – and vocal excellence, well partnered in those respects by his rival, Bradley Travis’s Don Iñigo Gomez. And last but certainly not least, Luke D Williams offered a fine assumption of the muleteer’s role, this Ramiro’s vocal and physical attraction perfectly clear, whilst he remained properly clueless about the games unfolding around him.
The nocturnal setting for L’Enfant et les Sortilèges contrasted appealingly with the Spanish sun of its predecessor. There was something properly dream-like, even trippy, to the stage realisation of Colette’s and, above all, Ravel’s world. We were free to follow our own interpretations, Freudian or otherwise, and there was certainly implied menace to an opera that emerged as far from innocent; at the same time, the production does not seem to impose any particular view upon us. It evokes, maybe even provokes, but does not constrain. 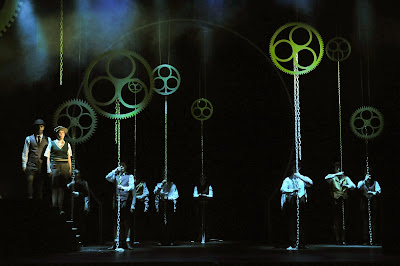 The Royal College of Music Opera Orchestra under Michael Rosewell had proved excellent during its Spanish hour, and once more did so here, though perhaps there is still more opportunity for it to shine in L’Enfant. Despite its smallish size (strings 8.6.4.3.2), it never sounded undernourished; indeed, it sounded just right for the Britten Theatre. Ravel’s heady blends of wonder and precision, of Gallic suavity and infectious orientalism, sounded perfectly fitted to the child’s adventures on stage – though arguably I should have expressed that the other way round. Again, the cast offered a great deal to enjoy; I heard not a single weak link. Rose Setten captured admirably the truculence and receptivity required of the child, Maria Ostroukhova a splendid complement both in maternal and other roles. Without listing every assumption, I should especially like to single out He Wu’s Princess: again precise in musical terms, yet ambiguously inviting with respect to the drama. Is this a child’s awakening? ‘Probably yet not necessarily', remains the answer – as so often proves to be the case with Ravel.
Posted by Mark Berry at 7:26 pm