Once again, we find ourselves thanking an unrepresentable being for Welsh National Opera’s commitment to its mission. It is a sad state of affairs when a season that includes both Boulevard Solitude and Moses und Aron is considered exceptional, but it is – and is all the more so when one contrasts such seriousness of purpose with the endless revivals of La traviata which, Die Frau ohne Schatten notwithstanding, seem to occupy so much of the Royal Opera’s effort. That said, if the Royal Opera has not undertaken what would be only its second ever staging of Schoenberg’s masterpiece – the first and last was in 1965, long before most of us were born! – then at least it has engaged in a very welcome ‘WNO at the Royal Opera House’ relationship, in which we in London shall have the opportunity to see some of the fruits of the more adventurous company’s endeavours.


All of that would be more or less in vain, were the results not to attain the excellence Schoenberg demands. They were, in pretty much every respect, any of the doubtless inevitable shortcomings being of relatively minor importance. This was probably the finest work I have yet heard from Lothar Koenigs – to whose partnership with David Pountney we clearly owe many thanks.  There can be no faking the necessary depth of musical understanding in this score, any more than there can be in Wagner or Brahms (or, indeed, anything that matters). Koenigs’s textual clarity and clarity of purpose not only enabled the drama to develop; they were in good part the Wagnerian embodiment, even representation, of the musical drama – not the least here of Schoenberg’s dialectics. There were occasional slips by the WNO Orchestra, but in no sense did they detract from a wholehearted contribution, which might have suggested that the work had been in its repertoire for years. (Recent Wagner, Berg, and indeed Henze will have done no harm, but even so…) 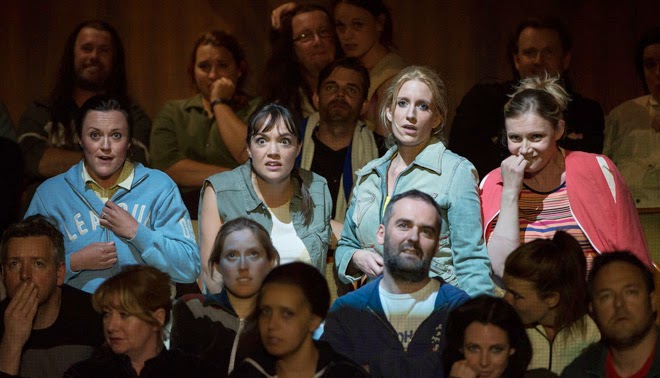 Perhaps the most exceptional work of all – though opera is, or at least should be, one of the supreme elevations of collaboration over miserable, bourgeois ‘competition’ – came from the WNO Chorus. In an interview to accompany Pierre Boulez’s second recording of Moses, Schoenberg’s great – alongside the very different Michael Gielen, his greatest? – interpreter and critic remarked:  ‘People always say that it’s not an opera but an oratorio, which Schoenberg later turned into an opera. That interested me, because I disagree with it. The chorus, for example, is the most important character in the opera. It’s like a chameleon, speaking for or against, sometimes even internally divided or emphatic in its support of one particular party; it is angry, it is docile, it comments on the action.’ Musically and dramatically – indeed, quite rightly there seemed little distinction to be made – the chorus succeeded in fulfilling Boulez’s and Schoenberg’s expectations. Whether en masse, soloistically, or at various stages of in between, whether singing, speaking or at various stages of in between, Schoenberg’s highly charged and often ravishingly beautiful choral writing – I was often set thinking of his psalm settings – were faithfully, viscerally communicated. And of course, communication, both its necessity and its impossibility, is very much the thing in this of all operas; or rather, it is one of the things, all of them, like the score itself derived entirely from a single row, proceeding from the necessity and impossibility of representing the Almighty Himself. If indeed that is who He is, for at least at times, an element of doubt should and did set in, with respect to whether Moses is on the wrong track all together. This is and was a drama, not a tract.


I had my moments of doubt concerning the production too. Jossi Wieler and Sergio Morabito, as revived – very well, insofar as I could tell – by Jörg Behr present the entirety of the action in a single, courtroom venue. Law  is of course a concern of the drama in several respects, the law-giving properties of the twelve-note method involved in a complicated, dramatically generative relationship with Mosaic law and the law of Creation itself. Moreover, as Aron points out to Moses, the Tables of the Law are ‘images also, just part of the whole idea’. That said, the idea or ideas of law do not seem to be especially emphasised, and – without wishing for some entirely impractical as well as undesirable Cecil B. de Mille Biblical ‘epic’ presentation, which would make only too clear the truth of Adorno's charge that grand opera prepared the way for popular cinema – it is difficult to feel, at least at first, that there is not an element of dramatic constriction in the monothematic scenic realisation. (I am not entirely sure what was meant by the description of having been ‘based on an original design by Anna Viebrock’, given that no further design work was credited.)

And yet, so long as one is prepared to do some thinking – and anyone who is not should not be allowed anywhere near this opera – it is perfectly possible to glean a great deal; what appears to be constriction was in some sense also mental liberation, which again is one of the crucial dialectics at work in the drama itself, concerned as it and indeed all modern philosophy are with the Kantian antinomy between freedom and determinism. Not only can the courtroom – if indeed that is what it was – readily convert itself, sometimes with a little scenic rearrangement but above all through the engagement of our minds, into a venue for political and/or religious activity or, through Aron’s manipulative-representational skills, into a cinema, upon which the crowd can watch the orgy, as we watch the crowd. We, the receptive and creative audience – at least, that is what we should be – have to employ our minds to represent what the Israelites were seeing, and thus to engage in that very necessity and impossibility of representation of which Moses and Aron spoke and sang.  That is not to say, of course, that we should never see what goes on; Reto Nickler’s excellent Vienna production (available on DVD, under the inspired musical direction of Daniele Gatti, with the Vienna orchestra playing this music as only it can) shows what can be done with modern communicative messages of advertising and pornography. But what first seems as though it may simply be a cowardly – or even financially necessary – abdication of responsibility is revealed to be something much more interesting and, at some level, even provocatively Schoenbergian.


John Tomlinson’s assumption of the title role was predictably imposing. There was a good deal of what Gary Tomlinson has called the ‘Michelangesque terribilità’ of Schoenberg’s flawed hero, though I could not help but feel that the melodrama was overdone in the final scene. Still, the tragic grandeur, very much in the line of Wotan,  of Tomlinson’s Moses was unquestionable. Although he seemed to have tired a little in the first half of the second act, Rainer Trost’s Aron proved a fine foil. I am not sure I have heard so clear a contrast between Sprechstimme and sinuous twelve-note bel canto (with a good deal of Siegfried  et al. thrown in). Spatial matters played their role in the first act; placing on stage heightened the unbridgeable contrast between the two characters competing on unequal yet still justified terms. (One should never fall into the trap of saying that Moses is right and Aron is wrong; Schoenberg tilts the scales but remains some way from upending them, and there are certainly occasions when Moses is shown to be unambiguously, even unimaginatively in the wrong.)


Were I to proceed to hymn musico-dramatic excellence in the smaller roles, I should probably find myself simply repeating the cast list. However, I shall, in the spirit of the work, attempt the impossible, and single out Richard Wiegold’s stentorian Priest, the exemplarily alert contributions of Daniel Grice and Alexander Sprague, and the – literally – unearthly beauty summoned up by the chorus of six solo voices: Fiona Harrison, Amanda Baldwin, Sian Meinir, Peter Wilman, Alastair Moore, and Laurence Cole.  For a work that struggles, like Aquinas, with a theological via negative, there was a great deal to be positive and thankful about. Three cheers to WNO!