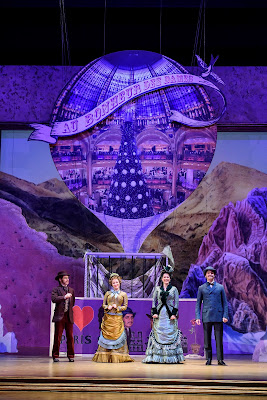 Before saying anything else, I must commend the Royal Opera on broadening its repertoire. Anything that leavens a diets of endless Traviatas can only be a good, or at least a better, thing. Moreover, to perform a work that had not previously been given at Covent Garden is a better thing still. Alas, Chabrier’s opéra bouffe did not, on the whole, have a good night, and, although I know it has its admirers – the ‘lighter’ the music, the more militant the admiration tends to be – I really cannot claim to have been won over, at least insofar as I could tell from Mariame Clément’s confused production.

Clément never seems to be clear – or at least I was not – whether what we see might be intended ironically or not. Is the cod-mediævalism of the set designs intended to be amusing? I really have not the faintest idea, likewise with respect, more disturbingly, to its orientalism. A post-modern hotchpotch, is, as usual with such presentations, very much the thing, almost daring one to seem too serious, too intellectual, by requesting some degree of coherence. Ambiguity is not necessarily a bad thing, yet few of the metatheatrical possibilities go for anything very much; the creation of new characters and dialogue might be said to be frame the work, but ultimately to little purpose. (I was left with the impression that the purpose was really to create a role, in English, for Chris Addison.) Clément tries too hard, perhaps: there are too many silly things at which to gawp, and which do not cohere. (One might say that of the opera itself, I suppose, but let us at least try to give it the benefit of the doubt, without initially resorting to the disingenuous, ‘well, it’s supposed to be incoherent’.) Spectacle, especially in the French tradition, can be an important tool of drama, but here Wagner’s accusation – yes, I am doubtless too Teutonic by half – of ‘effect without cause’ seems far more just here than it was for Meyerbeer. Only people who think the appearance of a hot air balloon or a large elephant is intrinsically amusing – and there seem to have been many such people, I grant you – will have escaped the feeling of tedium during the lengthy progress of the evening. 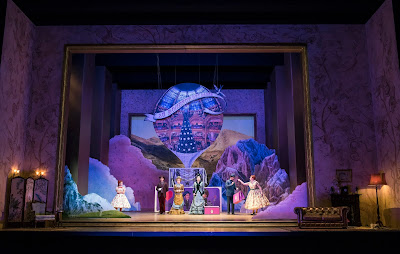 For the real problem is, of course, that Meyerbeer could – and should – work very well at the Royal Opera House; the great pity of the Royal Opera’s Robert le diable was the director, Laurent Pelly’s inability to take it seriously. (That and, of course, the deadly conducting of the dread Daniel Oren.) A work such as L’Etoile would surely be far better off in a smaller, indeed a much smaller, theatre. Not only would one see the artists on stage, better to respond to their facial expressions, their shrugs, their other gestures; there would be no need to inflate the scenic representation beyond something this slight work can bear. As I said, there is nothing to bring out the protective impulse in certain music-lovers than to dare to express scepticism concerning something that is ‘light’. One immediately becomes humourless, joyless, all the rest of it. It certainly would not help one’s cause with them to point to the Leipzig Gewandhaus and its motto, ‘Res severa est verum gaudium’. But surely it is as ridiculous to claim that all ‘light music’ is good as to claim that all ‘serious music’ is. Palestrina is not Parsifal; I am not sure that L’Etoile deserves to be cherished as, say, the best of Offenbach, or even middling Offenbach. Silliness becomes wearing rather quickly; excellent satire does not.

Matters might have been helped, had Mark Elder, however, been a little less ‘serious’. The evening’s progress was fitful, one first-act duet in particular plodding rather than sparkling. Taken on its own terms, the playing of the Orchestra of the Royal Opera House was impressive, yet I could not help but think that zippier direction would have helped it along. It was not actually an especially long evening, but it felt like it, the first act less than an hour felt to me considerably longer than its equivalent in Parsifal. And it was difficult, to put it mildly, to feel that as much was at stake. 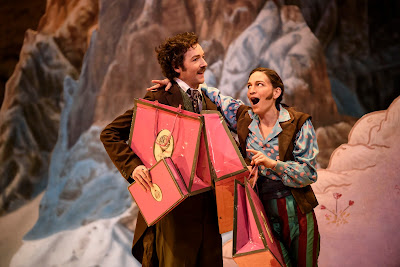 The singing was generally good, though, as indeed was the acting. Christophe Mortagne’s King Ouf tilted more towards the latter, but perhaps that is as it should be. Kate Lindsey offered a spirit and, at times, almost touching performance in the role of the pedlar, Lazuli, however tiresome the antics surrounding him/her. Addison and his companion, Jean-Luc Vincent proved good company members, in no sense jealous of the limelight, although I could certainly have done without the former's Sherlock Holmes set-piece. If Simon Bailey’s astrologist Siroco veered somewhat uneasily between French and English, that was really the director’s responsibility. The four visitors, Julie Boulianne, François Piolino, Hélène Guilmette, and Aimery Lefèvre performed well throughout. Alas, neither work nor performance approached the sum of its parts. One may or may not have been supposed to care about the characters, but should one have felt such utter indifference to the action, such as it was?