I can say without any hesitation, still less exaggeration, that this is the best staging and performance of a Handel opera I have seen. Olivia Fuchs’s production takes us to AMNESIA, an S&M club with mind-altering substances – and activities – ready to hand, to foot, and indeed to any other part of the body so inclined or so compelled. Indeed, I do not think I have ever seen quite so much onstage crotch-grabbing, whether auto-erotically, or with partners. The sorcery of Alcina’s enchanted island lends itself readily to such a relocation. In the twinkling of an eye, or the snorting of a line, the transformation of pleasure-seeking fashion-victims into drugged captives perhaps speaks more clearly to us than would a spell that turned heroes into beasts, rocks, trees, or streams. (We still have the libretto, in any case.) I said ‘more clearly’, but perhaps I should have said more deeply, for the underlying evil of the one, especially when assisted by the instruments of sexual domination, is more apparent than it might be in a merely ‘picturesque’ version. Yannis Favoris’s stunning designs and Jake Wiltshire’s lighting – the headrush moment of transformation a memorable flash of inspiration – prove especially provocative, given the location: Hackney’s Round Chapel. It cannot have been quite what nonconformist founding fathers had in mind for their place of worship (at least not openly). All is true to the adventurous spirit of the Baroque, never ground down in futile attempts to recreate its alleged letter. 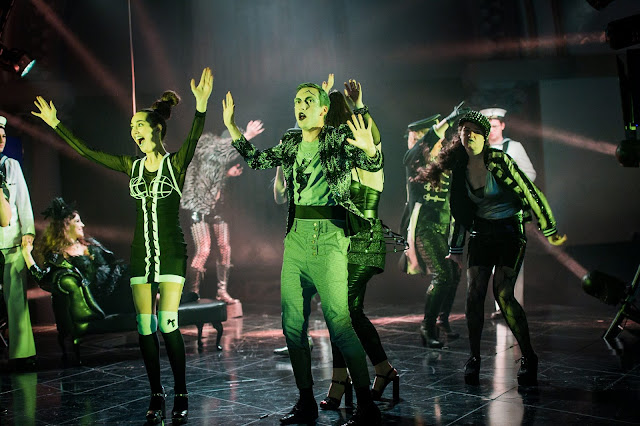 Not that the Konzept becomes too over-bearing; the human relationships, such as they are, become more prominent as the opera progresses. If anything, that is the problem for me: not with the production, but with the opera itself, or rather with my old bugbear of Handelian opera seria. There is some of Handel’s very finest music here, but the requirements of the genre, even when so much of the music is first rate, do tend to tedium, and militate against my ever especially caring about any of the characters. It is certainly not that opera seria must be like that, nor is it that Handel must be like that; in the latter case, one has only to turn to his great oratorios. Perhaps the opera might have been more generously – or ungenerously, according to one’s standpoint – cut. The role of Oberto, created for the boy treble, William Savage, was eliminated completely, but during the second and third acts, the succession of recitative and aria becomes a little wearisome. (Here, the opera was given with a single interval.) How welcome a trio was when it finally came. However, in a production designed as a showcase for splendidly talented young singers, one can understand why not, looking kindly upon the work’s undeniable longueurs.

Singers are, of course, often especially drawn to Handel; one can readily understand why. Clean lines, a consummate professional’s understanding of the voice and of vocal types, ample opportunities for display, with sometimes hair-raising coloratura: those qualities and more were all on offer from an exceptional cast. Ebb and flow between the characters, dramatic as well as musical, was well conveyed, Lorena Paz Nieto’s Morgana quite rightly shone most brightly in the first act, seductive in her cruelty. Emma Stannard and Hanna Poulsom traced the transformations of Ruggiero and Bradamante with considerable emotional depth. William Blake’s Oronte likewise very much came into his own as his character did too; he makes a highly credible doorman too. Richard Walshe made the most of his role as the tutor, Melisso; his bass as sharply focused as it was dark of tone. If, earlier on, Meinir Wyn Roberts’s intonation was not quite what one might ideally have hoped for in the title role, that should not be exaggerated; her performance grew in stature as the evening progressed, both emotionally and technically. There was, moreover, something of a Sutherland-like edge to her tone, which certainly helped mark out the role and its performance history. Members of the chorus, whether individually or corporately, impressed greatly throughout.


The orchestra, too, was on excellent form, certainly the finest I have heard in a Handel opera staging. Warm, stylish, never precious, it was conducted with deep understanding, lightly worn, of Handel’s protean demands by Iain Ledingham. Tempi were varied, without exception well chosen, and with a fine appreciation of how individual numbers might contribute to a greater whole. The contribution of the solo cellist to his obbligato aria was simply outstanding; I could have listened to him all night. A rollicking pair of horns truly invigorated proceedings, very much as recorders would soothe them. Three cheers, then, once again to a Royal Academy Opera performance of the highest order.