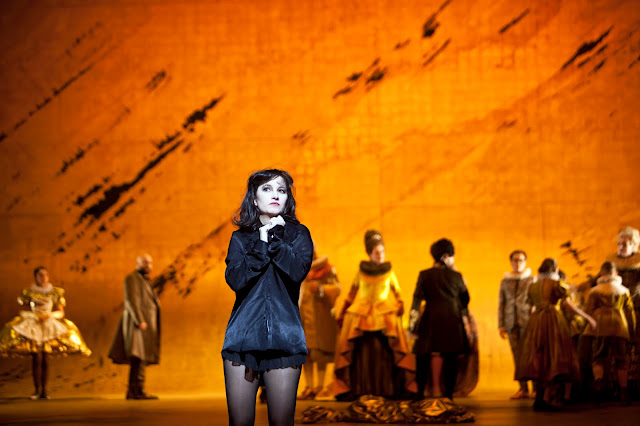 The Staatsoper Unter den Linden is now reopen for good. That re-reopening, as it were, has taken place with two new productions of two favourite works of mine: Hänsel und Gretel (which I shall also review shortly) and L’incoronazione di Poppea. I wish I could offer a wholehearted welcome to this production of Poppea, not least as my final instalment in rather a wonderful Monteverdi year, the highlight of which was surely an RIAS Kammerchor Vespers, conducted by Justin Doyle (see also interview here). Eva-Maria Höckmayr’s production offers, alas, little in itself, almost a non-production, whilst the musical performances were somewhat mixed.


Let us start, however, with the good news, which was very good news indeed. In what I believe was her first role in a Monteverdi opera – madrigal performances and much other early music notwithstanding – Anna Prohaska truly shone in the title role. She can certainly act, and did, called on, like much of the cast, to be onstage for an almost absurd proportion of the evening. There was, then, no doubting her stage presence; but nor was there any doubting her vocal presence. Never forced, ever audible, increasingly imbued with darker, richer tones than I recall when first hearing her, without any sacrifice to clarity and cleanness of line and words, Prohaska surely offered a performance that would have made anyone wish to hear her again, whether in Monteverdi, Nono, or somewhere in between. Her Poppea, moreover, was no one-dimensional schemer, no mere sex-kitten, although she certainly offered plenty in the way of allure and manipulation; this was a woman reclaiming a woman’s role, certainly not apologetic, yet unwilling simply to have as a male projection – be that Monteverdi’s, Giovanni Francesco Busenello’s, ours – might have her act.

Her leading men, as it were, also offered intelligent, multi-dimensional performances. Max Emanuel Cencic’s Nerone was occasionally a little on the squawky side, yet only occasionally. Otherwise he judiciously, even provocatively, balanced the character’s vanity and sexual allure, for if Poppea is to be more than merely a male projection, then surely the other characters, male and female, need to come more into their own. Ottone is, more often than not, a thankless role – almost a Don Ottavio for the seventeenth century. Xavier Sabata, though, gave him depth and greater ambition and nastiness of his own than one often encounters – without that diminishing his helplessness in the arms of Fate. Jochen Kowalski, who has had a long, distinguished career not only as a countertenor, but as a countertenor in Berlin, tended, alas, to suggest that that career should probably draw to a close. Perhaps it was just an off-night, but here he was barely capable of singing countertenor at all, proving more successful when giving up that good fight to sing instead as tenor. He still had stage presence; for the most part, that was all.

Rather to my surprise, Katharina Kammerloher’s Ottavia proved variable, less sure – or indeed beautiful – of line than most performances I have heard from her. Franz-Josef Selig, as ever, offered a thoughtful performance as Seneca, alert to the character’s irritating side – not only as seen through the eyes, or heard through the ears, of Nerone and Poppea. Evelin Novak’s Drusilla impressed too, as did Mark Milhofer’s deliciously camp – yet crucially, eminently musical – Arnalta. Gyula Orendt rose above his announced ailment to give notable performances, which doubtless could have been finer still, as Liberto and Lucano. Most of the smaller roles were well taken, often by members of the company. Quite why children were engaged to double the gods in the Prologue I have no idea; moreover, whilst it is certainly a tall order to ask children to sing Monteverdi at all, let alone on stage, the audience probably deserves to hear voices that are vaguely capable of remaining in tune.

Diego Fasolis made heavy, unvaried weather of the score. Many current ‘Early Music’ clichés were present, including the irritating addition of ‘colourful’ percussion. It was a relatively large band for Monteverdi in all: nothing wrong with that in principle, but it did have me wonder why we were hearing period instruments. I do not think I have heard a more dully conducted account, closer to a failed attempt to copy Nikolaus Harnoncourt than to something livelier, whether at the ‘period’ or – one can but hope – the Leppard end of the spectrum. Might it not, moreover, have been an occasion to look to a composer’s realisation of the score, say Krenek’s or Dallapiccola’s, or to commission a new one? The Staatskapelle Berlin would certainly have been a vocal sight for sore ears, much of what we heard resembling – although it certainly is not – acres of dullish recitative. Why, moreover, in this version credited to Fasolis and Andrea Marchiol, did we hear material interpolated from elsewhere, such as L’Orfeo? It was hardly ‘authentic’, in any sense, offering little more than a longer evening. Poppea is not a short opera; here it felt far longer than it should.

As for Hockmayr’s production, I struggled for the most part to find one, beyond a cursory nod to a threadbare metatheatricality that has degenerated into mere fashion. From Jens Kilian, a single, undeniably impressive golden set, with intriguing geometrical possibilities – circular and otherwise – promises much, as does Julia Rösler’s ‘punkish Renaissance-Baroque’ costumes, Nerone and Poppea perhaps more, yet not entirely, contemporary (to us). I had the sneaking impression, though, however erroneous, that the singers had largely been left by Hockmayr to get on with it. There is, at least for me, no obvious concept, other than the characters being all as bad as each other: hardly original, and actually rather dull. Yes, they all have their flaws; neither Ottone nor Ottavia is a paragon. There is surely room for greater differentiation, though, differentiation which need not lead to moral judgement. And so, in the final scene, Poppea’s sudden trauma at her elevation, unforgettably portrayed by Prohaska, seems to come out of nowhere. Likewise the frankly silly twist that has Nerone wander off with Lucano. Yes, of course the two are close, and will remain so, sexually and otherwise: the orgy has shown us that. But surely to have Nerone already opt so obviously for another rather than to remain omnivorous seems little more than an unprepared cop out. Perhaps Hockmayr had thought this all out and either it did not come across very clearly, or I was missing something. Perhaps.