‘We live now in a time of refugees.’ With those words, Simon Rattle opened his typically engaging spoken introduction to this concert of works – if the Genesis Suite may be called a ‘work’ – by émigré composers, of whom a good few certainly count as refugees themselves. Indeed we do. Having spent the last year at work writing a book on Arnold Schoenberg, I should know. And whilst it would be self-indulgent to describe myself as a refugee, I too, tired and sickened at the political condition of my country, felt it necessary to leave during that time – and to leave for what, ironically, has now become the greatest place of refuge on earth: Germany. I also visited Los Angeles as part of my research last year. Not only did I visit Schoenberg’s house, where I was kindly received by his surviving sons and their families, but I was also kindly taken on a tour of émigré houses by Alex Ross; two of the sites we saw were the houses of Ernst Toch and Igor Stravinsky (the latter, in Beverly Hills, somehow fittingly obscured from any sort of public view).

It was, then, an exciting prospect for me to hear the British premiere of this composite work, the Genesis Suite, in its entirety, as well as rather a fitting one for the first note of live music I heard in 2018 to be by Schoenberg. I should probably say something briefly about the Suite itself, since it may be unfamiliar. (Alas, the programme note, by Neil W Levin, was not entirely reliable, especially – if predictably – concerning the relationship between Schoenberg and Stravinsky.) It emerged from a likeably bizarre project by the Hollywood musician and ‘personality’, Nathaniel, ‘Nat’, Shilkret. According to his autobiography, Shilkret had, during a Mid-West roadtrip, asked people ‘what records they would like the most, and invariably it was the Bible. This gave me the idea of starting the Bible at the beginning: Have the text read and write music to help the beauty of the text. I decided to call the record album the Genesis Suite.’ For the six stories he selected, up to and including the Tower of Babel (Stravinsky), he recruited Schoenberg for the void prior to Creation (Shilkret himself), Darius Milhaud, Alexandre Tansman, Ernst Toch, and Mario Castelnuovo-Tedesco. ‘I had tried to get Richard Strauss and Manuel De Falla but they were too old or too busy.’ Take your pick. Bartók may have been asked too; I am not entirely sure whether that were the case. Nevertheless, he would be present in this concert, with an undeniable masterpiece of exile, his Concerto for Orchestra. 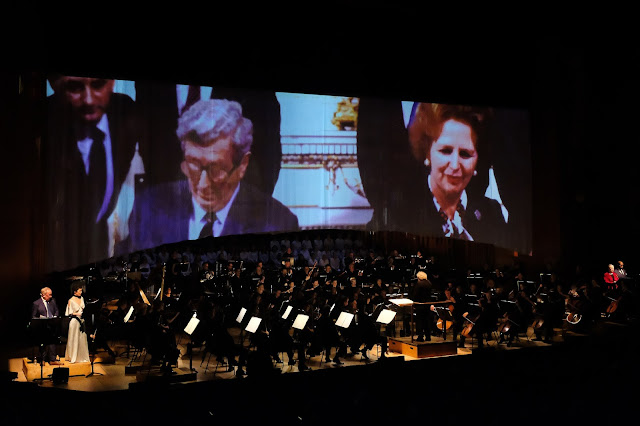 Positioning himself inevitably as an heir to Haydn and his ‘Representation of Chaos’ from The Creation, Schoenberg presents order even within Chaos, the twelve-note series generating a remarkable fugue, perhaps the ultimate, neo-Bachian instantiation of order. It is, perhaps, a premonition or even reminiscence of the gigantic Choral Symphony he had once planned, of which a completed Jakobsleiter would have been but one section. Here it was prefaced and accompanied – as was all the music – by images and, in some cases, sounds too. ‘I would invite you to think we’re in the great age of radio,’ Rattle had said. If it helped as a way in, then I have no problem with that; I was not always quite sure what they added, being quite unsure later on when a superfluity of images of Margaret Thatcher came to the fore. At least we were saved Theresa May and Donald Trump. What struck me in the performance of the Schoenberg Prelude was how close some of the lines and their harmonies sounded – not always the case in this piece – to the ‘freely atonal’ Schoenberg, to Erwartung, to the Five Orchestral Pieces. Constructivism takes strange paths sometimes; with Schoenberg, freedom and determinism are certainly two sides to the same coin, but never straightforwardly, always dialectically.

The remaining five pieces all contain Biblical narration. Again, although it did no harm, and sometimes led to interesting effects – with more than one narrator speaking at once – I was not entirely sure why we had four narrators. They nevertheless grounded this often highly contrasted – in aesthetic quality, as well as style – music; as, in their way, did the projections. The skill with which Shilkret’s own Creation music emerges from Schoenberg’s is laudable indeed, even if intrinsic musical interest is not maintained. (One might well argue that that is hardly the point.) Tansman’s contribution brings a more Gallic sound to the story of Adam and Eve, whereas Milhaud actually sounds more conventionally Hollywood – certainly on this occasion, the LSO’s long experience with film music very clear – for Cain and Abel. Castelnuovo-Tedesco’s Flood music does not seem to me to add anything more than generic background – and not always appropriately generic – but again, it was played with filmic relish, well steered by helmsman Rattle. Toch’s Rainbow music speaks of greater compositional individuality, even though it veers between ‘late Romanticism’ and something closer to Shostakovich. Its lively counterpoint proved quite a joy, as did that of Stravinsky’s Babel, whose proximity to the Symphony in Three Movements, for instance, was clear in this performance. No, this is not a masterpiece; how could it be? But it is of great interest, and was royally served by Rattle and the LSO. If I were left in no doubt that Schoenberg’s contribution is by far the greatest, I can happily live with that. 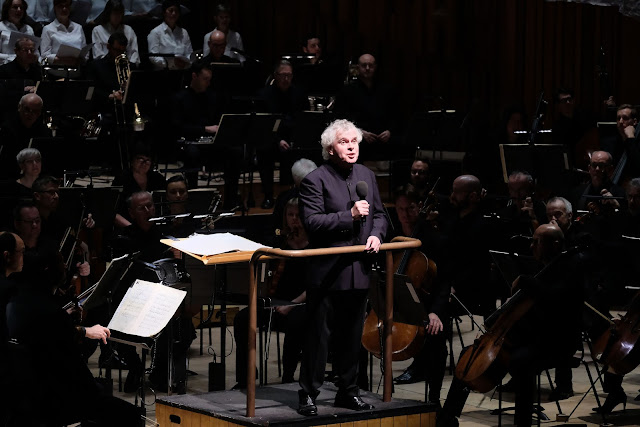 And so to Bartók. In the last Berlin Philharmonic – Rattle’s ‘other’ orchestra – concert I heard during my months in exile, Iván Fischer led the orchestra in Bartók and Mendelssohn. This LSO performance of the Concerto for Orchestra was in all respects the more interesting – at least to me. Introduced by a reading from a late letter from the composer to Bartók to Joseph Szigeti, in which Bartók mentioned a peasant curse ‘may you have nine wives’, the performance seemed, more tragically than ironically, to return, surprisingly yet convincingly, to the world of Bluebeard’s Castle (which I heard Rattle conduct in Berlin last year too). Rarely can the opening music of the ‘Introduzione’ have sounded eerier; it seemed almost to ‘speak’ operatically, as if it were wordless accompagnato. The LSO’s highly wrought, ultra-dramatic way with the music not only surprised, but truly enlightened, enriching my understanding of the possibilities of a work I had thought I knew well. Mahler rarely sounded far away, to considerable, deeply moving effect. Perhaps this is fanciful, but I am convinced that Rattle was determined to bring to this particular performance a sense of the longing and bitterness of exile; if so, he certainly succeeded. Moreover, I was alerted more strongly than usual to the importance of orchestral choirs in this movement; no more than in Schoenberg were mood and drama purchased at the expense of constructivism

The game of pairs in the second movement was similarly relished, in a performance both loving and mordant. Again, even without the images of upstate New York above the stage, it was well-nigh impossible not to think of Bartók as exile, with all the richness of experience that implies. I loved the way the music danced, yet never danced too easily. There is ‘foreignness’ to this music, whatever standpoint or guise one adopts. The darkness of the central elegy seemed, rightly, to take its leave once again from Bluebeard and indeed from the first movement itself. If the material were very different, an emotional closeness to Mahler was again to be heard, as indeed it was in the ‘Intermezzo interrotto’, which intriguingly took upon itself, in context, a function not entirely dissimilar to that of the ‘Adagietto’ in Mahler’s Fifth Symphony. There was longing, yes, but also a sense that we might be about to turn the corner, even that we had. That the music remained ultimately enigmatic was not the least of this performance’s virtues. Without wishing to push the Mahlerian parallel beyond endurance, there was again a sense not only of resolution but of difficulty in resolution to the finale that recalled its counterpart in the Fifth Symphony. Anger and fury remained behind the notes, perhaps more strongly than I can recall ever having heard before. This was no ‘mere’ exhilaration. Bartók’s music had been made strange once again, even re-exiled, in the very best of ways.