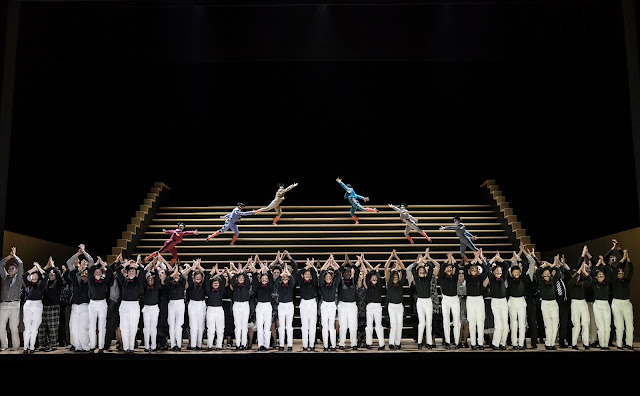 At least Francesca Zambello and her donkey are gone. The Royal Opera’s previous production of Carmen worked in its way – not entirely unlike Meyerbeer at less than his best – yet it offered neither ambition nor insight; indeed, it appeared not even to try. Barrie Kosky rarely lacks ambition; insight is often more hit or miss, though. Kosky is a frustratingly inconsistent director: he is capable of outstanding work and something not far from its opposite. This Carmen is neither. First seen in Frankfurt in 2016, it offers an apparently arbitrary mixture of abstract grand opéra – surely the Intendant of Berlin’s Komische Oper should have a little more respect for, or at least understanding of opéra comique – and the irritating silliness of ‘look at us’ variety show routines. A few visually arresting moments, courtesy of Katrin Lea Tag’s designs, notwithstanding, it amounts to substantially less than the sum of its parts, not least on account of its perverse apparent lack of interest in characterisation.

I am not at all opposed to the idea of something adventurous being done with, even to, Carmen. It will always survive. Dmitri Tcherniakov’s recent, superlative Aix staging showed what can be done with a fundamental rethinking of the work. Not the least of its interesting insights was how, if we decentre Carmen, look at the action, in this case already very much in the realm of metatheatre, from the standpoint of, say, Don José, Carmen might actually become a far more interesting character. Kosky seems at times to inch towards the metatheatrical. ‘Don’t we all?’ one might well ask. However, it is only, ultimately, with the insight, if one can call it that, that Carmen is a show, all singing, all dancing – except when, occasionally, it is not. And so, the steps, certainly a fine edifice in themselves, and suggestive both of an amphitheatre and a bullring – are they not often the same thing in any case? – offer a way for the action to look at us, and for the characters not to look at each other. That is pretty much it, though. The loss, moreover, in never really knowing who anyone is – or rather knowing, but not on account of anything the production is showing or suggesting – is great. One can imagine the pseudish Christof Loy doing something like this; indeed, he did in his dreadful Lulu. Kosky is capable of much better than that, though. 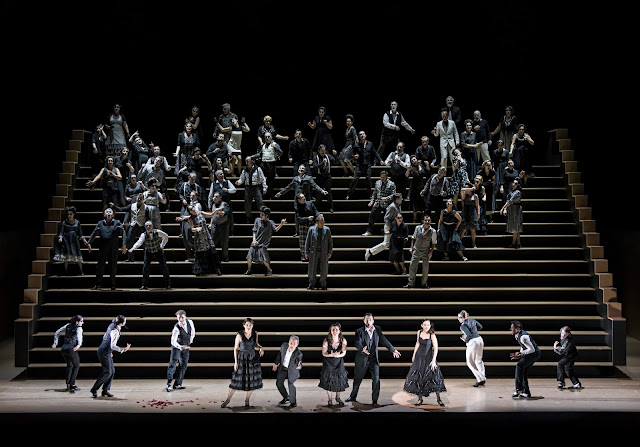 The lack of realism – as an æsthetic: I am certainly not insisting that one ‘must’ see a romanticised Seville – inevitably hampers the musical performances too. In this weird abstraction, especially when punctuated by lengthy, breathy, soft-porn-style readings from the ‘Voice of Carmen’, over loudspeakers, we lose sight, aural sight too, of connections in the score as much as on stage. Again, it is not that I have a problem in principle with attempting an alternative to the dialogue, ‘edited by Barrie Kosky’ or not. However, the loss of a true sense, whether ‘then’ or ‘now’, of opéra comique, is not compensated for by any other gain. Further misguided performing choices, ‘after the critical edition by Michael Rot, adapted by Constantinos Carydis for Frankfurt Opera, 2016)’, conspire to the general ‘effect without cause’ of making heavy weather indeed out of so ‘Mediterranean’ a work. 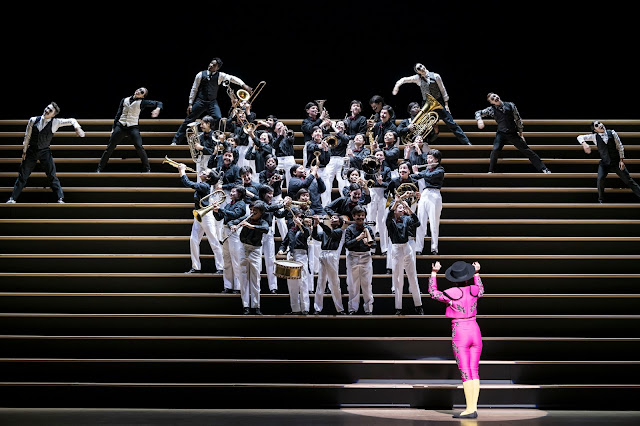 I have never heard a poor performance from Jakub Hrůsá, a conductor I admire greatly. Here he certainly proved suggestive, in an admirably anti-Nietzschean way, of a ‘symphonic’ Carmen, Beethoven and even Wagner often coming to mind. Whether that really might be what Carmen needs, let us leave on one side; I had my doubts, but there are possibilities here worth exploring. In this context, however, it seemed more another confusing strand. Whilst Hrůsá often drew fine playing from the orchestra, in terms of colour, precision, even harmonic motion, there were perhaps a few too many slips, not least from the brass. Likewise, whilst choral singing was generally good, there were also passages in which stage and pit fell noticeably, disconcertingly out of sync. Such problems I can well imagine being ironed out in subsequent performances.


Anna Goryachova sang well enough in the title role, with clean command of line. I could often make little sense of her French, however, without the titles. Moreover, I had the strong sense she would have made more of an impression, if not in a smaller theatre, then at least in a more intimate production. The same could be said of most of the cast: hardly their fault. Francesco Meli’s all-purpose Italianate style had its moments, and in some senses might have been better suited to the staging. One surely wants something a little more idiomatic for Don José, though, and surely less coarse on top. Kristina Mkhitaryan’s Micaëla sounded curiously undifferentiated from Carmen, but again that was not necessarily the fault of either singer. The production offered her little opportunity to show who she was, but again she sang well enough. Quite why Escamillo was turned into a figure of mere camp is anyone’s guess; Kostas Smoriginas did what he could in the circumstances, and yes, you have guess it, did that well enough. Indeed, there were no causes for complaint amongst any of the cast. Ultimately, however, for all the production’s increasingly attempts, somehow both desperate and smug, to ‘entertain’, proceedings quickly became more tedious than anything else. That is an achievement of sorts for Carmen, but a sad one. Carmen’s shrug at the end – it had all been just a very protracted game – said it all really.