The title of the concert series is perhaps slightly misleading: ‘Voices of Revolution, Russia 1917’. It is perhaps also slightly belated, although one might argue that we are now living in the year following the centenary date itself of the October Revolution. No matter, as Martin Sixsmith, former BBC correspondent in Moscow and series advisor, explains, the intention is to explore ‘works by composers who had very different reactions to the Bolshevik Revolution of autumn 1917, with a selection of music that revolves around themes of idealism, propaganda and repression.’ Moreover, as Sixsmith and Marina Frolova-Walker proceeded, in an enlightening pre-concert talk, to discuss, the three composers on offer here certainly acted very differently in that respect:  Alexander Mosolov an archetypal figure of early Soviet modernism, Prokofiev an exile who eventually returned, and Reinhold Glière a purveyor of dubious ‘socialist realism’.


Glière simply wanted instructions from whomever was in charge so that he could get on with his (hack) work. As Frolova-Walker explained in the programme: “‘just tell us what to do”, … he said at one official meeting.’ When no ‘formalists’ were available for consideration, he passed the Zhdanov test and won the 1948 Stalin Prize, as he would again in 1950. He had also done so in 1946, for his 1943 Concerto for coloratura soprano, which struck me as rather more than hack work. Indeed, the conception itself, whilst not entirely original, remained unusual, even if the neo-Romantic language did not. Nadezhda Gulitskaya, a late substitution for Ailish Tynan, proved fully up to its demands, contributing more than a little glamour as well as necessary precision of a pitch to a work whose undeniable charms might otherwise have palled, however excellent the contribution of the Philharmonia Orchestra under Vladimir Ashkenazy (conductor of all four Philharmonia concerts). Let us be kind and say that the opening phrase merely displays a strong resemblance to a theme from Die Walküre (think of Brünnhilde’s ‘War es so schmählich’); there are only so many notes in the major scale, and there are in any case worse models for a melody than Wagner. The music proceeds somewhat in television-score-ish fashion, save for the imaginative vocalise, and certain moments beyond: for instance the soprano’s duetting with clarinet. The second of the two movements, a neo-Tchaikovskian waltz, seemed a bit odder, but it was a welcome opportunity nevertheless to hear a work hardly overburdened with performances.


The Red Poppy, even in its suite version, is likely – I hope – to remain more of a rarity. Almost socialist realism avant la lettre, or at least long before its necessity, it was apparently the first Soviet ballet on a properly contemporary socialist realist theme: an imperialist one at that, Russian sailors venturing ashore to rescue victims of nationalist China’s capitalism. Bizarrely, and perhaps still more disturbingly, the United States later took it up, following the alliance between Roosevelt and Stalin, exchanging American sailors for Russians, and Japanese victims (of something else, I presume) for Chinese. It begins colourfully, cartoon-like, clearly being relished on at least one level by players and conductor alike. Yes, I suppose one would expect pentatonic writing – but really, it here soon extends here beyond a harmless joke. ‘I’m not racist, but…’ Glière was nothing if not eclectic – reactionary eclectic, though – and a bad Johann Strauss waltz entered to provide ‘balance’. It was all gorgeously played, solos as well as full orchestra, as I suppose they should be. The Naxos performance below is harder-edged, rather to the music's - and our - benefit, I think. This was fascinating to hear, once; but I cannot, even without its highly problematic Orientalism, imagine wanting to repeat the experience in a hurry. 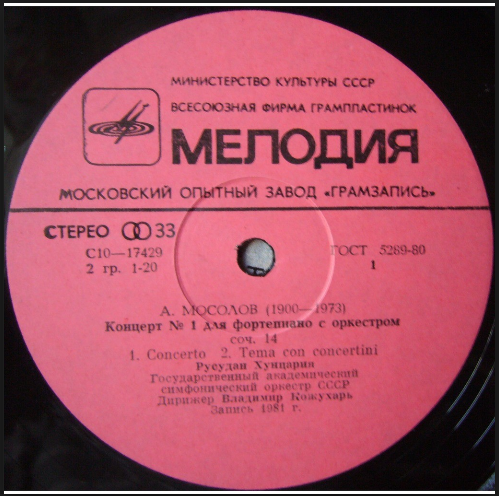 Mosolov’s Iron Foundry is, of course, well known – if relatively little heard in concert – as a signal-bearer for Soviet musical modernism. The Philharmonia’s performance under Ashkenazy was every inch the match for the Glière items. For me, at least, the music, as well as the politics, are – and, in performance were – far more compelling. Riccardo Chailly once recorded it alongside (more) acknowledged works of international modernism, Prokofiev’s Third Symphony and Varèse’s Arcana. Here one could certainly here why. I thought also of the former’s Pas d’acier, the irony being of course that such high water-marks of Prokofiev’s own modernism were decidedly non-Soviet works. The size of the orchestra struck one visually, its volume aurally. Here was a factory of an in music, a worthy successor – indeed, a superior work, I think – to Honegger’s Pacific 231, replete, to quote Frolova-Walker, ‘with a kind of heroic “hymn to labour” in the horns’. Tremendous stuff!


So too is and, once again, in performance was, Prokofiev’s Third Piano Concerto, in C major – not in F major, as claimed in the programme leaflet handed out on the day. It is the most Classically proportioned of Prokofiev’s five essays in the genre, with three movements of more or less equal length, but in this performance as well as in this context, its relation to its own time sounded more than typically apparent. Bezhod Abduraimov’s pounding of the piano – and Ashkenazy’s of the orchestra too – reminded one just how radical Prokofiev’s percussive treatment of the instrument can, and most likely should, seem. Bartók is not the only pioneer in this respect. But Parisian neo-Classicism welcomed the work with open arms too; the C major ‘whiteness’ of the close also came strongly to the fore, alongside magical, silvery premonitions of Cinderella. That said, the finale’s status as complement to the first movement was also clear in retrospect. That first movement sounded as if taken at a relatively swift tempo: no bad thing. However, I am not sure that it actually was; the feeling was at least as much a matter of energy from soloist, orchestra, and conductor (who, of course, played the piece more than a few times himself). The central theme and variations proceeded briskly, again not too briskly, and again emerged all the stronger for it, rhythms nicely sprung: the basis, so it seemed, for much of the melody and harmony with which they worked. Its darker, almost cinematic, side was not neglected: again, I thought, an instance of ‘period’ interest in a strong rather than antiquarian sense. Shadows of Scriabin still registered too, in a truly brilliant performance. I hope to hear more from Abduraimov, even if his Schubert encore sounded closer, intriguingly so, to Prokofiev than to the ‘source’.