Aspects of Liszt: Arranger and Arranged, Proselytiser and Performer

(This essay was originally published in a 2018 Salzburg Festival programme for a recital by Igor Levit.)

Inventor of the piano recital

The piano recital is a more recent phenomenon than many might suspect. After all, the tradition of Western art music boasts several centuries’ worth of dedicated solo keyboard music from which the modern pianist may draw in devising programmes for performance. However, if modern concert life extends back to at least the seventeenth century – much depends on what one means by the term – the idea of a keyboard player giving a public concert of devoted to music of his or her instrument is very much of the age after Beethoven. Indeed, not only is it of Liszt’s age; it may reasonably be considered his invention: both the term, or rather the particular usage, and the event.

Private performance had hitherto been considered the better arena for display of an instrumentalist’s technique, certainly for his or her musicality. Public benefit concerts involving a variety of performers, vocal and non-vocal, had offered a mixture of genres, often with a strong emphasis on opera (instrumental fantasias as well as excerpted arias). Appear with the renowned soprano, Mme X, and you might be offered a well-paid appointment to teach Mlle Y piano. Beethoven’s demanding music was not an obvious option; it most likely would be, however, in recital programmes from the later nineteenth century. That development is difficult to imagine without the example of Liszt and the piano ‘recital’, the first event advertised as such being his appearance at London’s Hanover Square Rooms in 1840. Soon virtuosi the length and breadth of Europe and beyond would follow suit, albeit in programmes whose musical and technical demands were not always granted equal weight, as increasingly (if not always) they would with Liszt.

Liszt’s operatic transcriptions, paraphrases, and fantasias varied greatly; it is doubtless beside the point to separate their functions entirely. Even the most outlandish vehicles for virtuoso display were not necessarily without musical value, nor without missionary intent as calling card for composers ranging from Donizetti to Wagner. Nevertheless, with Wagner – Liszt’s close friend, musico-revolutionary comrade-in-arms, eventually son-in-law too – there was always a greater seriousness to the musical treatment and a greater imperative to proselytise. Given the paucity of opportunities to hear Wagner’s dramas – Liszt also conducted the 1850 Weimar premiere of Lohengrin, whilst Wagner languished in Zurich exile – Liszt’s work helped spread the word. By the time that Liszt wrote his final such piece, not only for Wagner but for any other composer, the sole intent was to honour the composer who freely admitted to having borrowed a theme from Liszt’s own Excelsior! for his own Parsifal. Musical interrelationships between the two composers are far more complex, far more interesting than partisans of either will allow, or even know.

The ‘Solemn March to the Holy Grail’ may be understood as a written-down example of the instances at Wagner’s Villa Wahnfried when Liszt, having long since given up recital appearances, would regale guests with excerpts or impressions from the score of Wagner’s final drama. It is not a transcription as such; it corresponds to no one section; it is a self-standing work, albeit strongly tied to music in which, to the tolling of Monsalvat’s bells, knights approach the Grail. Perhaps we might think of it and many of Liszt’s Wagner pieces as symphonic poems for piano. It never rejects conventional tonality, yet its tonal ambiguities, both Liszt’s and Wagner’s, remind us that, in some cases, Liszt already had – and composers such as Debussy and Schoenberg very soon would. Even as the trudging bass line grounds the operatic scenes unfolding and referred to above, both threaten to dissolve and dissociate. What, then, to make of the repeated figure from the Voice from Above, ‘Enlightened through compassion, the pure fool’? Its enigma is not lessened by loss of the words.

Liszt as organist, brought home to the piano by Busoni

Liszt’s contribution to nineteenth-century organ repertoire and performance may be on a smaller scale than that for the piano, yet it is no less significant for the instrument. There is, moreover, nothing small-scale about the Fantasy and Fugue on the Chorale ‘Ad nos, ad salutarem undam’ from Giacomo Meyerbeer’s opera, Le Prophète. Much of Liszt’s organ music is transcription or paraphrase; this, however, is a thirty-minute-long original work, taking Meyerbeer’s chorale as its theme. Not entirely unlike that Parsifal Voice from Above – Wagner, in general hostile, would occasionally acknowledge his debt to Meyerbeer – the chorale is heard ‘angelically’ high, in Liszt’s traditional ‘divine’ key of F-sharp major. The first of the work’s three sections resembles a first-class organist’s improvisation. For all its structural integrity, it retains a sense that anything, melodically, tonally, virtuosically, might happen. A central, developmental Andante, notably also in that ‘divine key’ of F-sharp, speaks of a love in the line of Goethe’s ‘eternal feminine’, soon to be explored further in Liszt’s own Faust Symphony. Even when, particularly when, Liszt prays, the chastity of Wagner’s dying community of Monsalvat could not be more foreign to him. There is something Mephistophelian to the final, fugal section, not least in the ‘negation’ of the chorale theme into a more angular subject for the fugue. As so often with Liszt, the structure permits of multiple readings: formal, literary, theological, and more. 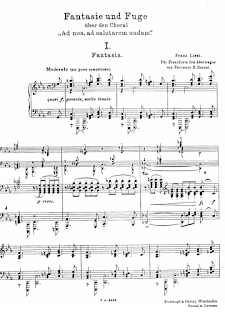 It was left to Ferruccio Busoni to transcribe the work for piano – and thus, perhaps, to come close to out-virtuoso-ing Liszt himself, albeit in Liszt’s serious, proselytising mode. Many have thought Busoni’s faithful, far from pedantic, version superior to Liszt’s original, returning the music to the instrument Liszt knew best of all. Whatever the truth of that – with Liszt, there is rarely good reason to choose – the relative clarity of the concert hall offers a fine alternative to the echoing, Gothic grandeur of the church.


Pianist of the future

Writing to his publisher, Artaria, Beethoven suggested that his new sonata might become performable in fifty years’ time: music, no doubt, to its commercial ears. In his late music, we encounter, probably for the first time in the tradition of art music, yet certainly not for the last, a composer explicitly writing for posterity. It was an example Liszt would follow, in those tonally ambiguous – occasionally even atonal – late piano works, actively discouraging his pupils from performing them, lest they damage their careers. His younger self, moreover, had given, in 1835, perhaps the first public performance – again it depends precisely what one means here, and our knowledge here is limited – anywhere and almost certainly in Paris, of a work hitherto considered unperformable and incomprehensible.

In his review, Berlioz extolled Liszt’s efforts, seemingly fully achieved, to present what we might now call a ‘definitive’ performance. Liszt was a new Oedipus, the notoriously difficult-to-impress composer-critic wrote. He had solved the ‘riddle of the sphinx’. Liszt had ‘explained’ (note the interpretative claim that it does not necessarily speak for itself) ‘the work in such a way that, had the composer himself had returned from the grave, joy and pride would have swept over him. Not a note was left out, not one added … no tempo change was made that was not indicated in the text.’ It is not clear whether Berlioz refers there to Beethoven’s metronome markings; therein lies a musicological hornet’s nest I shall leave undisturbed for now. Liszt had shown himself to be ‘the pianist of the future’.


Beethoven’s 1818 Sonata in B-flat major, written after a fallow year for the composer, will always remain explosive ‘music of the future’. Pierre Boulez, a great admirer of Beethoven, Liszt, and Wagner, felt a reckoning necessary, to attempt its deconstruction, in his own Second Piano Sonata; later, he claimed that Beethoven’s late music would always remain an intellectual challenge. Written ‘for’ an instrument, a Hammerklavier, most likely incapable of rising to its challenge – Beethoven had been completely deaf since 1816 – the sonata defies all attempts at its taming. Its scale forms part of our experience of the work; yet the three quarters of an hour, give or take, over which it extends are the frame rather than the painting itself. Innumerable technical challenges notwithstanding, the most extreme difficulties of all remain musical rather than technical. 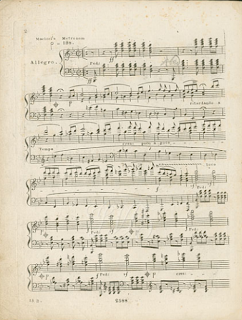 In practice, the two are inseparable. Try playing the opening, left-hand upbeat to the B-flat major chords; it is far more difficult than it might seem, without cheating and using the right hand. And yet, the dynamic propulsion unleashed is crucial to the forging of a performative unity both there and not there in the work ‘itself’. Perhaps the falling interval of a third is integral to the work; a performance will most likely render it such. For dialectical contrasts, in the opening sonata form movement, ‘traditional’ and yet anything but, are the dramatic material of possibility and impossibility. The commanding assertion of the opening theme, fanfare-like is balanced, called into question, and corroded by the lyrical, almost melting response. Forte and piano, harmony and counterpoint, major and minor, B-flat major and B minor (a ‘black key’, Beethoven once described it, playing a crucial role in every movement): these and countless other forces, both complementary and opposing, propel the musical drama.

In the scherzo, Beethoven offers what William Kinderman describes as ‘a humorous yet dark parody of the opening Allegro’. Mahler surely took note here. Its trio, once again rich in imitative writing, takes one of the ‘traditional’ tonal options, the tonic minor, carried through into the ‘Presto’ section, prior to a varied – always developing – da capo for the scherzo and coda. The Adagio sostenuto, Beethoven’s longest slow movement, is written in endlessly developing sonata form – the recapitulation essentially a second development – in the distant, rare key of F-sharp minor. The radicalism of still later works, the tiny piano Bagatelles and the great Missa solemnis alike, seems prefigured here: we seem to have reached a final frontier: a challenge surely to the young, serialist Boulez.

The finale’s opening, likewise the reappearances of that material, sounds almost as if from the world of late Liszt, whilst at the same time clearly emerging from the transition between the two movements. Trills – on the angels’ side, or the Devil’s? – strike the fear of God into performer and listener alike. Moments in which an almost neo-Gluckian ‘noble simplicity’ reasserts itself sound all the more shocking – and necessary. All the way, the array of contrapuntal procedures to which Beethoven subjects his material continue not to satisfy, as they might in Bach, but to bring the music to the edge of dissolution. A great performance will reveal the music no longer, perhaps, as unperformable, but as impossible. It will do that, as presumably Liszt once did, even as it hurtles before our ears.