The Paris Opéra celebrates its 350th anniversary this year. Its archives preserve its founding document, the twelve-year privilege or monopoly granted by Louis XIV, ‘par la Grâce de Dieu, Roy de France et de Navarre,’ to the poet Pierre Perrin, to found anywhere in France, with whichever business partners he might choose, academies of opera. This ‘Privilège accordé au Sieur Perrin pour l'établissement d'une Académie d'Opéra en Musique et en Vers François’ was renewed up until the Revolution for Perrin’s successors, Perrin himself having been imprisoned just three years later and compelled to cede his privilege to Lully. The curtain at the much later Palais Garnier, as luxurious as anything one might imagine from St-Germain-en-Laye, or indeed Versailles thereafter, reminded us of that founding year: 1669. It is perhaps a fiction in some ways, since the first performance would not be given until 1671, but then such is the way with myths of creation. 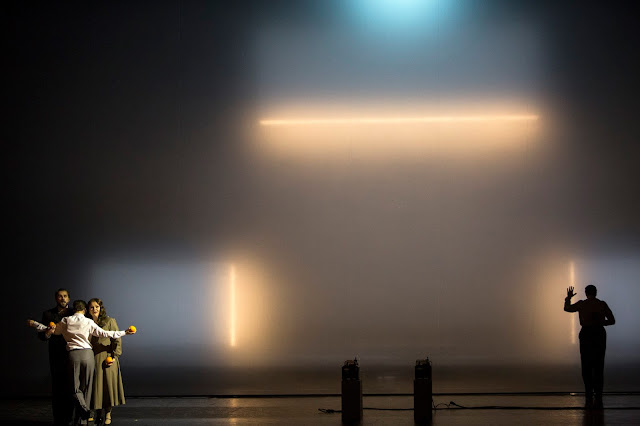 Which brings us to our very own myth of Creation – or rather its aftermath: arguably the aftermath of its aftermath, following the expulsion of Adam and Eve from Eden. We come, then in Christian genealogy, to the first murder, Il primo omicidio; or, to give it an ‘or’ perhaps more crucial than we find say, in the full titles of Figaro or Tannhäuser, Il primo omicidio, ovvero Caino. Every time we start, or start again, we qualify. Myths and their accretions are like that, whatever their deceptive simplicity. Such, at least, was one of many thoughts provoked by Romeo Castellucci’s staging of Alessandro Scarlatti’s 1707 Venetian oratorio, which, if not dating back quite to Perrin or indeed to Lully, stands considerably closer to them than to us – not entirely not unlike Cain and Abel to us as opposed to Creation itself.


Design tends to be an especially crucial element of Castellucci’s theatre: that is, not only of the expression of an idea, but perhaps as an idea or instead of an idea in itself. This staging is a typically painterly, or at least visual, creation, especially in the First Part; there is something of the installation to it, not at all inappropriately, given that an oratorio is not ‘supposed’ (‘sacred’ music’s forbidden fruit?) to be staged in any case. As in Castellucci’s Moses und Aron, which inaugurated Stéphane Lissner’s intendancy in Paris, and which surely acts as something – Biblical chronology here fruitfully entangled – of a progenitor to the present staging, much of the initial action, such as it is, is viewed through gauze or at least the effect thereof. This is pre-history, after all, or rather myth. Is that not often how we strain, or indeed even indulge? The remoteness has temptations as well as snares of its own; are temptations and snares not the same thing? Were they not for Eve – and for Cain? 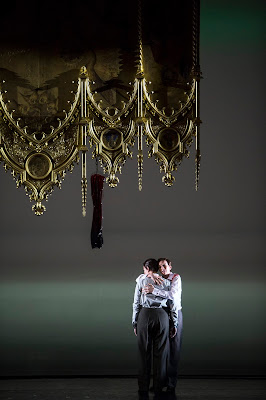 The visual drama of blood sacrifice, again as in Moses, to whom some credit writing of the Pentateuch, may again be thought of as painterly, or at least akin to painting. An altarpiece suspended, upside down, reminds us where we are heading as well as where we are. Use of colour and fluid may well be familiar from other Castellucci stagings, but it is not straightforwardly to be reduced to a tic, even though our word ‘aesthetic’ contains the charge. Coincidence does not equate to genealogy: in a Christian or post-Christian tradition, the two can hardly stand further apart. Perhaps I failed to appreciate that in Castellucci’s Tannhäuser, which in general left me unimpressed; if the opportunity presents itself to give it another go, I shall try to take it.

Representation in the Second Part seems less distant; we see more clearly in the run up to Cain’s murder of his brother. However, then, or rather just before, an interesting doubling occurs. Each of the ‘characters’, including the ‘Voices’ of God and Lucifer, acquires a further visual representation from a child actor. We retain clarity but we see double without hearing double. What does that mean? The question is open; it can probably mean whatever you want it to mean – or not. For me, however, there are two principal points, one relating to the issue of representation itself – as in Moses, of course, but also as in the genre of oratorio, always hedging on the edge of representation and in this particular performance actually submitting or, if you prefer, acquiring visual liberation. 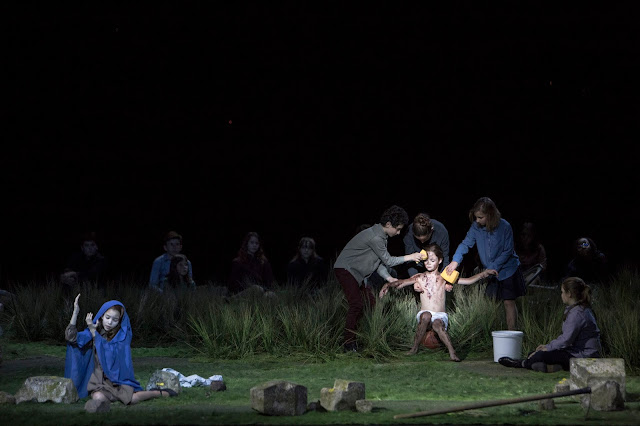 I shall return to that, but first, perhaps less or at least differently conceptual, is the dramatic role of children. This is a foundational myth, albeit with catches. Eve here acts very much as mother: a mother who essentially loses both of her children. She becomes, here explicitly in traditional Marian ultramarine, a forerunner of that other Mother of Sorrows. She is also, of course, mother to the human race. We witness the multiplication of Adam’s seed – but her progeny too. In some traditions, the date of the Feast of the Annunciation, 25 March, is also given to Adam’s Fall. We are also reminded, in one of those catches, that the population of the Earth takes place via neither Cain nor Abel. Such is Cain’s punishment: he is punished to live, as Antonio Ottoboni’s libretto makes repeatedly clear. Is that not our traditional tragic (which is to say, Greek rather than Hebrew) insight: Silenus’s it would be best not to have been born at all, and then better to die than to live? Christianity’s dialectic between Jewish and Hellenic traditions continues.

There is an historical, metatheatrical element to this too, which connects the issue of lineage to that of representation. Scarlatti wrote two operatic tragedies, Il Mitridate Eupatore and Il trionfo della libertà, in that same year, 1707, for Venetian theatres. (We seem not to know where Il primo omicidio was first performed, save for it being in Venice.) We know that Il primo omicidio was performed again, three years later, in 1710, at the Palazzo della Cancelleria, for the Venetian-born Cardinal Pietro Ottoboni, nephew of Pope Alexander VIII and son of Scarlatti’s librettist and employer (as maestro di cappella), Antonio. Such keeping it in the family is intrinsic to our Christian genealogy too. In some cases, interestingly, the children’s gestures here proved more ‘operatic’, as conventionally understood, than those of the singers. Was oratorio once again leading to, even giving birth to, opera, however fraught the chronology? (If one wants fraught chronologies and genealogies, there are worse examples than the story that had begun in 4004 BC.) Oratorio a non orando, as eighteenth-century religious conservatives used to say? Was a performance, let alone a staging, of allegedly prayerful music so called because no one prayed? Interesting, difficult questions were raised concerning the objectification of children too, especially within the dominant patriarchal construct of ‘the family’. 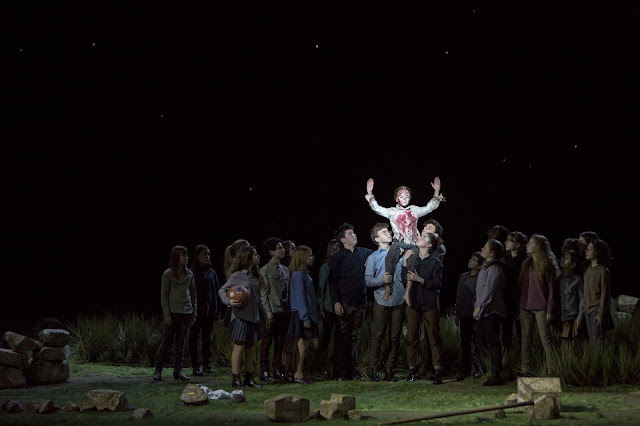 Without wishing to denigrate the considerable virtues of Scarlatti’s score, it perhaps serves most clearly as a setting of Ottoboni’s libretto. That is surely what we heard and indeed saw on this occasion. We shall not get very far if we wish to hear it as if it were Wagner, or Mozart for that matter – by which I mean to refer to aesthetic and dramatic content rather than the restricting, deadening idea of ‘period style’, as foreign a concept to Scarlatti and Ottoboni as might be imagined. It would be dishonest to claim that there were no such restrictions to the present performance. If René Jacobs’s tempi were in general unobjectionable, the instrumentalists of the B’Rock Orchestra too often seemed encouraged to shy away from the operatic opening-up we witnessed on stage. The strings were not, mercifully, entirely without vibrato, but a little more Venetian and/or Roman colour would not have gone amiss. Likewise with the estimable vocal performances, which sometimes one wished might take a little cue from the enthusiasm of the doubling child actors. That said, there were no disappointments and there was much to savour, not least from the maternal sincerity of Birgitte Christensen’s Eva, the haunting innocence of Olivia Vermuelen’s Abele, and the otherworldly purity of Benno Schachtner’s countertenor as the Voice of God. 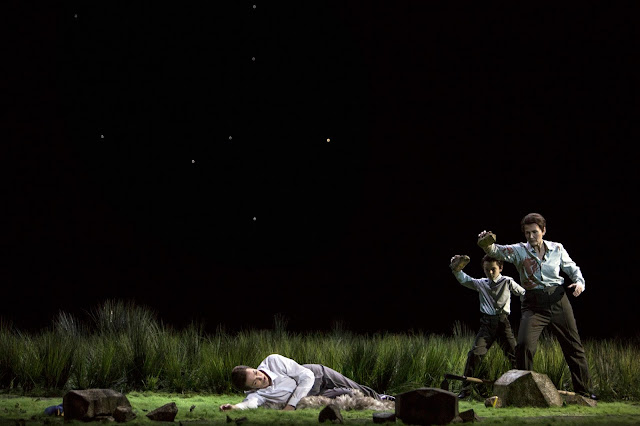 Jacobs reminds us in a programme interview that we had to wait centuries to hear Monteverdi’s Vespers once again. The comparison seems extravagant; I do not know Scarlatti’s other oratorios, so perhaps they do reach so exalted a level; if so, we should hear them as soon as possible. For me, this oratorio comes nowhere near. But it is of interest; it is worth hearing, worth thinking about. The conductor, moreover, is right to act as chief advocate for the defence. With a work such as this, that is what he is there for. Jacobs led a perfectly reasonable account, not least given the straitjacket of ‘period’ instruments and, more broadly, approaches. Imagine, though, what might have been revealed, had such extravagance of advocacy been lent also to the performance itself. Creation and its aftermath will always stand in need of recreation.