Hand on heart, I have never seen anything quite like this. From curtain rise to reveal a dog running across stage—accompanied by palpable audience bewilderment and highly audible laughter—to a bizarrely offensive final act seemingly co-directed by David McVicar and ‘Mad’ Melanie Phillips, film director Damián Szifron’s first foray into opera afforded the very definition of a car-crash. Much as one may have wished to avert one’s eyes, such was alas never an option. There was, to be fair, unwitting entertainment along the way. Yet seeing—and hearing—outstanding artists such as Elina Garanča, Brandon Jovanovich, and Michael Volle wading and occasionally, Dagon help us, dancing through the non-ironic polystyrene debris of a scenic cross between Cecil B De Mille, Franco Zeffirelli, mid-budget 70s science fiction, and the day’s nth Spectator columnist endorsement of Boris Johnson, was ultimately the stuff of nightmares—or at least of end-of-term revues. 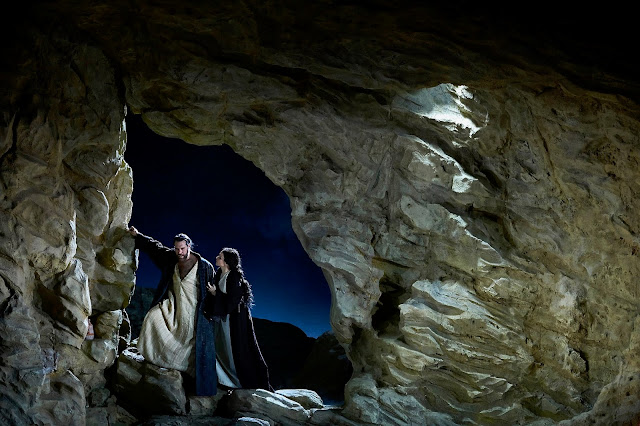 Let us start with the good, musical news. All three of those soloists were on fine musical form. I have never heard anything other than an excellent performance from Jovanovich; this was to be no exception. Tireless, committed to words and music, heroism and humanity, in equal measure, his Samson could hardly be bettered. That neither he nor Garanča could be visually recognised beneath their extraordinary costumes was doubtless no bad thing for either. Garanča brought all the virtues one might have expected to her Dalila: similar precision and professionalism, with a mezzo as rich as it was even of tone. Volle, to whom my heart especially went out when in a ‘religious’ bathrobe, proved vocally intelligent and inviting as ever. Save for unfortunate appearances from Kwangchul Youn and Wolfgang Schöne, the rest of the cast, chorus included also impressed. The latter’s slightly rocky start did not preclude performances of welcome heft and dramatic direction.

At least as impressive as the central trio were Daniel Barenboim and the Staatskapelle Berlin. The promise held out by their all-Saint Saëns subscription concert a couple of weeks earlier was fulfilled in a performance suggesting, however great the illusion, this to be music they played almost as regularly as Wagner. (To be fair, Barenboim has a recording of the opera to his name, but even so.) As ever with Barenboim’s performances, it was founded upon harmony, making fine sense of Saint-Saëns’s medium- and longer-term tonal plans, yet without sacrifice to detail. Not for the first time, his handling of neo-Bachian elements had one long for him to conduct more of the real thing one day. If the opera’s conclusion remains strangely perfunctory and the preceding Bacchanale problematic in its orientalism, there is little that can be done about that. An array of gorgeous orchestral playing, transparent and weighty as required—not infrequently, both—offered more than ample compensation for shortcomings in the score. At least, it would have done, had it not been for the unfolding catastrophe on stage. 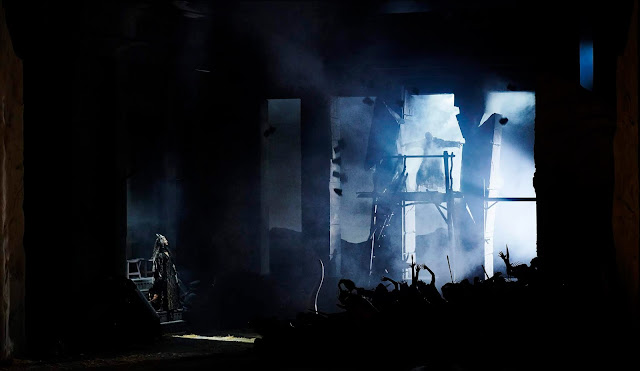 Dear reader, it is to the tale—or tail—initiated by that mysterious, never-to-be-seen live stage hound, lodged indelibly in the visual memory, that we must return. Poor Rover, we knew him all too little, yet he deserved our gratitude for running across the stage—not unlike the equally mysterious ENO nude lady of yore, presumably awarded a block booking—and thus briefly distracting us from Étienne Pluss’s still more risible ‘Biblical’ landscape. It matched, I suppose, Gesine Völlm’s ‘Biblical’ costumeswere one in the market for a Life of Brian sequel without the (intentional) jokes. And it provided a space—someone had to—for breathtakingly amateurish blocking and choreography. Such was leavened-or, according to that rarest of commodities here, taste, further depressed—by hapless acts such as having Samson appear on stage dragging, with mixed success, a slaughtered bull, from which he would extract a horn to gorge a few passing Philistines.

A ballet scene, in which Samson and Dalila doubles danced their inexplicable desires, Dalila at one point wandering offstage to emerge with child—cue, yes, much rubbing of her ovular miracle—was bewilderingly accompanied by a sun/moon that moved ever so fitfully in various directions. A technical hitch, perhaps? More likely trying to escape this cosmos from embarrassment. And so it went on, not so much as an idea, let alone a Konzept, in sight. Dalilla’s cave, seemingly located on a stage simplification of a set for a spin-off from Peter Davison-era Dr Who, offered a location for what, in this ‘aesthetic’, we should probably call ‘lovemaking’. That was certainly, in the pejorative sense, what it looked like; thank goodness it was cut short; one could sympathise with Philistine desire to arrest at least one of its participant.