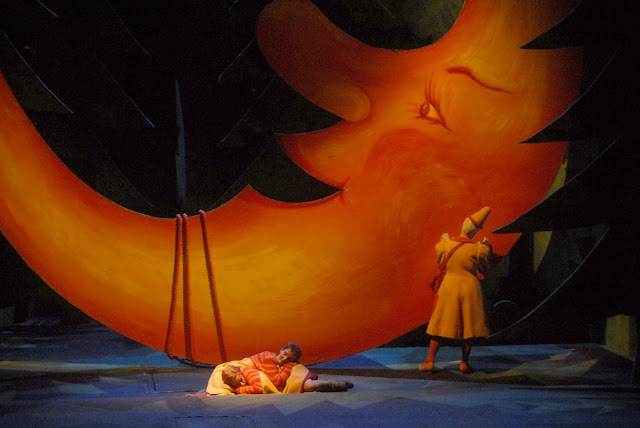 A lovely way to open my operatic year: a new—to me—production of an opera of which I never tire, Humperdinck’s Hänsel und Gretel. Andreas Homoki’s Deutsche Oper production was first seen in 1997 and has clearly done sterling service for a mixed audience of children and adults. (There are matinee performances intended more specifically for families, but there were plenty of well-behaved—often far more so than the adults—children on the evening I attended.) There are clearly limits to what will be thought of as appropriate for such a production. In no sense does Homoki’s team, including revival director, Silke Sense, come close to what remains for me the finest exploration of the work’s dark side: Liam Steel’s 2016 Royal College of Music production. But then, that is not what they are trying to do. The story is told directly, without kitschy evasion or indeed kitsch of any variety. It offers an apt sense of wonder, colour—perhaps heat too, at least metaphorically?—increasing from the relatively drab, humdrum house from which the children have started. Clowns offer a hint or two of menace as the creatures of the forest: clowns always do. The witch is clearly a tormented soul as well as tormentor, a point concerning which, like others, one can make what one wishes. Children doubtless will have done: in no sense being condescended to in the recreation of ‘childhood’ many adults, declining to face up to their own anxieties and fears, wish upon their presumed charges. 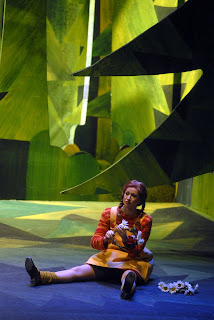 I should have to go back, I think, to Sir Colin Davis at Covent Garden to recall so finely conducted a performance. Donald Runnicles and the Orchestra of the Deutsche Oper did Humperdinck proud not only in presentation but in exploration. Here in the orchestra, one might say, we heard the most fruitful and challenging musical drama. It would be difficult, no impossible, and certainly perverse to play down Humperdinck’s Wagnerisms. Even when they verge on outright plagiarism they do not fail to charm—unlike those of many successors. To hear a performance, however, in which the conductor makes so much of the weblike connection of motifs that one fancies one might be hearing the work of The Master himself is a rare treat indeed. So too is to hear quite how much Humperdinck’s score owes—or can be made to owe—to the yearning of Tristan as to the more obvious candidates, above all to Die Meistersinger. What to make of that? There are psychoanalytical possibilities aplenty, for those willing to take them. Does that not after all penetrate to the heart of what fairy tales have to offer? Speaking of seduction, who could resist the polished tone, dark or golden by turn, of this orchestra at something approaching its best?

Jana Kurucová and Alexandra Hutton made for an engaging central pair: well contrasted and yet also complementary, as adept with stage business as vocal line in construction and development of character. Heidi Melton surely falls into the category of ‘luxury casting’ for their mother, Gertrud, and what a welcome luxury this proved to be, Wagnerian antecedents present for those who wished to consider them, yet perfectly scaled—not necessarily scaled down—and imbued with abundant warmth and humanity. Noel Bouley’s Peter sounded a little out of sorts toward the close, but it was nothing too serious. Andrew Dickinson’s Witch intrigued: no mere caricature, though ultimately an enigma. Flurina Stucki as the Sandman and Dew Fairy, together with the children’s choir and movement choir, all contributed to the evening’s enchantment. Next operatic stop: across town for something rather different, Beat Furrer’s Violetter Schnee.