As with many of Wagner’s ideas, it is all too easy to present, selectively or unwittingly, an assemblage of quotations “proving” a certain line, whereas one might just as readily demonstrate the contrary. Was Wagner “nationalist” or “universalist”? Does he properly belong to “the Right” or to “the Left”? The answer has often been formulated beforehand in essentialist terms, dependent on whether one wishes to convict a monster or absolve a genius. The twentieth-century “German catastrophe” (Friedrich Meinecke) looms ominously over such decisions, not just in sensationalist popular treatments, but in the work of Theodor Adorno – just as in more general controversies concerning nineteenth-century German history, above all the claim of a Sonderweg, or “special [German historical] path,” at its most extreme, viewing the Second Reich merely as a prelude to the Third. Unsurprisingly, Wagner’s attitudes towards a German nation, which, for most of his life, lacked concrete political unity except in the past, proved mixed, complex, and subject to development. However, one thread running through his ideas remained historical: the state of the German nation was in many respects to be attributed towards its particular history, which remained very much an ongoing tale, awaiting resolution.


1. Napoleon, France, and the Wars of Liberation


Thomas Nipperdey opened his history of nineteenth-century Germany with the words, “In the beginning was Napoleon.” They might also hold the secret to Wagner’s history of nineteenth-century Germany. 1813 was the year of the Battle of Leipzig and also the year of Wagner’s birth in Leipzig. Napoleon’s defeat, following his retreat from Russia, hastened the collapse of the First Empire, and pushed back French forces from German soil. Those German states allied to France now joined the opposing coalition. The legend of the Wars of Liberation, in which free Germans rather than their princes vanquished the French foe, began to be told and re-told, memorialized in popular rather than official monuments across a “nation,” a concept given new life by the French Revolution, still ruled over by those compromised princes. One can trace back Franco-German enmity as far back as one wishes, but the Thirty Years’ War (1618-48) and subsequent French political and cultural hegemony cast lengthy shadows. Eighteenth-century princes might imitate Versailles, but national aspirations pointed away from civilized court and salon to a truer, more honest culture, grounded, for instance, in the forests of the Brothers Grimm – or that from which untainted Siegfried emerges.

“Germany” often had truer existence as an opposing cultural force to France than as a political entity, not least during the 1840 Rhine crisis. Wagner’s miserable, homesick sojourn in Paris (1839-42) sharpened that tendency in his case. If meretricious entertainment (Meyerbeer) were French, then true art might be German. A performance of the German Romantic opera, Weber’s Der Freischütz, made a huge impression at this time: “It seems to be the poem of those Bohemian Woods themselves” (SSD 1:212).

Crucial to understanding Wagner, though often overlooked, are his birth and childhood in the Saxon cities of Leipzig and Dresden. Transformed by Napoleon from an electorate into a useful allied kingdom in 1806, Saxony had the misfortune to emerge from the Battle of Leipzig on the losing side. Most Saxon troops defected to the allied forces; King Frederick Augustus I was imprisoned; the state itself seemed imperiled, Saxony proving the great loser from the German states at the 1814-15 Congress of Vienna. Though Prussia failed to absorb her entirely, the remnant of the Wettin kingdom held but three-quarters of the territory of the new Prussian province of Saxony.


As Germans, looking askance at recent French cultural and political domination, increasingly wished for some form of national unification, questions arose: in what form and under whose aegis? A German Confederation formed part of the post-war settlement. Would this safeguard individual states’ rights, or furnish a battleground upon which Austria and Prussia would fight for supremacy? Would there be popular unification founded upon a national movement, as desired by many of the 1848-9 revolutionaries, Wagner included, or a traditional power-political aggrandizement by one or both of the two great German powers? And where would this leave other German states, members of the so-called “third Germany,” such as Saxony and Bavaria? Nineteenth-century history did not lead inevitably to Bismarck’s German Empire which, by excluding Austria, divided rather than unified the German nation. Until the Battle of Königgrätz (1866), there was everything to play for, and the French enemy, now under Napoleon III, remained to be defeated.


When Wagner, then, came to advise Ludwig II, earlier experience informed his judgment. Wagner remained at best ambivalent concerning the other German princes, yet suspicion of Prussia, a “barracks state” for many other Germans, always formed a crucial part of his outlook. Bismarck secretly made indirect contact with Wagner, attempting unsuccessfully to have him secure Bavaria’s neutrality between Prussia and Austria (Salmi, 197-99). The contrast, however exaggerated, between Prussian militarism and other states’ – Bavarian, Saxon, etc. – cultural achievement was a mainstay of discourse within those states. “Nationalism” involved many competing strands.


Moreover, though one does not necessarily associate Wagner later in life with Saxony, we find him in Leipzig, publicly and otherwise, more often than we might suspect. Nietzsche wrote to his friend, Erwin Rohde, of attempts to effect a first encounter: Wagner was staying with relatives in Leipzig, unbeknown to the press. When they met, Nietzsche was enchanted by Wagner’s reading from Mein Leben a scene from his Leipzig student days and observed, not for the last time, Wagner’s fondness for the local dialect (Letter of 9 Nov. 1868).


Wagner and Bismarck were both Germans; neither would have denied that, nor wished to do so. However, particular and particularist identities – both Protestant, but in many respects opposed – counted too. Wagner, on account of his role in the Dresden uprising, was barred for eleven years even from entering the German Confederation. It would take longer still before he would be permitted to return to Saxony. The grudging nature of the Saxon king’s initial concession was mirrored in Wagner’s claim – irrespective of whether one believes him – that he felt no emotion upon his return to German soil (12 August 1860). During exile, Wagner had been a German outcast, indeed outlaw, just like Die Walküre’s revolutionary Siegmund: “I was always outlawed.”

When German unification, such as it was, came from above, through Prussian aggrandizement, it is therefore unsurprising that Wagner’s initial approbation – again, one should not neglect the power of anti-French sentiment in the Franco-Prussian War of 1870-1, witnessed in Eine Kapitulation – soon turned sour. Admiration for the Chancellor’s achievement – “an honest Prussian who succeeded in carrying out a diplomatic coup: ‘At that time he still knew nothing about the German swindle, he was a complete Prussian’.” – is more than balanced a fortnight later by: “That is why I curse Bismarck – for dealing with all these very important problems like a Pomeranian Junker.” “Curse” was obliterated by an unknown hand and replaced by “deplore,” testimony to family sensitivities concerning Wagnerian German identity (CWD, 31 Oct. 1882 and 14 Nov. 1882). Karl Marx could not have been further from the truth, political as well as aesthetic, when answering, at the time of the opening Bayreuth Festival, the persistent question, “What do you think of Wagner?” with the dismissal: highly characteristic of the “New German-Prussian empire-musicians” (Letter to Jenny Marx, August/September 1876).

Wagner’s writings expressed such ambivalence and ambiguities. Die deutsche Oper (1834), his first published piece, expresses the wish that German opera were more open to French and Italian influences. However, during his “revolutionary” period, it becomes clear that the universal artwork of the future will transcend mere national style not so much through synthesis as by development of largely Teutonic art. An intriguing and often confusing companion to the aesthetically-inclined essays is Die Wibelungen. A conflation of history and myth presents correspondences between, for instance, Emperor Frederick Barbarossa and Siegfried, not only as historical-mythological figures but as revolutionary inspirations. It is hoped that these German heroes, asleep in the Kyffhäuser Mountains, might return, though an original (1848) exhortation for such an awakening was omitted in a subsequent published version, indicative perhaps of Wagner’s disillusionment concerning national revolution. Whoever Barbarossa and Siegfried may have been, they were not Prussians. 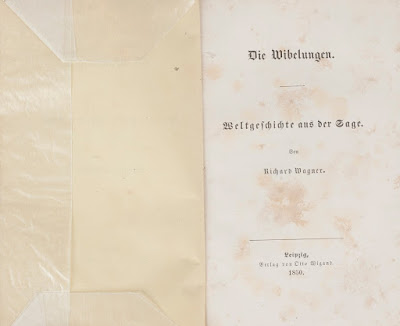 Subsequent interest in German history tended, in the spirit of Die Meistersinger von Nürnberg, to extol German art at the expense of German politics. A collection of essays written for Ludwig II was published in 1867, its title, Deutsche Kunst und deutsche Politik, reflecting this shift, likewise the contemporary essay, Was ist deutsch? (unpublished until 1878) asking, “what is German?” Influence and regard of Constantin Frantz are marked. Just as Hans Sachs proclaims that holy German art will endure no matter what political calamity might befall the Holy Roman Empire, so Wagner now chooses the forlornly French-periwigged Bach as epitome of the German spirit, his music triumphing despite both his wretched, unrecognized existence as choirmaster and organist, and Germany’s catastrophic political fortunes. (Lutheran-Bachian chorales loom large in the Meistersinger score, likewise neo-Bachian counterpoint.) Even when the Germans subsequently attempted democracy and revolution, they merely aped the French; German achievement lay with Goethe and Schiller. Enemies within were as much to blame as those without; what remained of the German spirit was imperiled by an alliterative trinity of J’s: jurists, Junkers, and Jews, elsewhere joined by Jesuits and journalists (SSD 10:61).


Subsequent generations have often striven to dissolve these ambiguities, or simply failed to notice them. National Socialism provides perhaps the most flagrant example, but it is far from alone. When Thomas Mann challenged hardening nationalist orthodoxy by presenting a more interesting, complex Wagner in a 1933 address, Leiden und Größe Richard Wagners (“Sufferings and Greatness of Richard Wagner”), he was rebuked in an indignant “Protest by the Richard Wagner City Munich,” which spoke on behalf of a “national restoration of Germany … [having] taken on definite form.” Though signatories, including Richard Strauss, Hans Knappertsbusch, and Hans Pfitzner, were not all National Socialists, this was one example of an effort to dissolve the ambiguities sketched above, or a failure to notice them. Such elision of Wagner with Nazi goals has continued to haunt Wagner scholarship and reception into the twenty-first century. The anti-Reich Wagner of Was ist deutsch?, let alone more universalist writings, would surely have objected.

However, performance may herald a degree of hope. Some stage directors, such as Stefan Herheim and Peter Konwitschny – notably both musicians themselves, able to confront Wagner’s dramas musically – have grappled more seriously with the multi-faceted view of German history evinced by Wagner and his role within it. Exemplary in this respect was Herheim’s Parsifal at Bayreuth, simultaneously re-telling Wagner’s story of Parsifal and the work’s reception story. Electrifying was the unfurling of swastikas, long absent from the Festival, as Weimar-artiste Klingsor cast his spear, but still more of a challenge to New Bayreuth orthodoxy was the reproduction on stage in the third act of Wieland and Wolfgang Wagner’s 1951 claim that politics had no place in such a festival. German history always was more interesting than that, as Herheim’s contradiction bravely demonstrated.