The ‘Representation of Chaos’, with which The Creation opens, is justly the most celebrated number in the oratorio, and it is clear from the sketches that Haydn took unprecedented pains over its composition. Heinrich Schenker wrote of Haydn ‘stretching and straining’ his musical means, to recall in its mysteries ‘the mysteries of Chaos’. Without the aid – or constraint – of a text, the composer depicts the universe prior to the Creative act, whilst also prefiguring that act. This movement does not begin in C minor; it opens with an emphatic unison C, of indeterminate length and indeterminate tonality. As Hegel would point out in the second chapter of his Logic, an absolute – that is, a true beginning and basis for all subsequent determinations – cannot in itself be determinate.

From the outset, Haydn evolves his tonality, but he does not immediately introduce a tonic chord of C minor. When the music first seems to be heading that way, he substitutes an interrupted cadence for the expected full close (bars 4-5). The cosmos does not evolve in a few seconds, even in Haydn’s concentrated chronology. As the musical conception develops, so do intimations of life. The very slow, swirling mass of nothingness – ‘the earth was without form and void’ – is breached first by a triplet figure (bar 6), and later by another sign of organized motion in chaos, a double dotted figure. Lawrence Kramer writes: ‘From a scientific standpoint, the … structure effects a heroic reduction of chaos to lawlike, quasi-mathematical regularity.’ Surging dynamic marking evokes the ebb and flow of the first tides, for it is from the oceans that the first life-forms will emerge. This was recognized in contemporary reviews, for example that in the Allgemeine Musikalische Zeitung of 21 January 1801: ‘… single notes come forth, spawning others in turn … Movement begins. Powerful masses grate against each other and begin to gestate … Unknown forces, swimming and surging, … bring tidings of order.’ As the Spirit of God moveth upon the waters, the life figurations multiply and subdivide themselves, and the seeds of order are sown, before we return to the void whilst awaiting the first words of this sacred drama. There had been some precedent for this in the germinal introductions to Haydn’s London symphonies – at any rate, all but no.95, which ironically is in C minor – but, harmonically rich though they be, this is an introduction of another magnitude, as befits an introduction preparing the way for the specific musical and verbal drama of Creation.

Donald Tovey points out that the ‘Representation of Chaos’ harmonizes well not only with the Biblical account of Creation, but also with the work of Pierre-Simon Laplace and Kant. In his Universal Natural History and Theory of the Heavens, disseminated widely since the 1750s, but even more widely during the 1790s, Kant had voiced the traditional Christian doctrine of Creation in space and time (whose validity would be both proven and denied in his subsequent, critical philosophy.)  He had argued that ‘there is a God precisely because Nature can proceed even in Chaos in no other way than regularly and orderly.’ Haydn, Tovey remarks, ‘did a certain amount of dining-out in fin-de-siècle London, [and] was as likely to have heard of the Nebular Hypothesis as a modern diner-out is likely to hear of Einstein and Relativity’.


This is supported by Haydn’s visit to the astronomer (and amateur composer) Sir William Herschel at his home in Slough on 15 June 1792. There Haydn was able to look through the telescopes of the man who, to all intents and purposes, added nebulae and the Milky Way to the scientific map and was the first man in modern times to discover a planet, Uranus. Unfortunately, Haydn’s notebook tells us very little about what he actually saw, save for the length of ‘the great telescope’, nor of what they said to each other. But a visit to this site of scientific pilgrimage – the King of Poland sent Herschel his portrait, and Catherine the Great requested specifications of his telescopes – would perforce have made a great impression upon Haydn. Science and religion did not stand mutually opposed; indeed, their close relationship is a key feature of Enlightenment theology. Thus Joseph Addison could write, in the early eighteenth century: ‘Natural philosophy quickens this Taste of the Creation, and renders it not only pleasing to the Imagination, but to the Understanding. … It heightens the pleasures of the Eye, and raises such a rational Admiration in the Soul as is little inferior to Devotion.’ Kant likewise emphasized the ‘harmony between my system and religion,’ which heightens his confidence in the veracity of his writings. And Herschel himself, in a rare clue as to his religious sentiments, wrote in a letter of 1794: ‘It is certainly a laudable thing to receive instruction from the great Workmaster of Nature, and for that reason all experimental philosophy is instituted.’

Nevertheless, God’s image has not been explicitly evoked in the ‘Representation of Chaos’. Its closing bars, therefore, mark a return to the mood of the opening, the pathos underlined by the descending flute solo and Neapolitan harmony. In a sense, then, the next section of the introduction renders explicit through words that which has gone before. The double dotted figure is hinted at following Raphael’s ‘In the beginning, God created the Heaven and the earth,’ and is soon stated most clearly (bars 69-71). But the explicit presence of God and His act of Creation make events take a different turn; this is not evolution in an eighteenth-century, let alone a Darwinian sense. Haydn’s outlook stands closer to that of Moses Mendelssohn’s Morning Hours or Lectures on the Existence of God, which we find in the composer’s library. This popular philosophy, derived to some extent from Leibniz’s rationalistic deism, has at its heart the necessity of God’s existence and rejection of Spinoza’s – and Lessing’s alleged – pantheism. An absolute, eternal mind is quite certain, since the testimony of the senses to an external world would be unthinkable without a necessary, extra-worldly being.


A generation earlier, the Swiss æsthetician, Johann Georg Sulzer, had written of the sublime (Erhaben), in his influential Allgemeine Theorie der schönen Künste:

We are moved as little by the wholly inconceivable as if it never existed. If we are told that God created the world ex nihilo … we experience nothing at all, since this lies totally beyond our comprehension. But when Moses says, ‘And God said: Let there be light; and there was light,’ we are overcome with astonishment because we can at least form some idea of such greatness; we hear to some extent words of command and feel their power.

Though Sulzer’s work was considered dated by some even at the time of publication (first edition, 1771-4), his is a typical view for eighteenth-century readers, writers, and listeners. It illuminates the importance of the word in Haydn’s Creation but also impressed upon us the magnitude of Haydn’s achievement in the ‘Representation of Chaos’. There, despite what many would have thought, he has shown that the apparently ‘inconceivable’ can be conceived and received in the sublime manner. Nevertheless, the sotto voce chanting of the chorus (‘And the spirit of God moved upon the face of the waters’) engenders a sense of expectation and tension, heightened following the words, ‘and God said: Let there be Light.’ Here, a generation before the choral finale to Beethoven’s Ninth Symphony, we have impressed upon us the necessity of the word – and the Creator’s primal, enlightening word at that, which confers retrospective meaning and direction upon Haydn’s preceding symphonic chaos.

Thus is the groundwork prepared for Haydn’s greatest coup de théâtre, ‘… and there was Light.’ This conception of courageous simplicity, the famous fortissimo C major chord, is entirely Haydn’s own: he ignored his librettist Gottfried van Swieten’s advice that the darkness should ‘gradually disappear’. It is a passage whose stunning effectiveness has never palled. Of the London première (28 March 1800), Charles Burney observed that ‘the generality of the subscribers were unable to disentangle the studied confusion in delineating chaos.’  Yet ‘the composer’s meaning was felt by the whole audience in this passage; there followed an instant interruption of rapturous applause.’ Haydn’s was a language that could speak across national boundaries. As late as the 1830s, when, as James Webster points out, Haydn’s music was ‘rapidly becoming passé,’ the æsthetician Gustav Schilling would write: ‘there is still no music of greater sublimity than the passage “And there was Light”, … in Haydn’s Creation.’ This entailed connecting ‘the finite and phenomenal … with the infinite and divine’. Such connection is precisely what the act of Creation is. 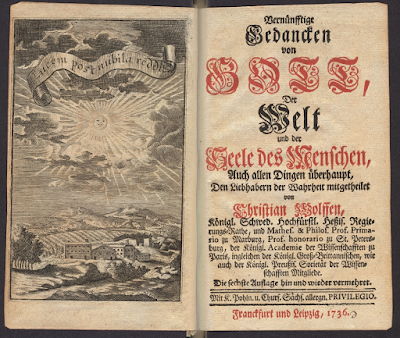 Light was a symbol that few in Haydn’s first audiences would have fail to recognize at some level; it was not simply or primarily a representation of the sublime, but was above all the quintessential symbol of Enlightenment.  Swieten had written to the Austrian Chancellor Kaunitz in 1774 of the need for ‘light’ in politics; a ‘blind’ people could readily be put to bad use. More generally, he had tirelessly urged the cause for a religious enlightenment of the people, that their faith might be grounded upon rational conviction. Joseph Anton Gall, a colleague of Swieten’s during the 1780s, and subsequently Bishop of Linz, explained that the Redeemer had returned the world to a semi-paradisiacal condition, that is, restored ‘Light’ to the world, since God in His goodness could not bear to leave man in his fallen state. In Leibniz’s Monadology (first published in German in 1720), monads are portrayed as simple, windowless entities, which, through the process of entelechy, strive towards greater and greater brightness until united with the brightest and most enlightened monad, God Himself. However it was interpreted, the symbol of Light was always on the side of the angels so far as men of the Enlightenment – be they Protestant, Catholic, or Deist – were concerned. Light had shone brightly from behind the dark clouds of superstition on the title page of the first major book written by Christian Wolff, Rational Thoughts on God, the World, and the Soul of Man. The Revelatory dazzling brightness of Haydn’s fin-de-siècle primæval Light shines all the more clearly.