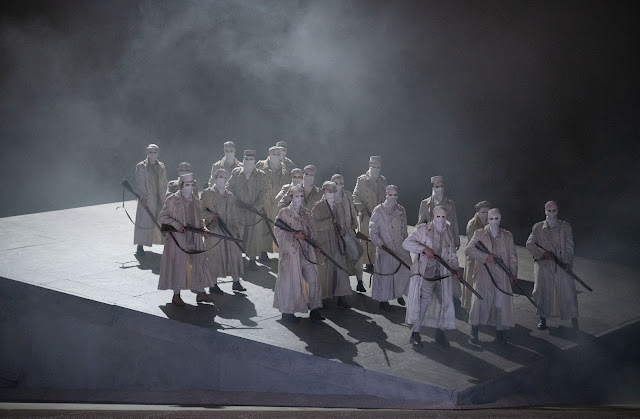 Like stagings of any opera – Elektra almost an exception – Carmens vary, though perhaps not so much as they ought. I have seen a few: from those that do not even to try (Francesca Zambello and her donkey, Aletta Collins for the embarrassing nadir of vapidity) to brilliant, interrogative reimagination (Dmitri Tcherniakov), via a valiant yet strangely tedious attempt to recreate (Barrie Kosky) and a relatively straightforward updating that yet remained on a dramatic knife-edge (Calixto Bieito). Not until now, however, had I seen Martin Kušej’s 2004 Staatsoper Unter den Linden production.

Situated omewhere between Bieito and Tcherniakov, albeit closer to the former, it holds up very well, especially when conducted by Daniel Barenboim, who knows it of old and offers, so it seems, a reading of this rather than a generic Carmen. There is little, thank God, of the picturesque here. In a production that put me in mind somewhat of his 2003 Don Giovanni (Salzburg), Kušej, like Barenboim, presents a dark, large-scale tragedy, in which even moments of interiority, emerging painful in their loneliness, seem defined by a grander canvas of the implacable. It stands a world away from the work’s opéra comique origins, which may concern some. All the worse for them; so, after all, are we. The question is whether it works, and it does. In that respect, I recalled another Salzburg Mozart production, Claus Guth’s 2006 Figaro. It sounds, disregarding as it does so much of what we might consider ‘essential’, as though it should not work, at least on paper, yet it does, having one reassess both the work internally and its place in a broader scheme of theatrical drama. 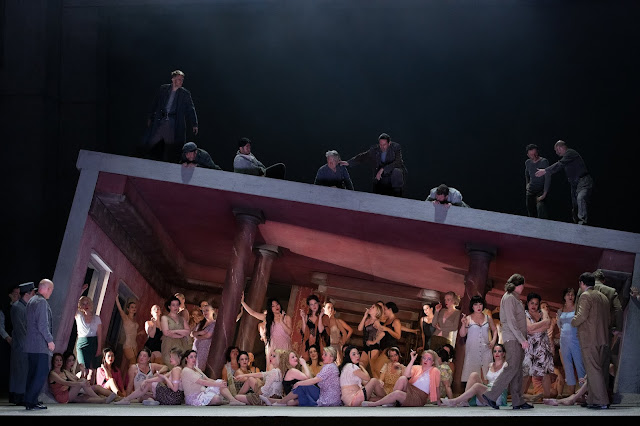 That fatal relationship between internal and external may indeed be understood to lie at the heart of this staging. A soldier faces a firing squad as the curtain rises: a daily occurrence or a foretelling of something unique? There is no need to choose, any more than there will be later when Carmen reads her cards, ostensibly with other the gypsies, yet actually alone, physically and psychologically, at the front of the stage. Jens Kilian’s elemental designs and the harsh environment – more Lorca than Mérimée? – in which they appear to be situated sometimes revolve to reveal something beneath or beyond, albeit through eyes we may wish or claim were not ours, yet unquestionably are. There is something pornographically joyless, recalling the director’s Don Giovanni, to the couplings that ensue when soldiers – and we – penetrate the hitherto mysterious factory. There will be along, whether at Lillas Pastia’s, in the mountains, or at the final bullfight. That is not to deny, but rather to heighten, the extent of violence at work, whether implicit or explicit, externalised or sublimated. Much of what unfolds may be ‘just’ something to do. Better than doing nothing? Perhaps: it is difficult to say; this does not seem to be a world given to reflection. We ask what Wagner means by love all the time; why not, at least on occasion, what Bizet does too?

Nietzsche’s clarion call, ‘il faut méditerraniser la musique’, to exalt the sunny physicality of Carmen over the northern, décadent idealism of Wagner and worse, his disciples, comes ironically to seem the height of sentimentality, a typically German exaltation of ‘the south’ and evasion of the much-vaunted truth. Myth, instead, returns, a cold, hostile chorus, at least in external terms, not only participating in the action but holding it to scrutiny. Masks at the last invite the full, Attic horror we deluded ourselves was not really involved. Perhaps Wagner was right after all; at the very least, his tragic forebears seem to have been. The circle ultimately is closed, Carmen closing as it had begun; Don José faces a firing squad. The curtain falls, catharsis denied.

If it would be a gross exaggeration to call Barenboim’s conducting of Carmen Wagnerian, such exaggeration may point, circuitously, in the right direction. Everything was not frenetic; all was not, in the banal sense, merely ‘colourful’. There was at times something almost glacial to the work’s progress, in recognition of bolder claims and connections. There was space – and this was not only, or even principally, a matter of speed – for reflection, for questioning, for self-interrogation. Savage turns, sometimes yet not always pretty on the surface, could then register with the bite they deserved. With the Staatskapelle Berlin playing at the height of its powers, resonances which rarely if emerge were able to do so. At the opening of the third act, for instance, truly exquisite horn playing, tone and phrasing clear as they was warm, momentarily had me imagine, if not a Mahlerian vista, then of an attempt to summon one up. It was not that playing or conducting in any sense suggested Mahler, let alone ‘sounded like’ such music, but rather that this was not a performance delimited by self-imposed constraint; it was open to what we, as well as it, might bring to the work. I realised that Berio’s play with Spanish Boccherini, Quattro versioni originali della ‘Ritirata notturna di Madrid’, was closer to the mark; rather it soon became so. We were not so very distant, then, from Seville after all. The scale and cruelty, however, of the musicodramatic canvas, or rather the cruelty that could develop within, was the point, mirroring, intensifying, even inciting what unfolded onstage.

Much unfolded courtesy of Anita Rachvelishvili in the title role. Her lower register must be heard to be believed: not only its tonal richness, but also what she accomplishes with it. Hers was a magnetic, thoughtful, and far from lazily conventional performance from beginning to end. Likewise Michael Fabiano’s typically committed Don José. Christiane Karg’s Micaëla was perhaps not best served by the concerns of the staging, yet beguiled anyway. The chorus, inexplicably booed by one audience member behind me, was excellent in every respect, a good few of which would not always be called upon in a production of Carmen; likewise the large cast of extras. Jaka Mihelač, Ziad Nehme shone remarkably as Dancaïro and Remendado, whether in stage or vocal presence. Only Lucio Gallo’s woolly Escamillo seriously disappointed, more a minor Sopranos character than a virile toreador. If not every cast member’s French language and style perfect, it would be curmudgeonly to say more than that; the dramatic whole outweighed any minor shortcomings. A Carmen, then, to make one think; there are all too many others for those who would rather not.