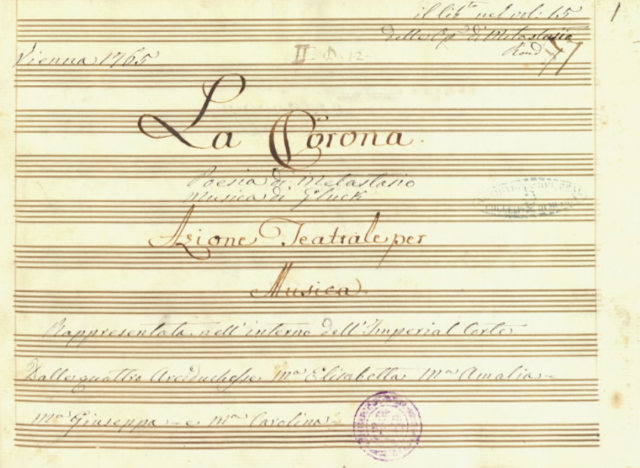 
La corona: Bampton Classical Opera certainly selected a title for our times. However, the English translation under which it was promoted, The Crown, not only has televisual contemporary resonance, but reminds us that every crown, though arguably a misfortune, is not quite a sign of a deadly virus. Not that the eighteenth century, at least until its close, saw things that way. In Europe, at least, monarchies seemed the height of modernity, the path to the future. The old prize of universal monarchy retained currency, albeit in conflict with more novel notions of the balance of power. Those few republics remaining were ailing, unlikely models for human flourishing. And at the centre of Europe remained the Holy Roman Empire and Habsburg monarchy, recently separated yet now once again reunited under Francis (Stephen) I and Maria Theresa.


This was the last of the dozen Metastasio libretti the Vienna court poet named ‘azione teatrale’: that is, a serenata, with definite action and to be staged. We should not get too hung up on the term, more a vague description than a genre; it is difficult to say why, say, L’isola disabitata (as set by Haydn, among many others) and Il sogno di Scipione (as set by many before Mozart, and at least one after him) should be considered such and other, similar works should not, let alone why the Orfeo of Calzabigi and Gluck, quite un-Metastasian, should originally have received that designation.


Gluck’s music, now lost, for an Iphigenia in Aulis ballet, first written for the Imperial Castle at Laxenburg, had been given once more a few months later at Innsbruck for the 1765 wedding of the Archduke Leopold (later Leopold II) to Infanta Maria Luisa (who later notoriously dismissed Mozart’s La clemenza di Tito as ‘una porcheria tedesca’). Having left the theatre at its conclusion, Francis suffered a fatal stroke in his carriage. The theatres closed and the azione teatrale in preparation for Francis’s name-day, in performance by a quartet of his daughters (the Archduchesses Maria Elisabeth, Maria Amalia, Maria Josepha, and Maria Carolina), went unperformed until a 1966 Austrian radio broadcast. Staging had to wait until 1987, in Schönbrunn’s Salon de Bataille, where Gluck’s premiere would have taken place.


The present performance, however, was given in concert, like the British premiere, also from 1987, slightly earlier, at the City of London Festival. In place of secco recitatives, we had a linking English narration. Having drawn inevitable reference to the other ‘corona’, it clearly told us where we were, what was going on, and sketched a broader mythological and literary context, lightly yet learnedly allusive. Context, that is, to the slight tale of who should take credit for the Calydonian boar hunt: ultimately neither Atalanta nor her sister, Climene, neither Princess Asteria nor or Prince Meleagro, but the goddess Diana. It culminates in bestowal of the crown of laurels on the keen royal huntsman Francis. Rosa French delivered her narration with elegance and wit.


The music is fresh, in many respects glorious, certainly well deserving of greater acquaintance, though this is no drama in the sense of the ‘reformist’ Gluck. (Nor was it intended to be.) Robert Howarth’s direction from the harpsichord of CHROMA was forthright and unfussy, well judged in balance and tempo, if occasionally a little four-square for my ears in negotiating Gluck’s structures. (We clearly hear Gluck differently, which is no crime. Far better this, in any case, than egoistic conducting that aims above all to draw attention to itself.)


All four singers acquitted themselves with honour, complementing and lightly contrasting as befitting. The extremity of Atalanta’s coloratura—could the Habsburg-Lorraine princesses really have come anywhere near singing this music?—was effortlessly tamed by Samantha Louis-Jean. Lucy Anderson’s spirited Asteria and Lisa Howarth’s sincere Climene were equally stylish. So too did Harriet Eyley’s Meleagro, whose heroism en travesti, both bright-toned and variegated, proved just the ‘early Classical’ ticket. If the splendid penultimate number, a duet between Atalanta and Meleagro, left both in peril of being outshone by Emma Feilding’s oboe, then that is Gluck’s doing. A joy from beginning to end, whatever our views on crowns, viruses, and their intersection.