Holocaust Memorial Day falls on 27 January, thus poignantly entwined—forever?—with the birthday of Mozart. Much could and doubtless should be said about that dialectical relationship, but let us leave that for another time, perhaps when I am once again able to travel to Salzburg and its Mozartwoche is once again able to take place. The BBC/Barbican annual Total Immersion day or weekend—this year a day—was, however, able to do so, offering much food for thought and contemplation. This year, we approached a commemoration that calls into question, many would say irrevocably denies, the possibility of historical ‘normalisation’, by way of music (mostly) from Nazi prison camps, above all the ghetto of Theresienstadt/Terezín. Simon Broughton’s 1993 documentary film offered an excellent introduction: informative, evocative, and, through its interviews with and performances from survivors, touching too. It is difficult to imagine the BBC making such a film now, but thank goodness it did then.

Two of the three composers featured in the first of three concerts also featured in that film. Hans Krása and Pavel Haas were joined by Erwin Schulhoff, who met his end at another of the camps, Wülzburg in Bavaria. It was unclear why the concert was named ‘The Theresienstadt Orchestra’, since Schulhoff’s Fifth Symphony was not performed there, nor indeed anywhere else until 1965; but never mind. The BBC Symphony Orchestra under Alpesh Chauhan gave sharp, committed performances of all three works, though the spiritual sense of a memorial seemed strangely absent. Krása’s Overture for Small Orchestra, the ensemble essentially a matter of what was available to him, was light, at times sardonic, almost a Central European response to French neoclassicism, with an especially virtuosic piano part. It was nothing adventurous, yet well crafted and performed, with a nice twist for its sign-off. Where Krása had offered an ensemble of many soloists, Haas gave us massed strings in a more substantial piece whose fugal writing and more general counterpoint brought us closer to contemporary Hindemith than to Haas’s teacher, Janáček. Lively cross rhythms perhaps suggested otherwise. During its relatively short span, it packed in a considerable amount of material and invention. There was moving fragility and resolve to its ultimate contrapuntal restoration.

Schulhoff’s symphony opened with great promise, its first movement ominous, full of foreboding, as if the walls of his incarceration-to-come were already closing in. The tread of a march in slow motion, deliberate in both senses, seemed as though it might go on forever—then suddenly stopped, which I assumed to be the point. A slow movement somewhere between Franz Schmidt and Prokofiev, with some of the former’s post-Bruckner tendencies, and some of the latter’s harmonies, nonetheless looked at times to a different, darker, and perhaps more cinematic world. If it perhaps went on a bit long, many of us are used to forgiving that failing in other music. A furious and frenetic scherzo, its repeated frustration apparently imbued with definite, even fatal meaning, seemed still more intent on bearing witness to its time, courting comparisons with a contemporary piece such as Martinů’s Double Concerto for Two String Orchestras, Piano, and Timpani. This was a tremendous performance, driven in a good way, and above all brutal, in what came across as a forceful if not overtly complex work. Alas, its finale hovered on the edge of incompetence (as composition, rather than performance). Its opening intrigued, suggesting grim nobility to a chorale that might ultimately triumph or, knowingly going through the post-Mahlerian motions, not. It never quite hung together, though, more damagingly extending for what seemed an unmerited eternity. I could not help but wonder whether it would be better given as a three-movement work, omitting the finale entirely. 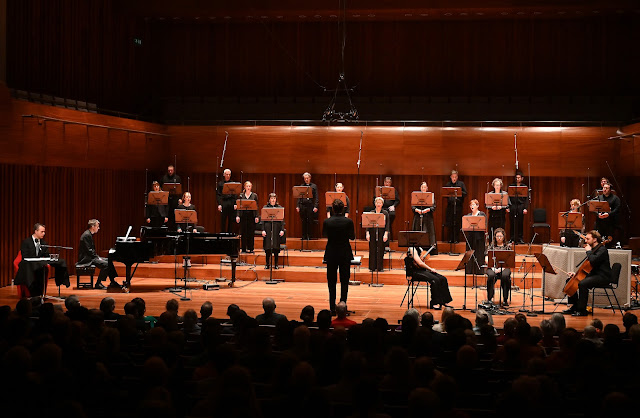 The second concert, for which we crossed over the road to Milton Court, was perhaps the most successful of all. The brainchild of baritone Simon Wallfisch, who not only briefly sang but devised the programme and read from letters and diaries more properly to remember those who lost their lives, it offered not only a touching memorial but also a valuable conspectus of artistic production, performed by the BBC Singers, young instrumentalists from the Guildhall, and Nicholas Chalmers. What might not seem the most intrinsically interesting of choral music was transformed by our knowledge of its educative role at Theresienstadt, where education was prohibited but keeping children busy was not, singing falling into that category. And what one could learn by singing, as one of the readings reminded us. Here the determination to bear Jewish witness was one of the many things experienced, for instance through by Two Hebrew Pieces and Yiddish Songs by Viktor Ullmann. Gideon Klein’s String Trio, concise and almost shocking in its mastery, received a fine, comprehending performance, every bit as involving in more ‘purely’ musical terms as it was in remembrance. Cabaret was present too. An arrangement of the closing chorale from Ullmann’s Kaiser von Atlantis looked forward to the evening. But this finely planned selection was so much more than the sum of its parts. It is to be hoped that Wallfisch has opportunity to give it elsewhere.

And so, to the evening, where we saw a resourceful concert staging of Ullmann’s celebrated opera. It was haunted not only by the opening pageant of characters walking on stage, Death laying down a suitcase (of course), others picking up props from it, but later by a shocking interpolation of sound from without the camp: a sound of actual war, and then of crowds hailing Hitler (for whom, read the Emperor). But it was the early parody of Mahler, the ‘Trinklied vom Jammer der Erde’, life both overflowing and fundamentally tragic, that hit home most strongly for me, fruitfully, fatally overshadowing what was to come. A fine cast, the BBC Symphony Orchestra, and Josep Pons, captured our attention and never let it wander. This is not Brecht-Weill; nor should it attempt to be. It breathed a sadder, more unmediated, yet undoubtedly sincere air: not a work one wishes to encounter often, but which one definitely should from time to time. Quite what Messiaen’s Quartet for the End of Time was doing in this company, I do not know. Musicians from the Guildhall gave an impressive performance, especially so during its passages—movements—of slow ecstasy. A prison camp, whilst no fun, was not, however, a concentration camp. Messiaen’s compositional mastery seemed to accentuate the divide further, giving an unfortunate impression of climax upon the day’s towering (acknowledged) musical masterpiece. Audience whooping at the close only made matters worse. It was a pity, but we had heard—and learned—much of very different value before.