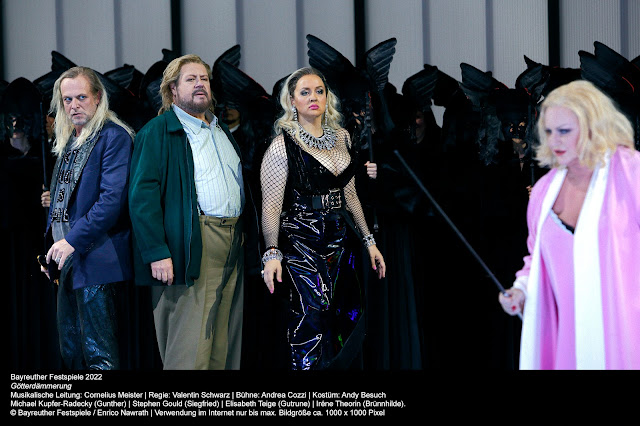 Valentin Schwarz’s Ring ends more or less where it began, bar curtain-calls in which the long-awaited appearance of Schwarz and his team was greeted by the most intensive booing I have ever heard. I suppose a ‘cyclical’ turn will appeal to some who insist on referring to the Ring as a ‘cycle’, when it is nothing of the sort. Even those, however, who discern some kind of return at the close will have wanted a little more for their money than a hasty, borderline-cynical return of dual umbilical chord babies on video, and, prior to that, of a swimming pool for the Rhine.

Schwarz’s unwillingness or inability to formulate any kind of concept, let alone to present it successfully, has long since had hopes for drama run out of steam. Unwillingness—let us be charitable—to carry though any coherent correspondence between objects, themes, even often characters, leaves us with an incoherence that does not register as an aesthetic challenge, but simply as a careless mess. Siegfried apparently forgot to take Notung with him—or rather, the director forgot that he should. It was there, but Brünnhilde kept it, storing up various trouble for a final scene to the first act. This is not a matter of highlighting contradictions, already existing or even newly created. It is not freely associating; indeed, it is barely associating at all. It seems to speak more than anything of lack of acquaintance with Wagner’s work and—which may or may not be fair—sheer laziness. Like a child with an extremely limited attention span, Schwarz presents something, tires of it, presents a new thing without bothering to connect it to the previous thing, and continues. Occasionally, some older things return, yet neither with dramatic reason nor insight. To list them is almost the only thing one can do, given such absence of the conceptual; but it quickly becomes tedious, so I shall try to remain (relatively) selective.

The dark-haired boy we first saw in Das Rheingold shooting others with a water-pistol at the swimming pool seems in some sense to have become the gold, the ring, young Hagen, and now—oddly, having aged far faster than everyone else—‘old’ Hagen. A girl, who may or may not be the same as one also marked out at the swimming pool, who in turn may or may not be the same as the one Erda a little later seemed keen to protect, seems at times to take on the mantle of the ring, although there is also from time to time a ring too (which, given generally dim lighting, most of us can barely see). What we are supposed to make of that girl’s disappearance during the final scene, or indeed anything much in a scene that sadly had many in the audience laughing at its sheer ineptitude, I have no idea. Hagen’s return right at the end, stumbling on to shout ‘Zurück vom Ring’ (is he advising people to stay away from himself?) and then stumbling back off again, was not the least embarrassing episode in a renewed, though hardly rejuvenated, string of scenic non sequiturs.

Personal assistant Grane is still around too. It is hardly unusual for the gods to have nothing god-like to them at any stage whatsoever, though such is at best a one-sided view. Rarely if ever before, though, can they have been so recklessly divested of all character, even much in the way of motivation, and for that to have been the fate of dwarves, giants, heroes, and humans too. Turning a horse into a man in a suit does not seem much compensation, or even relevant. Anyway, Grane goes with Siegfried into the world (actually, back to part of Fafner’s house, I think) to encounter a Gunther who slightly resembles Peter Stringfellow or even Jimmy Savile, but whose inspiration a German friend tells me is a trashy television series called Die Geissens – eine schrecklich glamouröse Familie. Gunther wears a sparkly top that asks ‘Who the fuck is Grane?’ Quite, though one might ask that about anyone here, really. Grane is later beaten to something not a million miles from horsemeat. Gunther leaves the carrier bag with pieces of his body by the pool for Brünnhilde in pink dressing gown eventually to pick up Grane’s head to sing to. The unfortunate image resembles Golden Girl Rose Nylund doing a turn as Salome on her way to collect midnight cheesecake, albeit with none of the fun or interest that might entail. 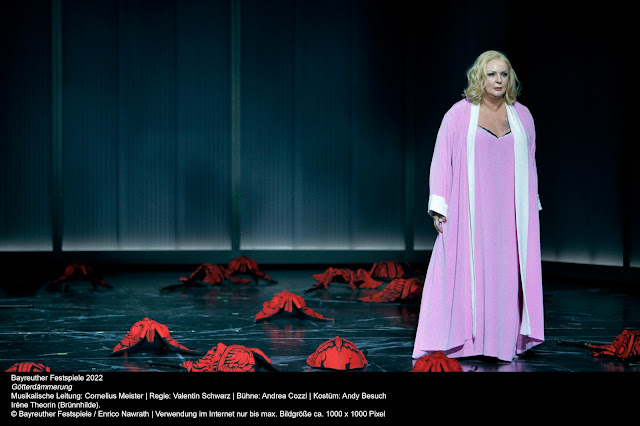 But poor Brünnhilde (seriously). She too has been subjected to pretty horrific, all too casual abuse, seemingly to no end other than as something else to do (and not in a Clockwork Orange sort of way either). How much, if at all, violence towards women should be depicted on stage (or screen), especially by men, is of course very much a live topic at the moment. There may be no definitive answer, yet it is hardly a question simply to be ignored or, worse, trivialised. So many important questions, moreover, are treated similarly. Alberich’s alleged inability to father Hagen—‘it is not entirely clear’, writes dramaturge Konrad Kuhn in the programme, ‘how he could have conceived a son’—is at best problematical. ‘How,’ asks Kuhn, ‘did this “nasty”, this “hairy and hideous imp” … beget a child with the proud Queen Grimhild?’ Perhaps using the power he has amassed by foreswearing love? There is not much of a mystery, here, really, let alone inconsistency, though what form of power is of course open to speculation and interpretation. Instead, though, we end up with something that trivially disrupts the very parallelism the production seems to wish to construct between Wotan and Alberich, and arguably has more than a pinch of ableism to it. (Some might argue racism too; let us leave that for another day.)

Even Cornelius Meister’s conducting, a solid highlight of the previous three evenings, proved more mixed here. There is no shame in that; many conductors, at the best of times, are more successful in some parts of the Ring than others. That the prologue and first act in particular dragged, often seeming to lie behind whatever notional basic tempo had been set, was nonetheless unfortunate as nonsense upon nonsense unfolded onstage. That episodic quality continued into the second act, received with unusual rapture by the audience, but which to me lunged and lurched too often, making all too little musical sense. The third act, though, was much better, a sense of form as living structure once again imparted. There is no reason to think that the rest of the work will not follow in time. The Bayreuth Festival Orchestra, doubtless understandably, sounded at times tired. As an audience member, one could certainly relate. There were some splendid passages too, but this was not a vintage night for Wagner musically. 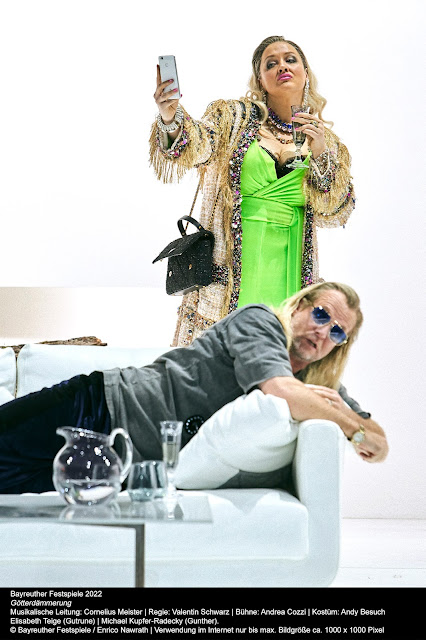 If vocal performances did not always reach the heights, nor did they ever fall below a reasonable level. Olafur Sigurdarson’s Alberich and Albert Dohmen’s were typically intelligent portrayals, founded in the poem and employing its musical marriage to considerable effect. Insofar as one could avoid Schwarz’s weird conception of Gunther—was he supposed to be high, or just very, very peculiar?—the same could be said of Michael Kupfer-Radecky in that role. If quality of diction came and went, there was much to appreciate in Iréne Theorin’s Brünnhilde, who managed to maintain a considerable degree of dignity, events around here notwithstanding. Fullness and bloom of voice were often as impressive as her sheer resolve to get on with it. Clay Hilley, a very late substitute as Siegfried, did more than could reasonably be asked of him. Not once did his voice tire; he committed himself with apparently equally enthusiasm to what was going on dramatically. Elisabeth Teige’s Gutrune was not helped by the production—who was?—but was a convincing vocal performance. Waltraute did not suit Christa Mayer quite so much as Fricka, but there was little doubting the quality of verbal response. The Rhinemaidens and Norns were all very good. If the chorus was far from overwhelming in the Vassals’ Scene, perhaps Covid restrictions were still in play; it looked as well as sounded smaller than usual.

It made for a long and dispiriting evening, though. I am only too aware of precedents, of how, say, Patrice Chéreau’s first run met with uproar and incomprehension, proceeding to become perhaps the best loved (and esteemed) Ring of all time. Not having been there, I can only speculate, but many have said it improved radically during its stint, a tribute to Bayreuth’s Werkstatt principle. Perhaps this might too, then; or perhaps I might change my mind and come to recant, as I did with Frank Castorf (parts of whose production I had, though, always admired). No one would be happier than I to admit he was wrong if so. It is far from the case that every idea advanced is unworthy of consideration; the problem more is that the production itself barely deigns to extend that consideration, already having jumped on something else. I think there would have to be a greater willingness, indeed any at all, to extend the frame of reference beyond a rich, unlikeable family. Why should we care, if that is all there is? Characterisation would help, to put it mildly, but so would a sense of the political and indeed the religious—of context whether broadly, specifically, or both (ideally). There is, it seems, no getting around that—and it is unclear why Schwarz, Kuhn, and company are so determined to try.