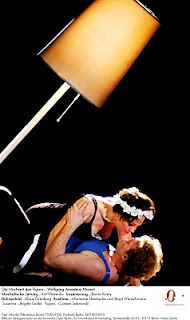 Comedy clearly means different things to different people, and, to be fair, it can unquestionably mean different things in different contexts. I was, however, quite unprepared for Barrie Kosky’s reduction of Mozart’s and Lorenzo Da Ponte’s – not to mention Beaumarchais’s - sophisticated comedy into an incoherent farce centring, bizarrely and apparently arbitrarily, around a middle-class Jewish wedding. Having greatly admired Kosky’s Abu Ghraib production of Iphigénie en Tauride for the Komische Oper, I was intrigued as to what political point might be made here. None at all, it seemed – and, indeed, it was difficult to find any point whatsoever being made. Moreover, where Kosky’s sensitivity towards Gluck’s score had been noteworthy, it was difficult to find any sense even of respect towards Mozart’s, since more than once, it found itself interrupted by directorial imposition, whether from the Count’s extraordinarily loud mobile telephone, a weird, Klezmer-like accordion interpolation during the third act dances, or, perhaps worst of all, Bartolo’s rendition of My Way in the middle of the fourth act.

I eventually gave up trying to discern any coherence to this Carry on Figaro. Insofar as it matters, various people – it is not at all clear why they were living together in the same house – seemed to be gathered for a wedding. Many extras kept appearing out of highly contrived – and not in Da Ponte’s sense – stage openings and engaging in slapstick activities. Sometimes the libretto, in German translation, was tampered with. Marcellina’s cry of ‘Mazel tov!’ was not the first and certainly not the last instance. At other times, the more-or-less original text was rendered nonsensical: what on earth did it mean to speak of the Count’s embassy to London, Cherubino’s commission, or the old days in Seville? It seemed very odd that the Countess should sleep in a closet, by which I mean a place for storing clothes, rather than anything more interesting, though the brief interlude of lesbian dancing during the third act female chorus might have led somewhere – alas, it did not. The truly bizarre transformation of Basilio into something beyond Sascha Baren Cohen’s Brüno, replete with tight cycling shorts and a desperate tendency to try to hump every male leg that moved, amused some, but for this reviewer seemed merely to regress beyond the days of the late Kenneth Williams. As for the strange scent of apples sent out through the theatre at the beginning of the fourth act, I cannot begin to attempt to explain. Where were the social tensions, whether of Mozart’s declining society of orders, or any other time? There was no fruitful tension, or even just tension, between work and staging, so far as I could tell, just a lack of connection. Doubtless this is all terribly anti-post-modernist of me, but here I stand… 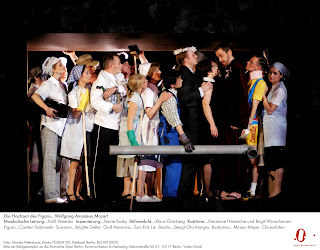 It is, then, a relief to relate that the musical side of things was much superior. Figaro in German is always going to sound odd to me; I listen to it for Furtwängler’s sake, but that is generally the only reason to do so. And the German language is no more suited to Mozart’s lines here than English is. German does not lend itself to such quicksilver delivery, especially during recitatives, a necessary qualification not always realised in performance. It was thus a relief to hear Non so più cosa son, cosa faccio in Italian; presumably the idea was that Cherubino had written the song in a foreign language. Quite why, who knows? The particular elegance and sentiment of slower arias does not translate well either.

Nevertheless, as I said, the general level of musical performance impressed. Patrick Lange encouraged a full, decidedly non-authenticke sound from the orchestra, which played with verve and with tenderness. There were occasions when tempi were on the fast side, but few conductors nowadays, Sir Colin Davis excepted, are likely to satisfy entirely in that respect. There was a commendable flexibility to Lange’s approach, which stood light-years from today’s merely fashionable. I was a little puzzled by the fortepianist, Pawel Poplawski’s Meistersinger interpolations, and a little more puzzled that no one else appeared to notice.
Given that the singers’ energies were perforce often directed to the business of stage action, there was much to admire vocally too. Tilmann Rönnebeck, himself a substitute Figaro, was ailing, but did a more than manful job in the title role. Hoarse by the fourth act, he had managed to hold a little in reserve for his final lines, and could certainly act. Christina Landshamer was a lively, sweet-toned Susanna, without a trace of the irritating quality that can sometimes attach itself to portrayals of the character. Tom Erik Lie had the masculinity of voice required by the Count, but his consort, Ina Kringelborn, did not quite attain the requisite grace and nobility. She was not, of course, helped by a production that presented her merely as an annoyed, pampered wife, whose ultimate forgiveness was childlishly undercut by a final finger-wagging. (That moment of forgiveness should be divine in its nature; here, theology was replaced by the sitcom.) Christiane Oertel and Hans-Peter Scheidegger’s Marcellina and Bartolo emerged as more central characters than is generally the case: well-sung and, in Oertel’s case, convincingly sassy. Thomas Ebenstein certainly threw his all into Kosky’s outlandish conception of the Almavivas’ music-master. Clearly a talented singing actor, it would be good to hear him again (see here) in a more conventional portrayal. 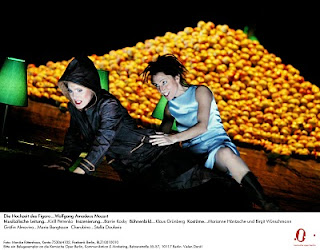 Perhaps it indicates a lack of a sense of humour that I do not find lots of coat hangers falling down or someone manically waving around a vacuum cleaner intrinsically hilarious; perhaps it renders me ‘elitist’ that I look for something more in The Marriage of Figaro. But there it is. It seemed to me a great waste of considerable musical talent. At least the production was not inflicted on the more fragile Così fan tutte.
Posted by Mark Berry at 7:02 pm

Isn't there a little video about this?