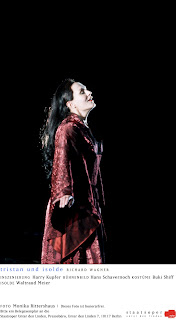 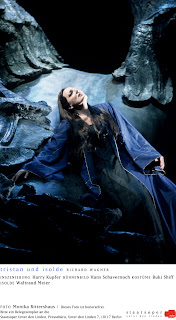 To direct Tristan und Isolde must be one of the most difficult tasks in the operatic world, though not of course so difficult as to perform it. Wagner, notoriously yet surely correctly, fretted about its power, writing to Mathilde Wesendonck, ‘I fear the opera will be banned – unless the whole thing is parodied in a bad performance –: only mediocre performances can save me! Perfectly good ones will be bound to drive people mad, – I cannot imagine it otherwise.’ If a ‘perfectly good’ performance in the strictest sense remained elusive – has anyone other than Furtwängler accomplished that? – this was, in terms of staging and performance, probably the best overall that I have seen and heard. No one in my theatrical experience has matched the conducting of Bernard Haitink at Covent Garden, and he too was blessed by a good, albeit generally uncomprehended production, that of the late Herbert Wernicke, but the startling, indeed staggering, vocal inadequacy of the Tristans conductor and audience had to suffer could not, alas, be entirely overlooked. Moreover, of the three Tristans in the theatre I have heard conducted by Daniel Barenboim, this was surely the best, above all in as searing a first act as I have ever heard, reminiscent of Karl Böhm at Bayreuth.

But let us return first to the matter of directing Tristan. The difficulty seems largely to centre upon the necessity to do very little, not something that comes easily to many directors. And by saying ‘do very little,’ I do not suggest reliance upon a superficial, empty minimalism, for, at the same time, something must be done. A concert performance could certainly work, up to a point, and would be vastly preferable to most of what is put before us, but staging nevertheless makes all the difference. Perhaps it is because, in Tristan, Wagner came closest to the Attic tragedy he so revered, that straightforwardness seems the only viable course here. (A production with masks might be an ‘idea’ with potential.) There is no point in suggesting that Tristan is ‘about’ anything other than what it is about, which might sound tautological and probably is, but it is certainly the case that some productions, profoundly unfaithful to a work, can succeed in turning it into something else. This does not seem to be the case with Tristan.

It needs, then, an intelligent director with the humility to recognise these difficult truths. In this resurrection of Harry Kupfer’s 2000 production, its thirty-second performance, the drama found just that. (About the intervening production, which I saw twice here at the Linden opera house, the less said the better, or at least the more deferred until another occasion the better. Covent Garden’s recent mishap with Christof Loy was considerably worse.) Kupfer is not a director averse to ‘intervention’, but here he shows an awareness of when not to intervene. To transform Wagner’s metaphysics into bourgeois drama might tempt some – though I cannot imagine why – but Kupfer and his team (Hans Schavernoch and Buki Schiff) avoid that trap. Non-specificity seems to suit this particular myth best, and that is what we saw here. The work is no more ‘about’ Cornwall than it is ‘about’ whatever directorial conceit one often must suffer. Nor is it in a straightforward sense ‘about’ the time at which Wagner wrote it, though considered references as opposed to wholesale relocation will probably do no harm. So we have a mix of the timeless and vaguely nineteenth-century costume, neither fetishised, both at the service of the drama. And likewise we have as the centrepiece of each act a fallen angel, with a Victorian touch of ‘bad nineteenth-century,’ such as Thomas Mann would surely have appreciated, but more importantly, a revolving space for the true, inner action, and an ever-present reminder of the fallen human condition. If Schopenhauer had understood, he would have approved.

Barenboim’s musical direction was equally fine. I have already mentioned the outstanding first act, heard as if in one breath, and with a dramatic surge such as one might fear one would never hear again. The following two acts were perhaps not quite pitched at the same level, but nor did they fall far short. And the playing of the Staatskapelle Berlin, whose praises I have often had cause to sing, was simply magnificent. The depth and tone of the strings were such that one could have mistaken them for Bayreuth of a certain vintage: no Philharmonic-style internationalisation here. The woodwind solos – not just that bass clarinet – were, aided by Barenboim’s balancing, dramatically telling and radically prophetic of Wagner’s successors, from Debussy to Schoenberg and beyond. One of Barenboim’s strengths in Wagner has been his awareness of a certain degree of ‘French’ style that can work here, whilst remaining fundamentally true to Furtwänglerian inspiration. This orchestra truly sounded as if it were representing the Schopenhauerian Will and the Greek chorus, twin poles of Wagner’s orchestral æsthetics.

It may come as no surprise to hear that Waltraud Meier turned in a superlative performance as Isolde, but it still must be said. She lives the role like no one else alive and perhaps offers a more rounded, nuanced portrayal than many of her revered predecessors. Commanding the attention through vocal and stage presence, she was so much more suited to this production than to that in Paris. And, crucially, the production permitted her dignity, assumed as to the manor, or rather to the crown, born. My accompanying friend, whom I had doubtless bored to tears by previous raving, now understood why I had tested her patience so. René Pape must likewise surely be today’s Marke of choice. It is a role in which many succeed, as grateful as that of Tristan is not. But to ally dignity and forbearance with quite such beauty of tone is a rare gift indeed. Roman Trekel had a surprisingly shaky start as Kurwenal, sounding tired, but this was soon overcome by a searching, moving account. Amongst the smaller roles, Florian Hoffmann proved as sweet a toned Shepherd as I can recall, marrying to that vocal allure a deeply considered account of the words. And then, there is the role that is anything but ‘small’. Peter Seiffert attempted the impossible and came off with credit. So many singers are so unequal to the task that one steels oneself the moment a Tristan comes on stage, but Seiffert had the stamina and, by and large, the technical resources. It was a somewhat generalised portrayal, but within its own parameters it worked. What was odd, though, was the number of verbal lapses, when Seiffert sang words that perhaps rhymed with what they should have been or bore some other similarity. Unfortunately – or perhaps fortunately – I cannot recall precise examples, but there was too much violence to verbal meaning for comfort, let alone for Wagner’s ‘perfectly good’ performance. Yet, in many other respects, the present performance came close. What a wonderful conclusion to the Staatsoper’s 2010 Festtage!
Posted by Mark Berry at 8:57 pm