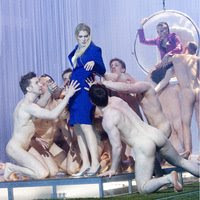 (sung in German, as Armida)

Gluck regarded Armide as ‘perhaps the best of my works’. Posterity seems less to have disagreed than disregarded, for revivals have been sporadic at best. For some reason, or perhaps none, the mid-1840s might have been its most favoured era. Meyerbeer conducted the work in Berlin (at the Staatsoper) in 1843, the same year that Wagner conducted it in Dresden, with Wilhelmine Schröder-Devrient in the title role. Berlioz would conduct the third act the following year, in a typically extravagant performance involving nine hundred performers. (Whatever must that have sounded like?!) Toscanini clearly believed in Armide too, leading performances in Milan and New York. Riccardo Muti, often – rather misleadingly in my view – seen as Toscanini’s heir, included the work in his Gluck cycle at La Scala. I am not sure that Covent Garden, which has rarely if ever expressed much enthusiasm for the great operatic reformer, has staged Armide since 1928, when Frida Leider sang the title role, although there was a production, directed – ‘controversially’ according to the New Grove dictionary – by Wolf-Siegfried Wagner (son of Wieland), at Spitalfields in 1983. Suffice it to say that the Komische Oper’s enterprise and advocacy are much to be applauded in mounting Armide. Anticipation was further heightened by the example of last year’s triumphant Iphigénie en Tauride and by the choice of Calixto Bieito as director.

However, I should probably have known better. Whilst I admired Bieito’s Don Giovanni for the English National Opera, he really does seem to have become a one-trick pony. In a conversation amongst members of the production team reported in the programme, Bieito said that Armide appealed to him ‘because it is a piece about love. And above all a piece about a woman.’ The only possible response, given what we saw on stage, would be: ‘you could have fooled me’. Everything seems to be about sex, or perhaps there is nothing in the world other than sex. Sometimes, looking at our world, one might think that Bieito has a point. But it seems that, in order to make it, he simply has to become more and more sensationalist. I do not think that I could do more than begin to list the various forms and combinations of what was depicted on stage; nor can I summon up any inclination. It is not prudishness but simply weariness that prevents me. Should gerontophiliac sado-masochism be your thing, you will find it here. Ditto asphyxiation by telephone cord. Straight, gay, transvestite, solitary, couples, groups, master-slave dog relationships, even fun with a snake: roll up, roll up. Poor Renaud’s mild leather fetish seems to render him so very conventional. Perhaps that is the point; if so, it would not have been difficult to come up with a clearer way to make it. The production is blessed with a ready and willing band of nude actors – ‘Die Nackten’ – to carry out whatever the director required of them. And they certainly do, most impressively. Apparently this is all Armide’s fantasy. Or perhaps it is really someone else’s. In any case, it so dominates everything else that it is often difficult to listen to the music, let alone to discern a plot. A great deal of unmusical stage noise shows equally scant regard for Gluck’s score.

What a pity this was, for the musical performance was a fine one. Performance in German rather than the original French changes the nature of what one hears, of course, but this did not trouble me unduly. The orchestra was on excellent form, directed with verve – and only the occasional irritating ‘authenticism’ – by Konrad Junghänel. The ballet music fairly danced – unlike the stage business – whilst the harmonic direction and the myriad of Gluck’s post-Rameau or pre-Berlioz orchestral colours registered with great dramatic force. None of the singers was weak and many were very good indeed. Thomas Ebenstein sang the apparently minor role of the Danish Knight with a noble sureness of purpose that belied anything he was called on to do by his director. Maria Gortsevskaya personified Hatred, as she must, without the slightest hint of vocal grotesquerie. Peter Lodahl presented an impressively subtle Renaud, insofar as he was permitted, reminding me of his fine performance in Iphigénie last season. Had he not been more or less submerged in the ongoing ‘activities’, I suspect that his winning stage presence would have registered more strongly.

And when she was allowed to take centre stage, Maria Bengtsson truly shone as Gluck’s almost psychodramatic heroine. This is her story, even if it is not her fantasy. For when the madness finally subsided at the very end, one could more or less concentrate upon Gluck’s astonishing music. Bengtsson and Junghänel almost made one think of an eighteenth-century Erwartung. If only we had been able to do so earlier on. This ending recognised Armide, if only by default, as perhaps Gluck’s truest tragedy, the work having no deus ex machina as resolution. However, Armide also looks back perhaps more than any of his later works to the tragédies lyriques of Rameau and even Lully, written as it is in five acts, with an intended – loaded word, I know – cornucopia of effects and divertissements, reflecting the provenance of the libretto (seventeenth-century, Philippe Quinault, as set by Lully ninety years previously) rather than of any conscious reversion on the composer’s part. Now there are effects and then there are effects. I have never entertained any great desire to witness exhumation of eighteenth-century stagecraft; yet, my resistance relentlessly ground down by Bieito’s adolescent ‘provocations’, rarely have I come so close. If, however, this production, with its excellent musical performances, brings to greater attention a work that still languishes almost unknown, a greater benefit will nevertheless have been accrued.
Posted by Mark Berry at 12:14 am