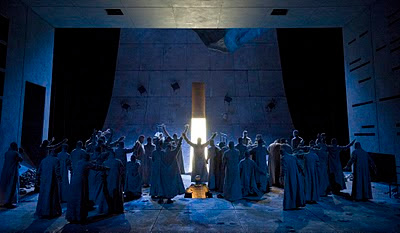 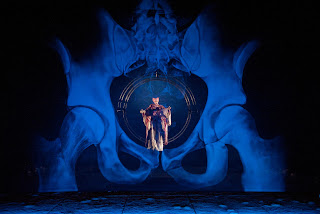 This production retains a special place in my heart: its first outing in 1999 was my first Parsifal in the theatre. Saving up my student pennies, I made the journey not once but twice from Cambridge to London, was mightily impressed the first time and a little irritated the second. Even though I began to harbour doubts about some aspects of Nikolaus Lehnhoff’s production, above all its ending, it remains preferable to many I have seen in the meantime. Stefan Herheim’s astounding Bayreuth version stands in a class of its own. Leaving that aside, however, Lehnhoff is immeasurably superior to, say, the pitiful, incoherent offering from, say, Klaus Michael Grüber for Covent Garden – why on earth did the Royal Opera revive a universally derided non-production? – or Bernd Eichinger’s confused effort for the Berlin State Opera, let alone glimpses of Tony Palmer’s cod-mediævalism for the Mariinsky. Lehnhoff’s conception, powerfully aided by Raimund Bauer’s stage designs, stands very much in the shadow of the Holocaust, taking as a further, generally productive cue the Waste Land’s ‘heap of broken images’. Apposite both to Wagner’s drama ‘in itself’ and to how we may now feel compelled to consider it, we encounter in the first act a community clearly in need of rejuvenation; by the time of the third act, much has turned to rubble and stone, it not being clear until the end whether there should remain any hope at all, even under Parsifal, of that rejuvenation. The second act seems less sure of itself, its abiding images being the bizarre costumes Andrea Schmidt-Futterer allots to Klingsor (weirdly space-age) and Kundry (a strange chrysalis, out of and into which she awkwardly squeezes herself). But compared to the horrors of Grüber’s Covent Garden production, we perhaps should not concern ourselves unduly with that. What the whole lacked, I thought, was more incisive direction on stage, doubtless a consequence of Lehnhoff’s absence through illness: there was more than the occasional hint of a routine ‘revival’, a great pity given the ideas presented.


The broken railway line present during the whole of the third act is a powerful ‘broken image’, presumably intended to refer to Auschwitz. But what is being said there? That the variety of revival offered by the community’s new leader leads to racial rather than Schopenhauerian annihilation? That would be wrong-headed in the extreme, but a point of view at least, yet it seems undercut by the joy with which Kundry – she does not die – and Parsifal begin their journey along the line. The implication seems to be that they are wandering off to initiate a sexual relationship: bewildering, and arguably offensive, in the production’s context. The production, understandably, appears to waver between a quasi-Adornian attempt to ‘rescue’ Wagner and a desire to condemn him. Part of the reason, I suspect, why this conundrum presents itself is the production’s absolute refusal to engage with the work’s complex relationship towards Christianity. (I should direct anyone interested in my thoughts on the latter to an article in The Wagner Journal, 3/3, pp.29-59.) Simply to ignore the issue seems to me an unduly easy way out. And yes, that includes the deflating absence of any substitute for the second-act Sign of the Cross; text and music cry out for something, whatever it might be. 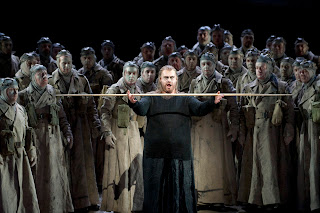 Mark Wigglesworth’s conducting was for the most part something to savour. Parsifal is by any standards a tough proposition, but the structure was largely in place, most impressively of all in the first act, which opened with a beautifully slow yet sustained prelude. The third act occasionally dragged: not a matter of tempo as such, but of faltering line; however, I should not wish to exaggerate. The score’s dialectic between horizontal and vertical demands was more surely navigated than I have often heard. Moreover, the ENO orchestra gave perhaps the finest performance I have ever heard from it; I have certainly never heard it finer. Strings had weight, sweetness, and silkiness, as required, whilst the rounded tone of the brass, sepulchral and never brash, proved exemplary. 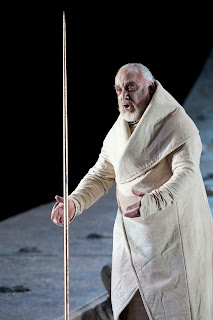 Allowances had to be made for some of the vocal portrayals – and for almost all of Richard Stokes’s English translation. The latter is doubtless an horrendously difficult task to undertake, but some of the inaccuracies – why change a gander to a ‘duckling’, making nonsense of the relationship to a goose? – and banalities could surely have been improved upon. Choral singing was generally very good. Jane Dutton’s Kundry was sadly below par; one could only regret the absence, owing to ‘artistic differences’, of the originally advertised Iréne Theorin. Sir John Tomlinson’s voice is becoming increasingly threadbare at the top, but there was no denying the overall majesty of his Gurnemanz, however impoverished the great narrations may have been by the act of translation. Iain Paterson had a slightly shaky start as Amfortas, but recovered well, soon erasing unfortunate memories of his bizarre miscasting by ENO as Don Giovanni; here, instead, we had a typically detailed response to text and music, and a credible dramatic assumption, for the most part finely acted on stage. Tom Fox and Andrew Greenan made their respective marks without blemish as Klingsor and Titurel, both rising vocally above the handicap of their strange costumes. Stuart Skelton displayed a fine Heldentenor in the title role, very much in the baritonal, ‘Bayreuth’ tradition. As with many of the best exponents of the role, he left one initially a little disappointed, an apparent disappointment rectified by the appreciation of dramatic strategy: the first act Parsifal should sound somewhat vacant, in order to allow for the extraordinary development the character undergoes. (Even ‘extraordinary’ is to put it mildly.) The voice lacks nothing in power; if anything, the thought occurred that it might have benefited from a larger space.


Indeed, I still wonder whether a theatre other than the Bayreuth Festspielhaus is a suitable venue for staging Parsifal at all: not out of misplaced ‘Bayreuth Idealist’ piety, but rather because other, non-theatrical spaces, from Siena Cathedral to the Tate Modern Turbine Hall, might prove much more appropriate. A work that has so far transcended the narrow horizons of the Italianate opera house – or, in the case of the Coliseum, the music hall! – jars somewhat in such a setting. Whether one considers that jarring productive may be a matter of taste, however, and the problem, such as it is, is not ENO’s alone; far from it.
Posted by Mark Berry at 12:51 pm

Just bought tickets, Mark, based on your review here.

I'm flattered! Do let me know what you think: I shall be very interested to hear.

I must say, as I watched Parsifal and Kundry serenely process along the railway track at the end of the Third Act, their gait reminded me of the national rail employees I saw inspecting the suburban line from the window of my delayed service only that morning.

Was this, buckled, decayed Eisenbahn a reference to our own loco(e)motive times? Are we not also waiting for a pious, perfect fool to redeem the sins of our political class and save us?

I must disagree about the production's setting jarring - Frank Matcham's cathedral to classical civilisation added grandeur and sincerity - albeit with a pagan urgency not presence in some venues.