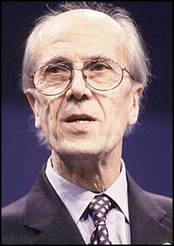 For the (dubious) benefit of overseas readers, who may until now have been living in blissful ignorance of Lord Tebbit of Chingford, his reappearance on the British political stage might prove, short of Margaret Thatcher’s resurrection, the ultimate in ‘80s retro. Notorious for stances that threatened to make the Prime Minister herself resemble a woolly-minded liberal – his advice to the unemployed was that they should follow his father’s lead, getting on their bikes to find some work, and he suggested a ‘cricket test’ for immigrants, to assess their loyalty on the basis of which team they supported – he seems more recently to have become obsessed with homosexuality, to the extent that a friend of mine suggested he should consider seeking asylum in Iran or Saudi Arabia. (The idea of him as the Abu Qatada of Teheran is not entirely without its amusing side.) He certainly has longstanding form, having written to The Daily Telegraph in 1998, perturbed that gay men might do each quasi-Freemasonic ‘favours’, were they to be permitted to attain political office. His latest intervention, an interview with The Big Issue reported today (click here) has as its context a failed bid by the extreme Right of the Conservative Party to derail legislation to enable gay marriage; Tebbit now finds himself exercised by the possibility of a lesbian queen who might have an artificially inseminated heir. Other interesting light is cast upon his subconscious by his concern that gay marriage might lead to his marrying his son in order to avoid inheritance tax. (If I were Tebbit Jr, I should probably now be in the departures lounge, nervously consulting my wristwatch.)

On the eve of Wagner’s 200th birthday, I wondered initially whether this story might draw a few threads together. Might we out Tebbit as a Wagnerian? Had he simply been listening to too much of Die Walküre (see the clip below for Siegmund and Sieglinde, brother and sister, declaring their love for each other, the curtain falling just in time to spare too many Chingford blushes.)

But alas, not. I reminded myself that in the world of Tebbit, the issue is about inheritance. He does not seem so much as to consider the possibility that some of those gay couples might wish to marry out of love. One might claim Wagnerian influence in that respect too; Wagner was at best ambivalent concerning marriage, arguing rightly, in Proudhonian fashion, that it was little more than an instantiation of bourgeois property relations, and having his Jesus of Nazareth stand as a liberator of mankind – and womankind – from all such constraints to human flourishing. Inheritance – ‘the world’s inheritance’ of the Ring and the Ring’s ring – is equally deadly. Yet in Die Walküre, Wagner straightforwardly offers us a portrayal of two human beings who fall in love, unconcerned with society’s judgement upon them, unconcerned even by the discovery that they are brother and sister. Their love, of the moment, refusing to be set in stone either by the runes of Wotan’s spear of law or Fricka’s dead hand of custom, defies bourgeois marriage, yet not after the fashion of Norman Tebbit’s Thatcherite reduction of all to financial and contractual concerns; quite the opposite. Now it may well be, as Wagner's intellectual development tends to suggest, that the hopes placed by many in love are illusory, that we should do better to attend to Schopenhauer than to Feuerbach, and that marriage may certainly not prove to be the best way forward for anyone of any sexual orientation; Brünnhilde belief that she is married, cruelly symbolised by the ring itself, does her and Siegfried no good at all. But Wagner points to renunciation; he certainly does not suggest that we retreat to a world of loveless marriages, such as those of Sieglinde to Hunding, or others conducted purely for reasons of inheritance. Wagner’s relevance? (Wagners Aktualität, as an essay by Adorno has it.) It has never been stronger.
Posted by Mark Berry at 1:30 pm

A serious subject but perhaps the funniest thing you have ever written. I was especially enamored by "Tebbit now finds himself exercised by the possibility of a lesbian queen who might have an artificially inseminated heir. Other interesting light is cast upon his subconscious by his concern that gay marriage might lead to his marrying his son in order to avoid inheritance tax. (If I were Tebbit Jr, I should probably now be in the departures lounge, nervously consulting my wristwatch.) "

Oddly, I meet him, briefly, a few times during the height of his powers. Strangely, not an unlikable person when not discussing his politics. Although, he did resemble his Spitting Image puppet to a degree unmatched by anyone else.

True story. The last time I saw him, not socially, was outside of the River Restaurant of the Savoy - after a rather nice, if overpriced meal. A long story, but as he was walking past, a friend was on their hands and knees at my feet, (all perfectly innocent I hasten to add, although it might not have seemed so depending upon the angle that you viewed it). A rather embarrassed smile, I thought, and he hurried past. Perhaps, his recent obsession is all the fault of that one incident?

I too met him briefly. Strangely, he didn't in the least resemble his Spitting Image caricature. Perhaps verisimilitude is in the eye of the beholder.

Tebbit and Iran in the same sentence reminds me of passing through the British educational system while Section 28 was law, when one would be known to certain peers exclusively by homophobic epithets and yet the effective position of teachers desperately pretending not to hear such things was something akin to "there are no homosexuals in Iran". To now be called "aggressive" by a Conservative Member of Parliament who voted to retain Section 28 frames that irony in a wonderfully absurdist mise en abyme. Not quite but almost as astonishing was a politician from Haider’s faction, who gave a speech to Vienna’s gay community two years after his leader’s death in which he argued that while the party’s rhetoric and policies have been "somewhat homophobic", they were the first political organization in Austria to be led by a [closeted] gay man for 17 years and on that basis had more than earned LGBT support... If only Wagners Aktualität were a little more, well, aktuell.