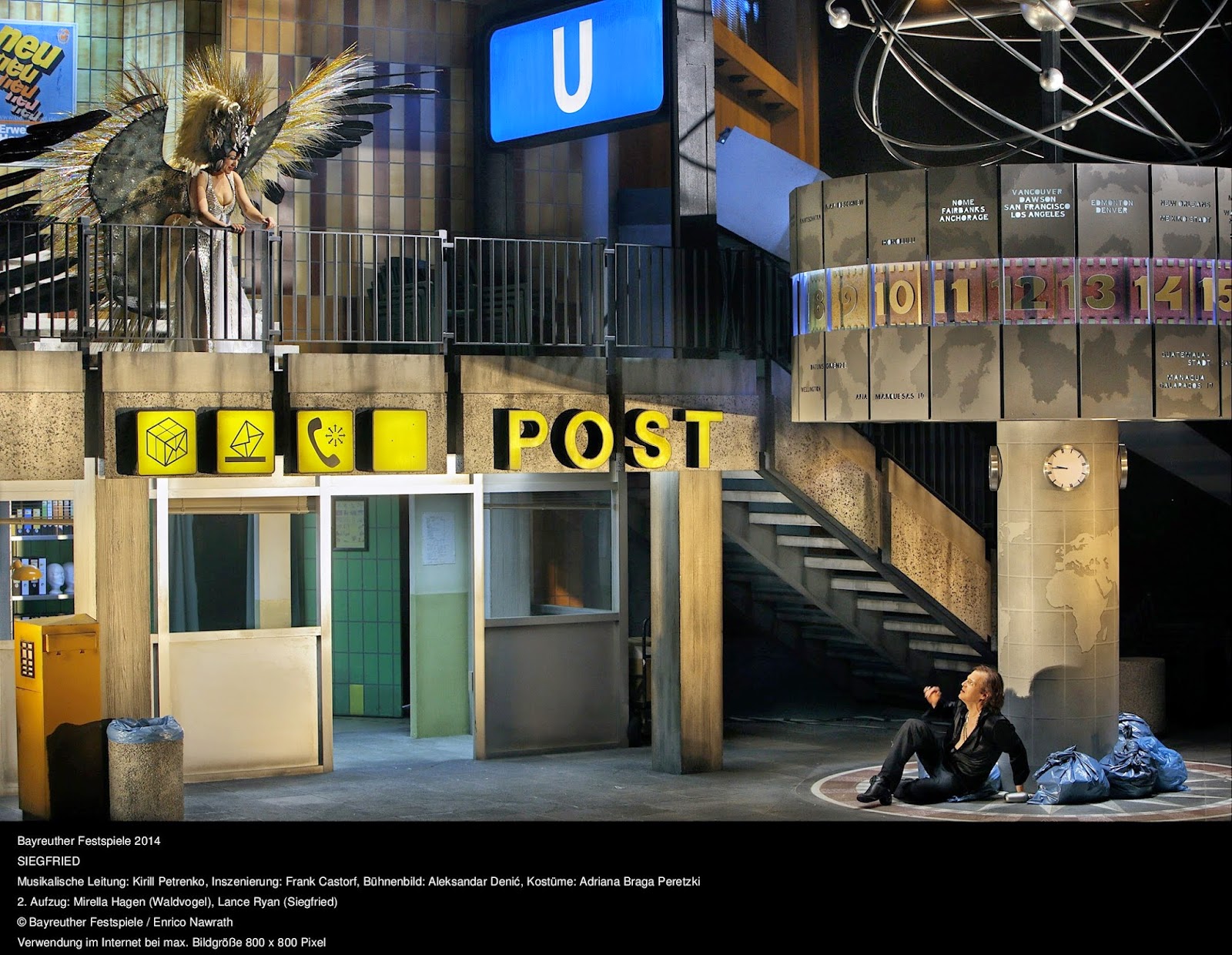 Alas, it seems my tempered enthusiasm, amongst all the frustrations, as experienced in Das Rheingold was very much a case of having jumped the gun. Following a dramatically inert Walküre, this Siegfried hits a new low. Either Frank Castorf is failing catastrophically in what he is trying to do, or what he is trying to do is quite simply inadmissible – or, most likely, I fear, both.


However much incoherence might be trumpeted as an æsthetic principle, that does not make it appropriate to the Ring. Wagner’s intellectual method is rarely if ever Socratic, but it is exploratory, learning from previous ‘answers’ to questions he has asked – the questioning always being the most important thing – and attempting to ask further questions in response to the answers he has found wanting. Ideas overlap, even come into conflict. What his method is not is arbitrary. ‘So what?’ you might ask; ‘why should Castorf, or anyone else, be constrained by Wagner?’ Well, he need not necessarily be, although frankly there is enough in Wagner to keep most of us occupied for several lifetimes. But it does not follow from that that just anything goes. By all means question, criticise, even reject Wagner, but might it not be more fruitful to engage with him in the first instance? And yes, that certainly includes engaging with the music: not as ‘absolute music’, to employ that most ideological of terms as coined – pejoratively – by Wagner himself, but as drama. Castorf’s apparent total lack of interest in the score may be his greatest weakness of all. Whereas Stefan Herheim has said that when words and music come into conflict, he will listen to the music, Castorf seems to have no interest in either. I thought even in Das Rheingold that he would have been far better off offering his own version of the Ring, doubtless cut and interspersed with other material, somewhere other than Bayreuth, perhaps at his own Volksbühne in Berlin. Castorf’s presumable resentment at not being able to rearrange the text manifests itself most often in a disengagement which commits the cardinal sin of being less provocative than straightforwardly boring.


For this staging of Siegfried – or of whatever it is that Castorf has decided to stage – the revolving set alternates between a state-socialist version of Mount Rushmore, its heroes Marx, Lenin, Stalin and Mao a study in decreasing facial hair, and a place claiming to be Berlin’s Alexanderplatz, though certainly not a depiction of any reality I have witnessed there. Considered simply as set designs, Aleksander Denić’s work is stunning; to have what is pretty much a station entrance with surrounding shops created so convincingly is quite an achievement. (I hardly dare imagine the cost!) But Castorf’s direction rarely if ever engages with the locations, let alone with the work. Too often they seem merely to be backdrops, just as the score is reduced to the level of an inappropriate – and, one suspects, for Castorf, a tiresome – soundtrack. 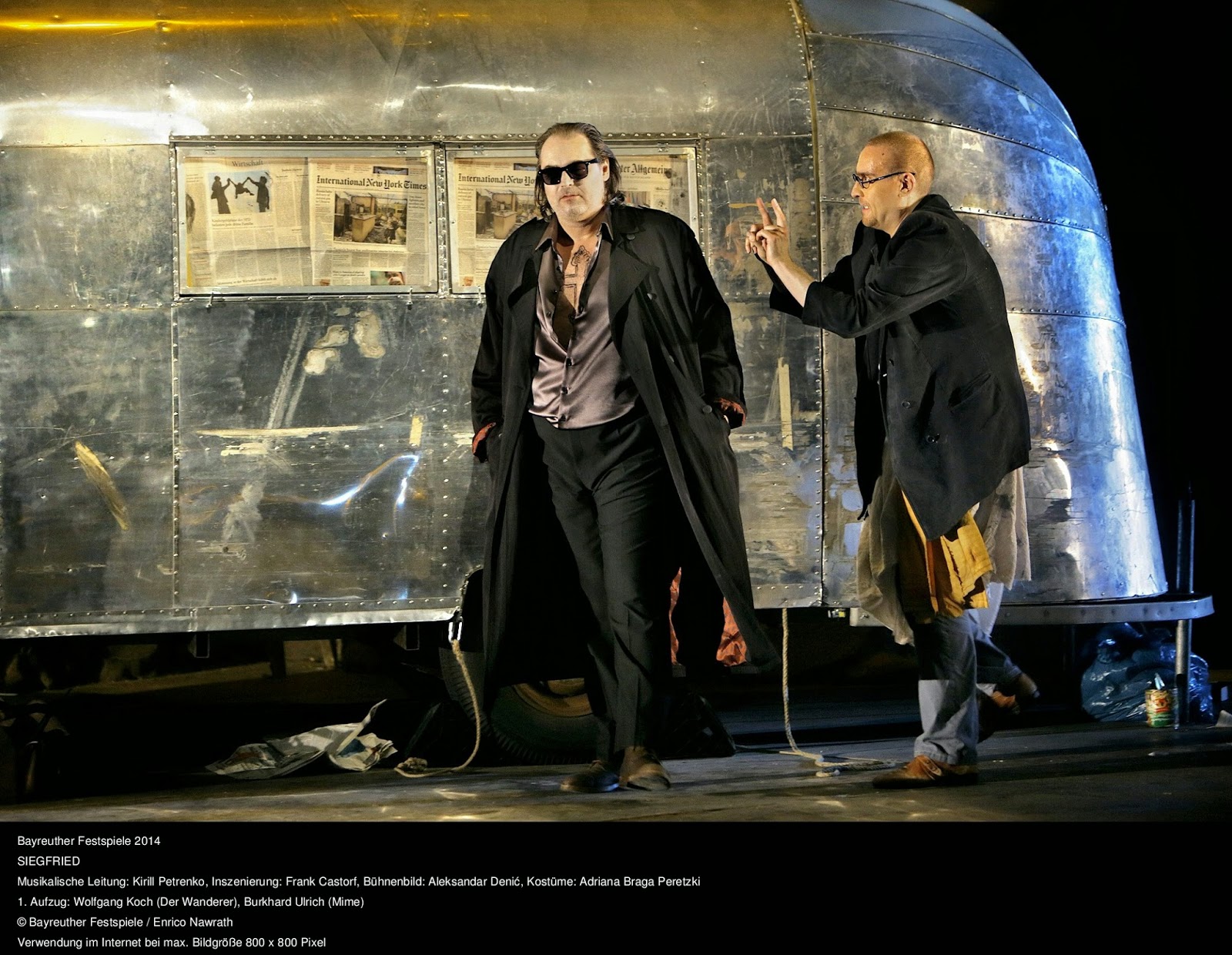 Mime lives or at least works in a trailer van at the foot of the mountain, and that is where the first act unfolds. Our friend the actor – previously the barman in Das Rheingold, with a good few filmic appearances in Die Walküre – is the bear Siegfried has tethered, except he does not seem to be a bear, since he manages to work as handyman too. (It has now come to my attention that this man, who has a great deal to do, and may well prove the only discernible thread running through this Ring, is Castorf’s assistant, Patric Seibert, which may or may not prove ‘significant’.) Siegfried does not re-forge Notung, since he is holding it in his hand already, but occasionally he bangs on something he does not forge. He will not in any case use it to kill Fafner, who dies in a blaze of deafening machine-gun fire, once again a sign of disrespect for the score. In the second and third acts, it is difficult to discern any particular reasons why some of the scenes take place beneath the heroes of ‘actually existing socialism’ some in Alexanderplatz, some, still more confusingly, in both. A tendency already present in Die Walküre for the drama to descend into a parody of Doctor Who, the same characters – albeit in this case, rather more thinly drawn – reappearing in different locations yet carrying on just as before, becomes even more pronounced in Siegfried. ‘The lack of a coherent location is the point,’ someone will doubtless say; if so, it is not a very good point, to put it mildly, since nothing further is done with it. And that is the problem with so much of what we see, that nothing is developed or even related to anything else. Fifteen hours are too long a time simply to reiterate a nihilistic point that anything and everything is arbitrary. 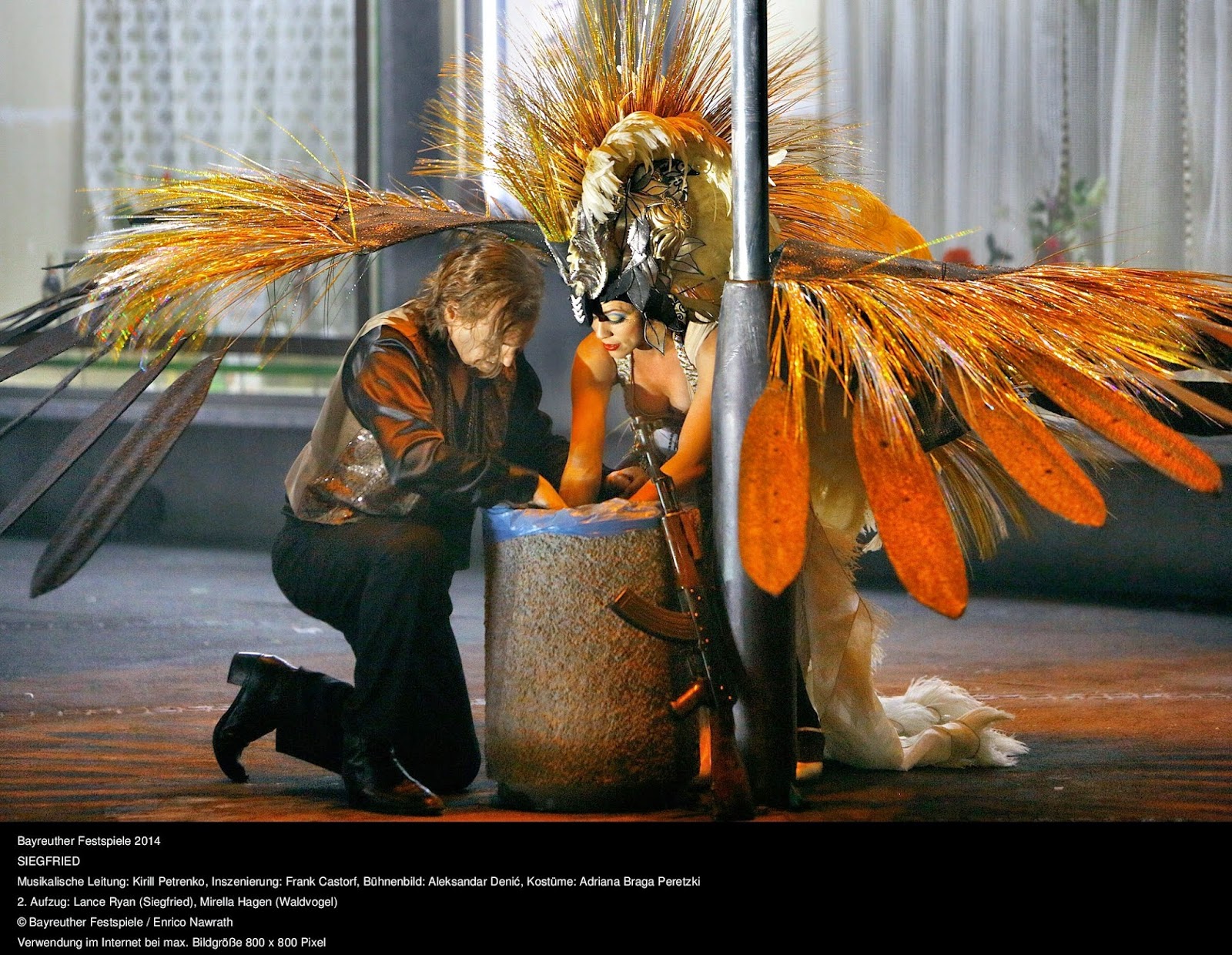 Meanwhile in Alexanderplatz, we witness Siegfried with the Woodbird, her flamboyant get-up more redolent of a Rio de Janeiro carnival. First of all, he fumbles around in a dustbin as a substitute for sharpening his reeds. (The oboe contributions here, whilst superlative in a purely technical sense, are not what Wagner wrote; the idea seems to be that he has some sort of accordion/mouth-organ instead, albeit still played by the oboe.) Later on, at the end of the act, he engages in full sexual congress with the bird, thereby making his ‘discovery’ of Brünnhilde in the third act more or less meaningless. I assume he is being portrayed as a liar, but frankly had long given up caring. Indeed, at the ‘Das ist kein Mann’ moment, so poor is the lighting – a recurring and rather surprising problem here – that, from where I was seated in the Festspielhaus, I could not see Brünnhilde at all. ‘No, it is not a man,’ I thought, since ‘there is nothing there at all.’ There was, but anyway…


In the meantime, we have endured Erda as a sex worker, first of all spending a great deal of time on film with some other women choosing her lipstick, then sharing an Alexanderplatz café meal (waiter: Seibert) with Wotan, for whom we have a charming video close-up of his eating spaghetti. Having thrown a glass of wine over him, she returns and proceeds to maul him, resulting in a filmed blow-job whilst the waiter returns with the bill. (He later showers his staff with banknotes; the Wanderer tips well, it would seem.) That, apparently, is what the peripeteia of the Ring, Wotan’s rejection of Fate, one of the most extraordinarily profound scenes in all world-drama, amounts to chez Castorf. This is not alienating in the sort of post-Brechtian way it seems to think it is; it is, I repeat, just boring. A great deal of other irrelevant business appears on film. What had been an interesting, truly promising device in Rheingold has now descended to the self-indulgent level of a Bill Viola and his tedious ‘Tristan project’. The only relief, albeit somewhat banal, is some rather conventional footage of a horse in a forest: Grane, I presume, though perhaps that would make too much sense. The ending – in which crocodiles wander around Alexanderplatz, Brünnhilde sticking a table umbrella into one of their mouths, a woman (the Woodbird shorn of her wings, I think) climbing inside another, only to climb back out, briefly renew proceedings with Siegfried, only to be pushed aside by Brünnhilde – is something for which I have yet to develop appropriate vocabulary. 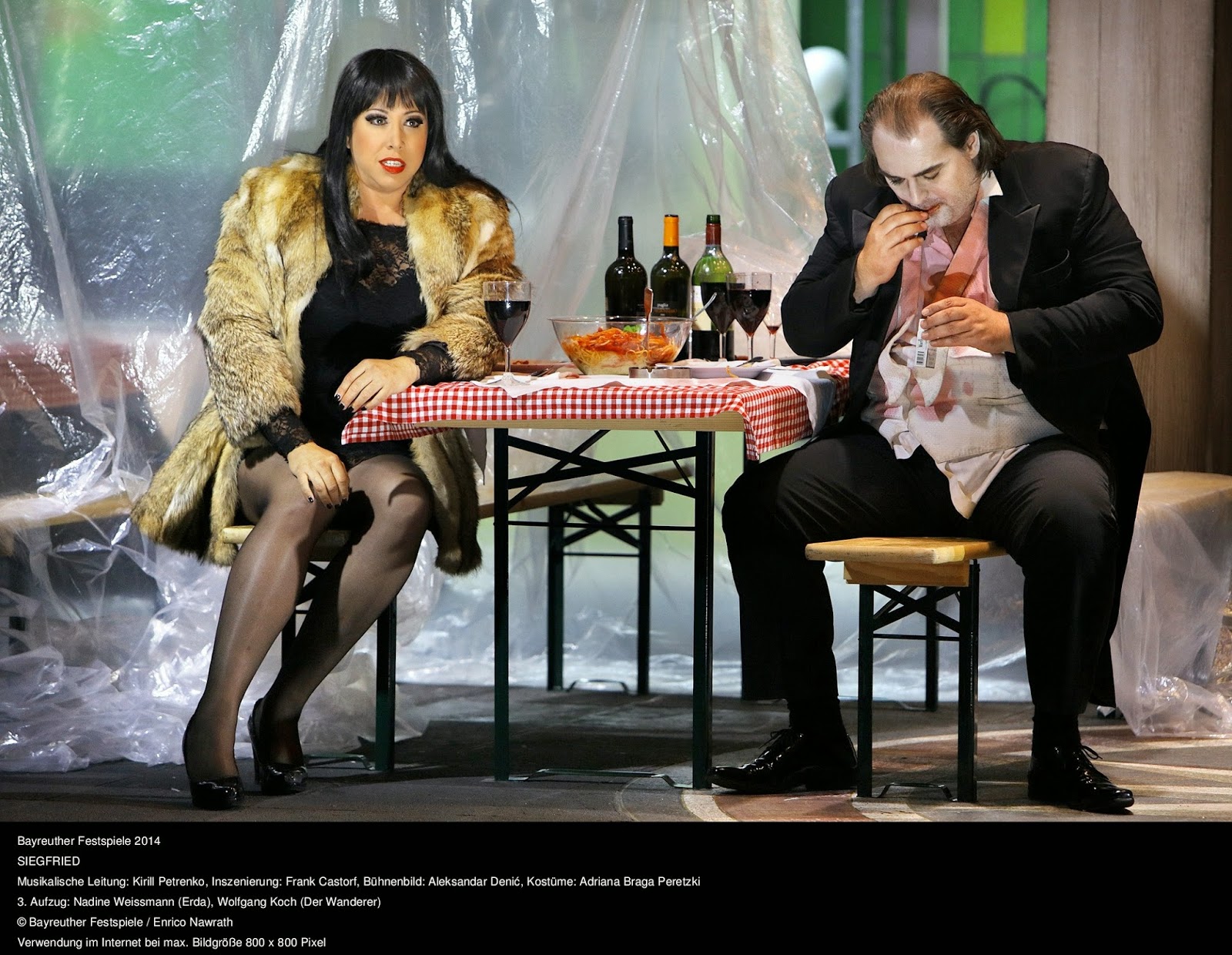 Kirill Petrenko repeated his good work from Die Walküre, a great improvement upon his peremptory, straitjacketed Rheingold. This is not the well-nigh all-encompassing Wagner of a Barenboim – though in a sense, how could it be, with Castorf plying his wares on stage? There was a good sense of line and, again, a still finer sense of dynamic contrast. With the Bayreuth Festival Orchestra on excellent form – such depth in the string tone, such piquancy in the woodwind, such power that yet proves infinitely yielding in the brass – this might well be a Ring worth hearing on the radio. 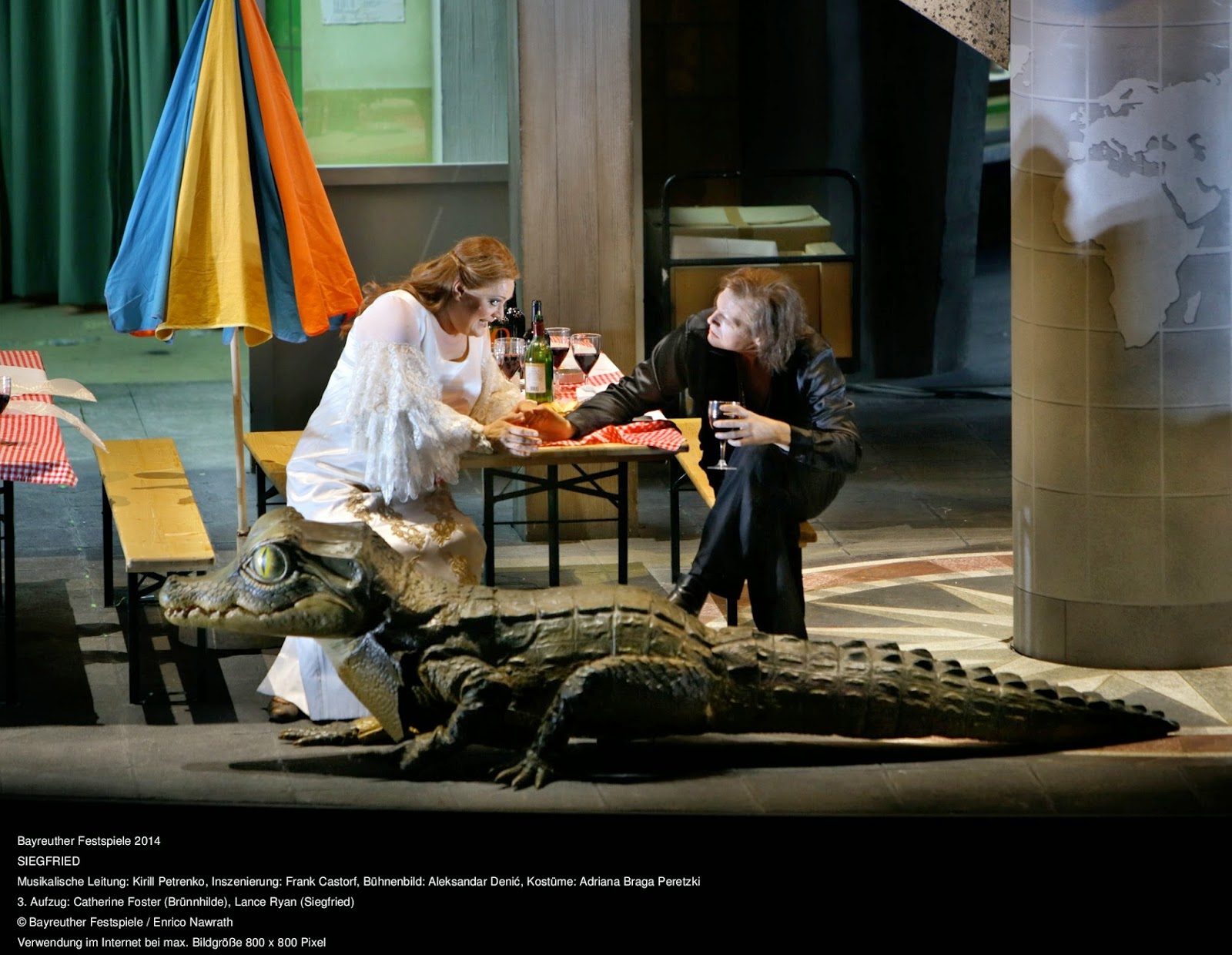 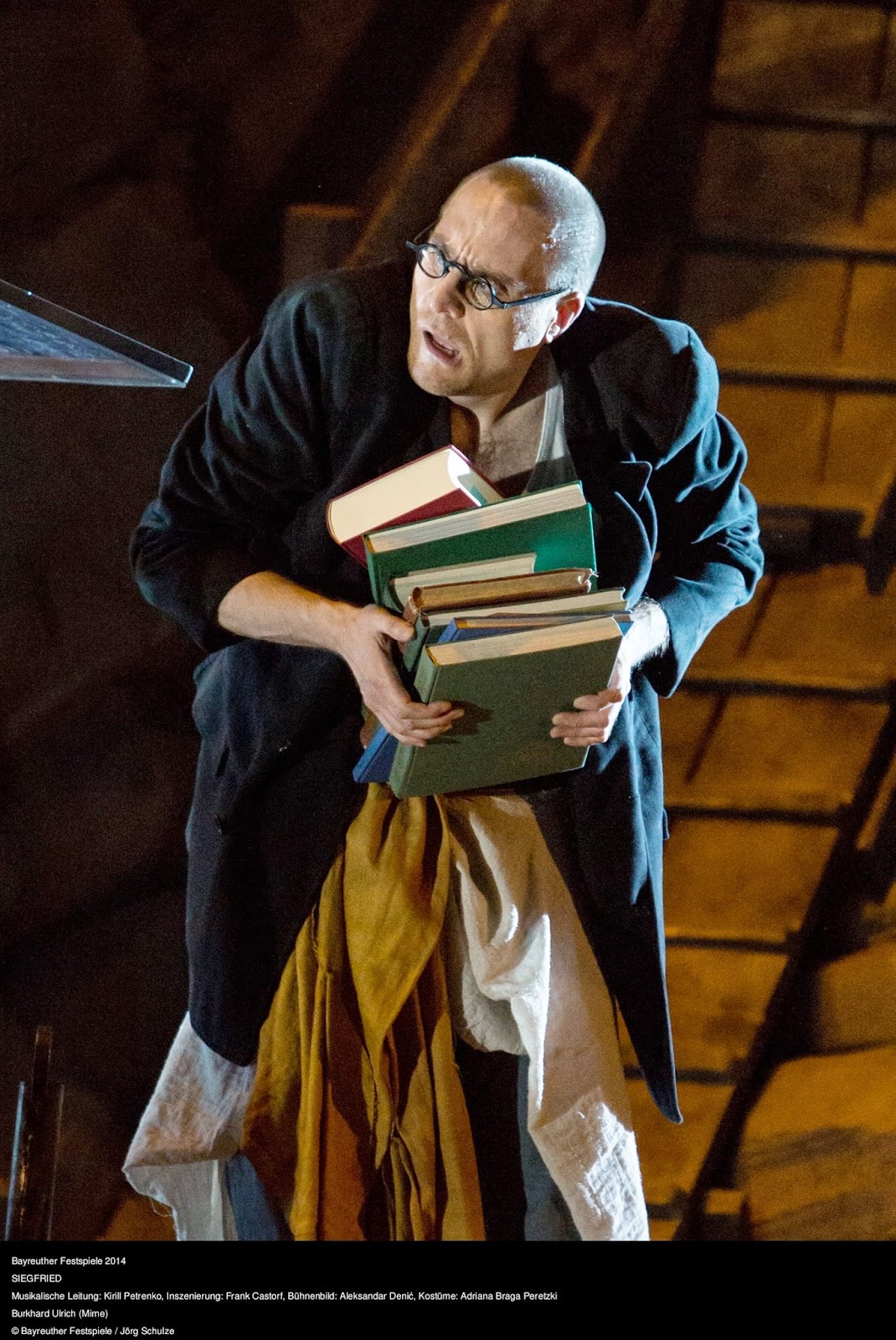 At least, that is, if one can put up with a cast which yet again falls considerably short of what Bayreuth ought to be able to engage. The only member of this evening’s cast who could reasonably be considered world-class was Burkhard Ulrich’s Mime. If he resorted on stage to frequent imitation of Heinz Zednik, then that was doubtless a consequence of the lack of Personenregie. Vocally and verbally, he put Lance Ryan’s shouted Siegfried to shame. One could put up with a bit of vocal roughness, were there discernible interest in the words, but, whatever Ryan’s skill in navigating the crevasses of Mount Rushmore, there was little to detain the ear here.  Catherine Foster’s likeable Brünnhilde remained a positive point, though again, this was hardly Nina Stemme – and, again, Foster seemed overly reliant upon the prompter. Wolfgang Koch’s Wanderer was, within Castorf’s constraints, well-acted and well-enough sung, but tended towards the merely petulant, with none of the wisdom (and darkness of tone) that the role really requires. Oleg Bryjak was booed – bafflingly – as Alberich; he was certainly in the top half of the cast, if nothing out of the ordinary. Sorin Caliban made for a decent enough Fafner, if again nothing memorable. Nadine Weissmann’s Erda was tremulous and – even in vocal terms – lacking in dignity. Mirella Hagen’s Woodbird was straightforwardly inadequate. If this were a cast in a middle-ranking regional house, one would probably think more highly of it. But this is Bayreuth, and deserves better.