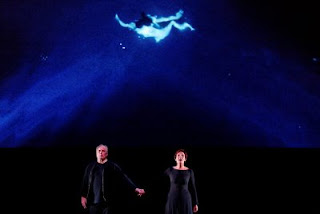 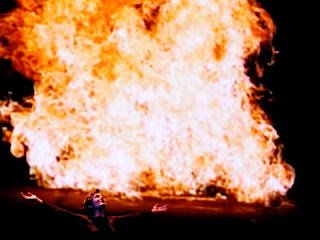 
The third outing for Peter Sellars’s Paris production of Tristan und Isolde is billed as its last. This collaboration with video artist Bill Viola has attracted a great deal of attention, so I was more than a little curious to catch it before it expired – Süß in Duften, or otherwise. Most of that attention has centred upon the production rather than upon the music, and understandably so. Therein lies the problem, for it is Viola’s video images that dominate everything else. This, I suppose, is fine if you are not a devotee of Tristan, of Wagner, nor indeed of great musical drama. As one who, by contrast, would place Tristan second only to Bach’s St Matthew Passion in the musico-dramatic pantheon, I found the result to be fatally compromised.

Distraction is greatest during the first act – and I do not think that this is simply the consequence of greater habituation later on. ‘Act I,’ in Viola’s words, ‘presents the theme of Purification, the universal act of the individual’s preparation for the symbolic sacrifice and death required for the transformation and rebirth of the self.’ As the reader may have guessed, we are in the world of Orientalism – or, as Viola puts it, ‘the Hindu and Buddhist traditions of Tantra that lie submerged in the Western cultural consciousness’. Sellars made him aware of ‘this connection to Eastern sources,’ but the outcome was hardly a drawing into ‘Wagner’s 19th-century work’. For the first act of Tristan is anything but a process of purification; it is a reawakening and a headlong rush into catastrophe. The death that approaches, as understood at this point – and at least to a certain extent throughout – is not sacrificial but the selfish bidding of what Schopenhauer called the Will. Now one can sometimes get away with contradicting the essence of a work – ‘reading against the grain’ as it has tediously become known – but as this act progresses, the video projections of ceremonial purification seem disconnected rather than daringly contradictory. They have the deleterious consequence of distracting from the drama: both that presented, relatively conventionally, by Sellars in almost ‘semi-staged’ fashion, and, most importantly, by the singers and orchestra. There is more congruence in parts at least of the portentously titled second and third acts, ‘The Awakening of the Body of Light,’ and ‘The Dissolution of the Self’. I was rather taken with the forest imagery of the opening scene of the second act, not least since it put me in mind of a genuine ‘connection’, that with Novalis’s Hymnen an die Nacht. And the fire at the end fits well enough with Isolde’s transfiguration – if a little obviously.

Yet there remains too much that was simply superimposition. By all means create a video installation after sources of allegedly ‘Eastern’ inspiration – or perhaps, better, a very occidental fantasy; yet it does not necessarily follow that one should inflict that upon an existing masterwork. A telling phrase in the programme is Viola’s statement that ‘I did not want the images to illustrate or represent the story directly’. As a statement of method this is fair enough up to a point, yet the crucial word there is ‘want’. Should this really be a situation in which one does what one ‘wants’, rather than primarily responding – and one can do this in a myriad of ways – to the work? For in a sense the subject matter of the imagery is the stuff of Californian self-fulfilment. It would be familiar to any observer of ‘New Age’ fads that have reduced the word ‘spirituality’ to a penchant for scented candles. What I suspect many of Viola’s ilk do not appreciate is that the Age of Aquarius is now just as ‘period’ to many of us as the world of Jane Austen. There may be good reason to evoke either; however, evocation itself does not confer instant contemporary validity. There is a self-indulgence here typical of those unwilling to cede the stage to another generation, a generation left with a good number of social, economic, and environmental disasters to address. They must rehearse an old story ‘just one more time’.

I mentioned above the St Matthew Passion, a work with which, as Michael Tanner has observed, Tristan has so much in common. For many of us, a production that treated Tristan as the ‘passion of passion’, in Tanner’s formulation, would potentially have more to tell us than a presentation of superannuated clichés concerning self-fulfilment. The greatness of Tristan is manifold but a crucial aspect is its achievement in representing and involving us in both the ultimate celebration and the ultimate indictment of romantic – or indeed Romantic – love. As ever with Wagner and indeed the German tradition from Schütz to Stockhausen, dialectics are everything, which is part of the reason he could never have done more than take an interest in the very different tradition of Buddhism. His projected drama, Der Sieger, would be subsumed into Parsifal, the remaining Buddhistic-Schopenhauerian themes transmuted into heterodox Christian legend. Development rather than stasis: this is the way Wagner’s mind worked, a working far more complex and rewarding than this production of Tristan would allow.

Semyon Bychkov conducted a fine account of this treacherous score. Notwithstanding the occasional overly-audible gear-change, Bychkov’s reading was characterised by a true understanding of the Wagnerian melos. The orchestral music flowed and surged as the Schopenhauerian Will of which Wagner believed music to be the representation. Bychkov was aided by excellent and on occasion superlative playing from a much underrated orchestra, enabling an uncovering of detailed riches that one is far from always sure to hear. Shimmering strings, magical woodwind, and resounding brass all played their part; so did Bychkov’s ear for balance and subtle highlighting. There were times when I might have wanted a little more muscle but this should not be exaggerated.

Waltraud Meier bade fair to be the performance’s trump card. The odd instance of wild tuning aside, she delivered an eminently musical portrayal. However, the production had the extremely unfortunate consequence of neutralising her abilities as a true stage-animal. I well remember seeing her as Ortrud at Covent Garden. Even during the first act, during which she had almost nothing to sing, so compelling was her stage presence been that I was unable to take my eyes off her. Semi-staged and dominated by video projections, this was not the Tristan for her. Clinton Forbis started unpromisingly, sounding like an old man during the first act. However, in this most impossible of roles, he gained strength and gave a decent account of Tristan’s monologue. Perhaps he had been anxious to conserve his resources. I was disappointed by Franz-Josef Selig’s Marke. This is usually a role in which to excel; although Selig was not bad, he alternated a little too frequently between the emotingly tremulous and the slightly hoarse. I was far more impressed by Alexander Marco-Buhrmester’s subtly ardent Kurwenal, shaping words and music to considerable effect. Ekaterina Gubanova was not always the strongest of Brangänes but at her best, she impressed in a similar fashion to Marco-Buhrmeister. The choral singing, coming from behind rather than on-stage, sounded a little coarse to begin with, when there were worrying lapses in coordination, yet the chorus packed quite a punch by the end of the first act. However, my most unalloyed praise should be given to Bernard Richter and Robert Gleadow in their ‘minor’ roles. I do not think I have ever heard them better taken in the theatre. These artists were distinguished by their verbal acuity and diction, their musical line, and their sweetness of tone. It speaks well of the Opéra National de Paris that effort has been expended on casting these roles; Richter and Gleadow (recently an excellent Masetto at Covent Garden) will clearly go far.
Posted by Mark Berry at 12:38 pm