The Vienna-based Alban Berg Ensemble is hosting its first BERGfrühling (Berg Spring) festival, in Ossiach, home to the Carinthian Music Academy, close to the Berg family estate, aptly enough called the Berghof, where the young Alban would spend his summer holidays. Four out of the five concerts will take place in the CMA’s Alban Berg Saal, a splendid new hall with an excellent acoustic, three with a work by Berg on the programme, the other with a piece by his fellow Schoenberg pupil, Webern; the fifth, a performance of a Dvořák’s G major String Quintet, op.77, will be heard in the parish church of St Georg, in nearby Sternberg. (Whether referring to mountains or composers, the word ‘Berg’ is rarely far away here.)

It was with, Schubert, one of the most indispensable forerunners of the Second Viennese School, that the festival opened, members of the ensemble joined by double bass player Ivan Kitanović for the Trout Quintet. The resonance of that bright A major chord, piano arpeggio included, seemed to announce both ensemble and acoustic in one: as it should be. A cultivated yet clear sound characterised a first movement full of tension, yet never aggressively so, the second group relaxed in the best sense, permitting a further increase of tension to propel us into the serious business of development. Modulations retained, or better revealed, their magic. Harmonic tension built and then exhausted itself, not unlike Mendelssohn, the onset of the recapitulation almost yet not quite imperceptible. A poised, almost chaste Andante sounded in almost neo-Classical style (vis-à-vis Mozart, that is, rather than anything Stravinskian!) It made me listen – and think. And yet, was it not too late for chastity? Such was subtly hinted at too, especially as the movement progressed. A propulsive reading of the scherzo, not without Beethovenian affinities – elective or otherwise – was counterbalanced by a somewhat neutral trio, but perhaps that was the point. 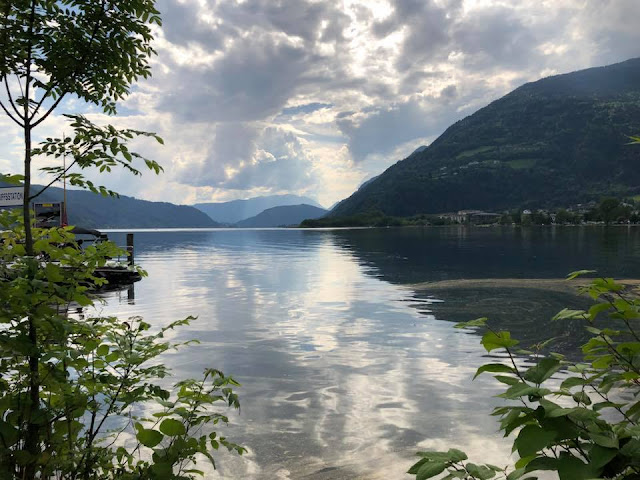 Having seen the wondrous Ossiacher See only that afternoon – the Abbey, now the Academy, stands by the lake – it was especially lovely to welcome the freshwater fish of the fourth movement theme and variations, here characterful, without overstatement. Well seasoned, one might say. There was plenty of time and space left to build, preparing for true vehemence in the minore fourth variation. I loved cellist Florian Berner’s shaping of his melody in the fifth: aristocratic, without aloofness. The final variation took us to the coffee house: where better a place to round off proceedings? The finale seemed, almost likewise, to hint at Brahms, whilst rightly remaining very much of its own time. Our tragedy, as well as its, may well be to be too late for Mozart; yet, as Brahms would counsel, there are sometimes worse things than lateness.

Weber’s trio for flute, cello, and piano, op.63 is an engaging, if sometimes perplexing, oddity. The first movement proved more fantasia- than sonata-like, likewise the finale. It was often not entirely clear what the material was doing where it was, nor how their tonal structure might operate. And yet, even there, there were hints of something darker, more Freischütz-like. The second movement scherzo benefited from nicely sprung rhythms and a pleasing semi-rusticity for its ‘trio’ material. Those two tendencies are more bound together in a single dance – and here, the music certainly danced. A beautifully posed ‘Schäfers Klage’ (‘Shepherd’s Lament’) was the highpoint, subtle in its navigation between Classical and Romantic tendencies – as one must be in Weber, or Schubert for that matter. It is a truly fascinating movement, all the more so in so illuminating a performance as this.

For the final work, we turned to Berg: to the world premiere of Martyn Harry’s arrangement for the ensemble of the composer’s own Fragments from ‘Wozzeck’, echoing the celebrated performances of Schoenberg’s Society for Private Musical Performances. The opening sounded on a knife-edge, between something frozen and molten lava: not unlike Bartók, perhaps. A labyrinth opened up before our ears, making us listen and listen anew, to find our way around something we thought we knew, yet perhaps did not after all. Indeed, for the first two fragments at least, I listened in more ‘abstract’ fashion, less heedful of the plot. Clarinet echoes from Berg’s op.5 Four Pieces led us, via Pierrot lunaire, so it seemed, into a whirling martial vortex: even here, the Captain seemed more an ‘instrumental character’ than reminiscence of a stage performance. The flute sang too, duetting, engaging with other instruments, bringing the ensemble to life – or perhaps to death.

In the second fragment, the viola came to the front: literally, Subin Lee acting as our instrumental Marie. Eloquent, even desperate, she (Marie, the viola, the violist?) remained splendidly collegiate; this was always true chamber music. In some ways, the music’s context within Berg’s instrumental œuvre came to seem clearer, or at least newly, even differently, emphasised. Curiously – in the best sense – enigmatic, it was very much the centre-piece to an aural triptych. Marie confounded us again, or perhaps Berg did, or Harry: surely, in practice as well as in theory, all three did. The drowning music with which the final fragment opens sounded properly hallucinatory, lulling, drawing us in as society draws in future Wozzecks. The ‘D-minor-ness’ of what followed somehow sounded underlined, its richness not quite that of nineteenth-century chamber music: perhaps, rather, of that music remembered, as both cage and liberation for Berg. Alexander Neubauer’s clarinet deputised for the children’s song to follow: childlike or childish? Certainly sardonic. The halt to which the music came chilled, as ever.