Lemieux/OPRF/Petrenko - Takemitsu, Chausson, and Zemlinsky, 4 May 2018 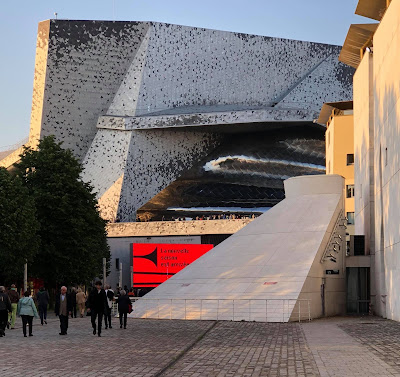 Paris’s now not-quite-so-new Philharmonie remains a thing of wonder. The approach through the Parc de la Villette is a visual feast, especially on a sunny evening such as I was afforded. Lighting works magic after sunset too. If the public areas outside the hall still seem oddly provisional – presumably they are – the hall itself, now named the Grande Salle Pierre Boulez after the conscience of new music, remains also an acoustical wonder, a feast for the ears. I could not help but think, not least after a recent visit to the Barbican, how desperately London needs something similar – or, dare we hope, better. From May in Paris to May in Downing Street remains, alas, a distance of intergalactic proportions. 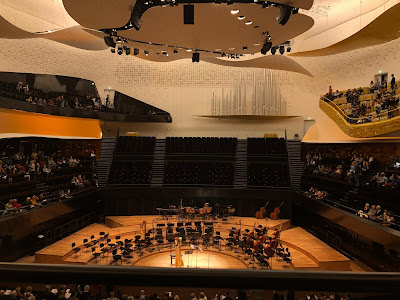 Although I had enjoyed my first visit, in October 2015, this concert proved the more consistently illuminating musical experience. For one thing, I am not sure that I had heard any of the three works in concert before. Takemitsu’s Toward the Sea III, for alto flute and harp, made for an excellent opening piece: the sort of programming touch, mixing solo, chamber, ensemble, and larger forces, of which Boulez would have approved. Flute and harp could hardly be a more Gallic combination, yet Takemitsu’s music is rarely quite what it initially seems. This, then, was a garden of delights, not least the opening movement, ‘The Night’, but not all gardens, not all Japanese gardens, are the same. Such music tends to reward concentrated, enlightened listening – what music worth its salt does not?! – such as was enabled both by these fine performances, from Michel Rousseau and Nicolas Tulliez, and the fine acoustic. There was a sense of inheritance from Debussy and Ravel, without in any sense being limited thereby. Shifting of roles between the two instruments came to the fore in the second movement, ‘Moby Dick’, played with twin flexibility and purpose: both necessary when finding one’s way around a labyrinth, however esmall. The closing ‘Cape Cod’ followed, so it seemed, consequentially, without one ever necessarily being able to explain quite how. Silences proved pregnant, as telling as the notes. There was no playing to the gallery here; neither music nor hall required it.

We remained with the sea throughout the evening, Chausson’s Poème de l’amour et de la mer our next port of call. Like each of the three pieces heard this evening, Chausson’s work is, surely not coincidentally, in three parts, a ravishing orchestral interlude between the two verse settings: ‘La Fleur des eaux’ and ‘La Mort de l’amour’. Many in the audience were, understandably, disappointed by the withdrawal of Anna Caterina Antonacci from the concert. There was, however, little to regret in the performance we heard from Marie-Nicole Lemieux. Indeed, her rich yet agile contralto offered its own distinctive rewards, which one would have been a fool to spurn. (How often, in any case, does one have the opportunity to hear a ‘true’ contralto?) Her way with the words was impressed just as much as the richly upholstered tone on the low notes.

Rousseau and Tulliez were now joined by their colleagues from the Orchestre Philharmonique de Radio France and Vasily Petrenko. I was struck – perhaps as an Englishman I would be – by the opening phrase and its seeming affinity to Elgar. Tristan-esque harmonies made their mark, of course, so did the Klingsor-like, fin-de-siècle world of the ‘sauvage’ we both heard and embraced. Chamber music, as in Wagner, proved to be much of the story too, Petrenko acting as much as enabler as director, without shirking his responsibilities in the latter role where necessary. Greater urgency in the third section marked out a fresh start: related, yes, but also perhaps redolent of Nietzsche, in The Gay Science: ‘At long last the horizon appears free to us again, even if it should not be bright; at long last our ships may venture out again, venture out to face any danger; all the daring of the lover of knowledge is permitted again; the sea, our sea, lies open again; perhaps there has never yet been such an ‘open sea’. Wagnerism knows no boundaries; nor should it.

Zemlinsky would surely have nodded assent to that, whether as composer or conductor. Petrenko’s reading of Die Seejungfrau (‘The Little Mermaid’), after Hans Christian Andersen, at least equalled any recorded performance I have heard – with the inestimable advantage, of course, of ‘liveness’. When I hear it I cannot help but think of Schoenberg’s Pelleas und Melisande, not least since both works received their premieres in the same concert, the final, January 1905 outing for the short-lived Vereinigung schaffender Tonkünstler (‘Society of Creative Musicians’). Neither is an easy work to bring off, yet Petrenko seemed to me very much to have the measure of Zemlinsky’s ‘fantasy in three movements for large orchestra’, especially its very own motivic integrity: not entirely unlike Schoenberg’s, yet certainly not merely to be assimilated to it.

Through that joint inheritance from Brahms and Wagner, the three movements seemed quite naturally, even organically – however loaded those terms may be – to emerge. Would it have mattered if it had been called a symphony? Perhaps not. But it was better called, and performed as, something else. The narrative was very much its own, perhaps not entirely unlike another, more celebrated maritime symphonic poem, by a composer hovering at the edges of the programme: Debussy. The waves of La Mer certainly came involuntarily to my mind at the opening of the second of the work’s three movements. Thinking of the symphonic or tone poem as a genre, work and performance sounded not un-Straussian at some points, yet never – quite rightly, I think – displayed Strauss’s cynical and/or materialist delight in phantasmagoria for its own sake. Zemlinsky, for better or worse, was simply too nice a man and composer for that. He withdrew the work, for whatever reason, after that Musikverein performance. Schoenberg, as ever, bore the violent brunt of the reaction. ‘Reviews were unusually violent,’ he would recall: ‘one of the critics suggested to put me in an asylum and keep music paper out of my reach’. Zemlinsky, however, deserved far more than indifference – as Schoenberg and this evening’s excellent performers knew well.