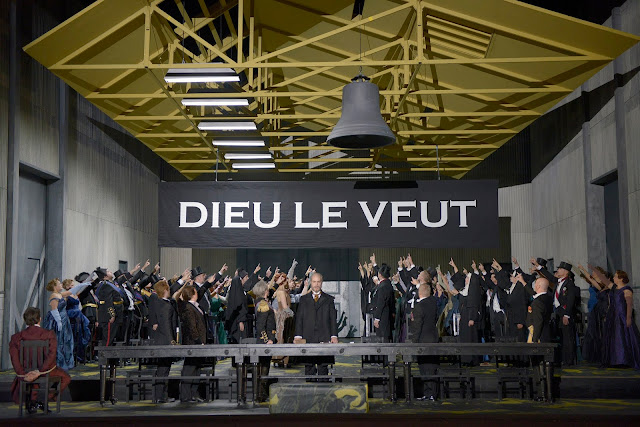 The Meyerbeer enigma – or enigmas: will they ever be solved? Shall we ever even agree what they might be? There remains, at least for me, an object of fascination in the phenomenon itself, not that I could be sure of telling you what it is. A certain variety of cynic will doubtless lay into Wagner at this point. People always do, of course. (It makes a change from Jeremy Corbyn.) However, on returning to Wagner’s description in Oper und Drama, I suspect that he came closer than most: ‘a monstrously coloured, historico-romantic, devilish-religious, sanctimonious-lascivious, risqué-sacred, saucy-mysterious, sentimental-swindling, dramatic farrago’. (It sounds better/worse in German: ‘ein ungeheuer buntscheckiges, historisch-romantisches, teuflisch-religiöses, bigot-wollüstiges, frivol-heiliges, geheimnisvoll-freches, sentimental-gaunerisches, dramatisches Allerlei’.) Either that, or Wagner transformed our understanding of musical drama so much as to render it well-nigh impossible for us to hear this bizarre, often incomprehensible music otherwise. 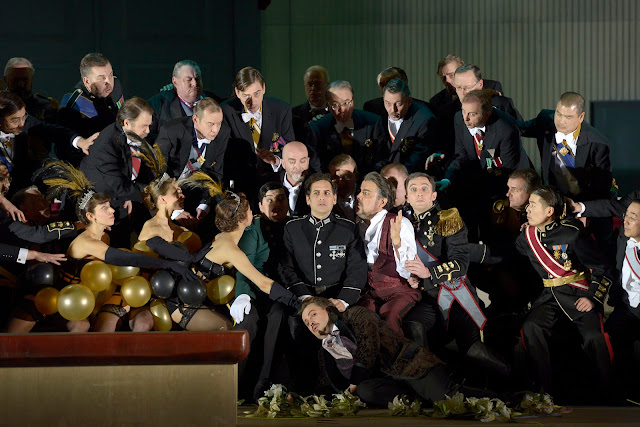 There is, I suspect many will agree, a particular problem concerning how to stage a work such as Les Huguenots for a modern audience. I was inclined to give David Alden the benefit of the doubt for quite some time. Not only have I admired several other Alden productions, but this also shows some sign of recognising that there was a problem and of attempting to address it. Or does it? Part of the way through, I was as bewildered by what was going on visually as I was by what was happening – I think that is the word – aurally. The opera seems somewhat carelessly updated to the nineteenth century, to no particular end, though perhaps with no particular loss either. The period comes across as too late to coincide with the time of composition: more Second Empire than July Monarchy, though perhaps I am misunderstanding. Indeed, it comes across as having been chosen more for its ‘look’ and for the strange interpolation of big-house Offenbach dance numbers, ultimately more vulgar than ironic, than anything else. Little or no attempt is made to accommodate the action to its new setting. One gains no sense of a framing, nineteenth-century glance back towards the sixteenth century, let alone of equivalents being found. As to who these people are, what they are doing, how one might react to them: who knows? 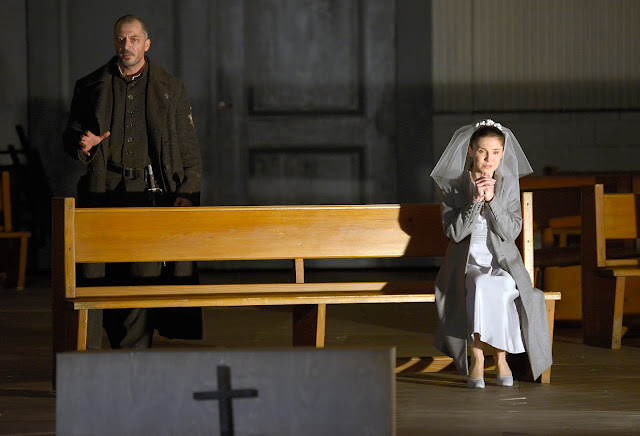 The third act offers a case in point. Confusingly, everything here appears to take place in whatever it is the Pré-aux-clercs has become: more suggestive of a Calvinist church to start with, although ecclesiology, let alone theology, seems even less on Alden’s mind than Meyerbeer’s. Characters are regularly pushed onstage astride large horse statues, the frequency of such arrivals presumably reflecting a desire to attain better value for whatever they must have cost. The idea of spectacle is certainly worth playing with, but here there is not enough spectacle, let alone idea. If you like seeing fire onstage, then the denouement will be for you, but only if you have never seen it accomplished with greater spectacle. Throughout a dance, a blow job, a round of champagne, some other such staple, or a combination of the above will occur when nothing else immediately suggests itself. Why the archer du guet, a sort of royal nightwatchman, appears as a wraith I simply have no idea. Having wondered what Alden might make of his claim in the programme booklet that, to a twenty-first-century audience Meyerbeer’s operas can seem ‘with their collage technique ironic, cool, and postmodern’, I can only really say nice try; or rather, more of an actual attempt would have been welcome. If the idea were to reflect the messy dramaturgy, if one can even call it that, of Meyerbeer’s opera, then it needed framing better than this. Any unhappy coincidence, however, was more likely to have been just that.

I can imagine a conductor bringing more to the material, making more of it, than Alexander Vedernikov. Perhaps there is no ‘whole’ to give a sense of here; if so, discontinuity would be better off coming across as an aesthetic choice – difficult, yet far from impossible – rather than a mere default option. Orchestra and chorus alike sounded less than inspired, at times ragged and uncertain. There is doubtless little that can be done about the interminable quality of certain arias; nor about the composer’s seeming inability to bring them to a close when he finally makes the attempt; nor about the weirdly unfinished nature of many of them, as if Meyerbeer had sketched a vocal line and obbligato instrumental solo and been in too much of a rush to add the rest. Perhaps he was. If so, though, why has anyone ever taken this music to heart, as many would genuinely seem to have done? Cutting would probably not have helped. A viola d’amore staying more or less in tune throughout its ‘star’ moment – here taken onstage – surely would. 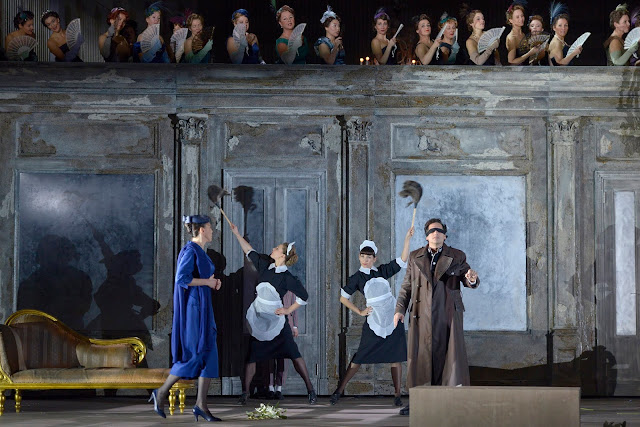 As for solo singing, it was a mixed bag. French pronunciation, let alone style, was rarely a strength. No one should argue for casting on nationalistic or even national grounds; I could nevertheless not help but wonder whether the presence of a French singer or two would have helped. As it was, female singers tended to fare better than their male counterparts. Liv Redpath’s light, clear soprano, often somewhat instrumental in tone, was granted ample opportunity to shine, opportunity well grasped. If her melodies and those of others remained obstinately unmemorable, when indeed they cohered at all, fault for that lies elsewhere. Irene Roberts, as the page Urbain, offered finely honed complement and contrast. If Anton Rositskiy’s Raoul proved somewhat rough-hewn, the tenor offered staying power and a winning ardency. Olesya Golovneva’s heartfelt Valentine sounded more genuine than any of the writing itself, and was all the more welcome for it. Dimitris Tiliakos impressed too, as a suave, clean-toned Comte de Nevers.

This remained, however, a baffling evening, in which little of the interest of the composer's own Robert le Diable, let alone of another, immeasurably superior composer's Rienzi, was to be discerned. Why Meyerbeer? I have considerably less idea than I did before.