Though recollection has proved more diverting than direct theatrical experience, I doubt I shall forget Rodrigo García’s Entführung aus dem Serail in a hurry. Of the five productions I have seen live, three (Elijah Moshinsky, David McVicar, and John Copley) fall into the category of trivial, unreflective Orientalism; one into that of recreative genius (Stefan Herheim) such as will appear only rarely in one’s life; and one now into a further category which, whatever it lacked in Orientalism was certainly made up for in triviality and lack of reflection. One way to deal with problematic aspects of any ‘clash of civilisations’ is to remove anything much in the way of clash, let alone of civilisation. With Garcia’s staging, Mozart’s score becomes at best an eccentric film track, unheeded and unheedable, to a hodgepodge whose themes might conceivably have offered a starting point to a production, but which are so carelessly presented and undeveloped that they come across more as a tired and tedious attempt at provocation than anything more serious, let alone coherent. 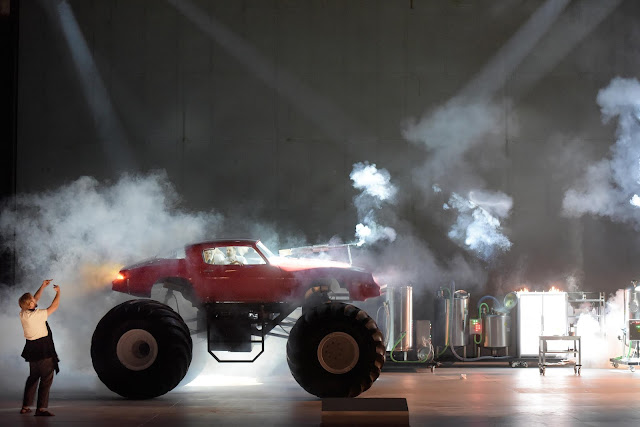 The Overture is accompanied by filmed footage of an American roadtrip; my apologies, an American roadtrip is accompanied by some randomly selected music by Mozart. It is full of ‘hilarious’ events – well, viewed as hilarious by certain members of audience – such as someone smoking and the smoke filling in the car; and, needless to say, people dressing and undressing. Those people are Belmonte, Konstanze, and Blonde, to whose earlier antics, presented bureaucratically in each combination and permutation, we are treated a little later on a prolonged soft porn film. (During that ‘treat’, someone takes down a small wall portrait of Mozart and places it under the covers, cueing further, prolonged hysterical laughter.) Pedrillo, as you may have noted, is not with the travellers. However, he pops up soon enough on film, drinking in a bar with Konstanze (I think, though it may have been Blonde), and a little later on stage, replacing Konstanze and Blonde. Throughout, we gain the strong impression that the director would have been happier presenting everything on film and leaving the opera stage well alone; the stage would surely have responded in kind. In case we were wondering why those characters were now in different places, Belmonte remaining (for now) in his ‘monster truck’ – familiar, apparently, to habitués of US light entertainment – we see, following repeated, oh-so-daring exclamations of ‘fuck’, further film footage in which Pedrillo, Konstanze, and Blonde are taken up by beams issued from a flying saucer, presumably transported thereafter to wherever they happen to be now. 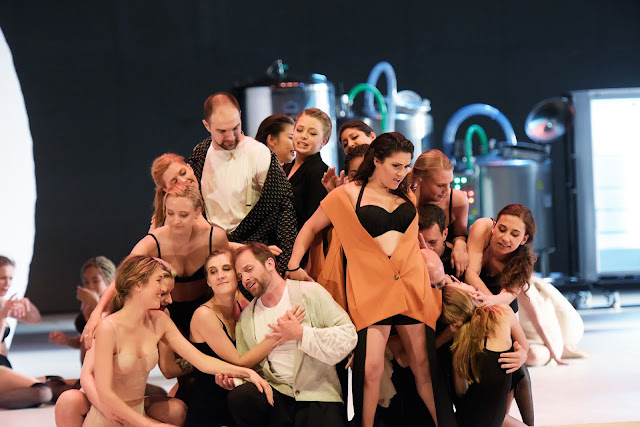 None of it makes any sense, nor does it seem to make any real point about incoherence. Most of the dialogue is reimagined – let us be charitable – by Garcia in (US) English, though some is in German and odd words appear in French. Bassa Selim has become a woman basketball player, whose sponsorship deals are shown – you guessed it – on film, with such inspired transformation as an Adidas logo with ‘Bassa’ substituted for ‘Adidas’ and a Shell logo with ‘Selim’ substituted for ‘Shell’. Poor Annabelle Mandeng, a fine actress, keeping a commendably straight face, delivers material such as this to Konstanze (reproduced from the programme): ‘Love Love Love in my pussy Storm storm storm in my pussy/Love Storm love storm Love Storm love storm in my anus/Sex in my eyes Love in my anus Storm in my mind/Sex in my eyes Love in my anus Storm in my mind/Love in my clitoris Sex in my mind Storm in my anus/pussy pussy pussy pussy in my brain…’ Konstanze shouts ‘Crazy!’ a little later. Perhaps – although to my mind, or to whatever remained of it by this point, ‘crazy’ was unduly to dignify such moronic drivel. 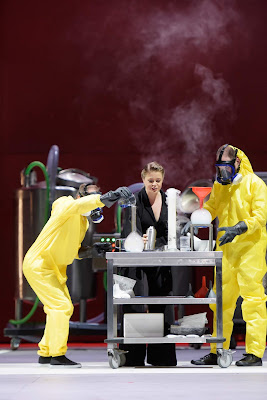 Who were these people? There was no indication, still less interest, although towards the end Belmonte claimed that his father was richer than Donald Trump. Had the drugs – yes, surely you must have guessed there would be drugs – come around earlier, one might have ascribed everything to their influence. Perhaps that was the point, that anything people do while under the influence is unspeakably tedious to anyone else and probably to them too. If so, perhaps Garcia would like to make a film about it; but then that would not provoke, or cost so much money. We saw some crystal meth paraphernalia wheeled on, though, so that was daring, and also, naturally, lots of additional people wandered around – there was little in the way of Personenregie – in various states of undress. Cartoon characters came and went. Oh, and of course, our ‘monster truck’ was driven around a little more onstage, while further film footage was played. There were a few explosions at the end, perhaps to wake up those who, inexplicably, had been neither mentally nor physically aroused. I am sure the goings-on will have offended those they were intended to offend; as for me, I wished I had stayed at home to listen to the Staatskapelle Dresden, Karl Böhm, and company. 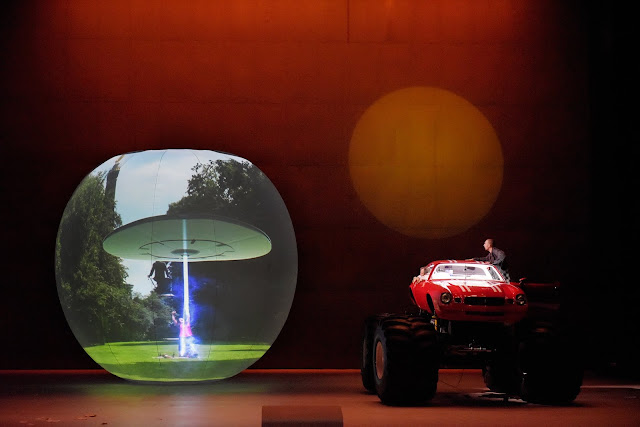 For a vintage orchestral evening it certainly was not. Conductor Nicholas Milton seemed determined to treat Mozart like Rossini, harried, hurried, and little else – save for when he engaged arbitrarily in pulling the score around, as if he had suddenly been told to inject a little imitation Harnoncourt into proceedings. (For what it is worth, Harnoncourt quite rightly loathed conducting that had Mozart reduced to Rossini.) The orchestra sounded at best as if it were going through the motions, and frankly who could blame it? Perhaps it was a reading intended to complement the shallowness onstage, but somehow I doubt it. Singing, thank goodness, fared better; as, to be fair, did the excellent work of the Deutsche Oper’s Statisterie. Bass Patrick Guetti stole the show as Osmin, in a committed performance as thoughtful as it was virile. Matthew Newlin’s sweet-toned Belmonte and Gloria Rehm’s spirited Blonde almost impressed. If intonation from the other two singers sometimes left a little to be desired, I suspect it would be fairer to assess their contributions in a better production. At any rate, I am unlikely to return to this.