All music once was new: uncontroversial statement, one might have thought, however much one sometimes imagines having heard its particular strains before. ‘Es klang so alt und war doch so neu!’ as Hans Sachs muses to Walther of the latter’s melody. New music needs, after all, to be performed if not as if it were old music, then with at least as much commitment and understanding, both ‘in itself’ and of whence it has come. A celebrated concert, entirely Beethoven’s music, with no fewer than four world premieres, took place on 22 December 1808 at the Theater an der Wien, Beethoven both playing and conducting. How might we have heard it? We can never know – and probably should not want to, not least on account of what seems, given but a single rehearsal, to have been an unsurprisingly poor orchestral performance. We faint-hearted would-be-modernists can only marvel, however, at a programme that ran: Symphony no.6 (premiere); Ah, perfido; Mass in C major, ‘Gloria’; Piano Concerto no.4 (premiere); Symphony no.5 (premiere); Mass in C major, ‘Sanctus and Benedictus’; solo piano improvisation; Choral Fantasia (premiere).

There have been occasional repetitions of the programme of this particular ‘academy concert’, which experience will of course be entirely different from that of its first audience. Cologne, however, has presented something quite different for the composer’s anniversary year, a ‘new Beethoven Academy’, entitled ‘Alleyn Freyheit: Eine Beethoven-Séance’. The city’s Gürzenich Orchestra, Pierre-Laurent-Aimard, and François-Xavier Roth, invited us to this séance of freedom with what, through the offices of infidelity, may actually have proved in some senses a more faithful or at least imaginative recreation of its spirit. We were told nothing of the music to be performed other than its composers – and that pieces by Isabel Mundry and Francesco Filidel would receive their first performances. What we had heard would be revealed to us only at the end, on a programme insert to be collected as we left the hall. With that in mind, I have uniquely placed details at the close rather than the opening of this review, following not only that chronology but also that of Debussy in naming his piano Préludes. The impatient or merely curious are of course free to skip the following paragraphs, but I thought it might be more valuable to record my impressions as they came to me rather than to edit with inevitable hindsight. I thus took notes during the performance and shall make do with as little editing as possible, doing little more than turn them into full sentences (usually). The reader will have to take my word for it that I correctly identified Beethoven’s scores and matched composers to music. works by Helmut Lachenmann’s and Bernd Alois Zimmermann I knew; the others I could not possibly. However, after a little metaphorical head-scratching, I worked out that Isabel Mundry’s music – orchestral fragments, as I learned later on – was interspersed with Beethoven and Lachenmann. For what it is worth, I have also refrained from reading interviews and notes in the actual programme, although I shall certainly take a look after posting this. 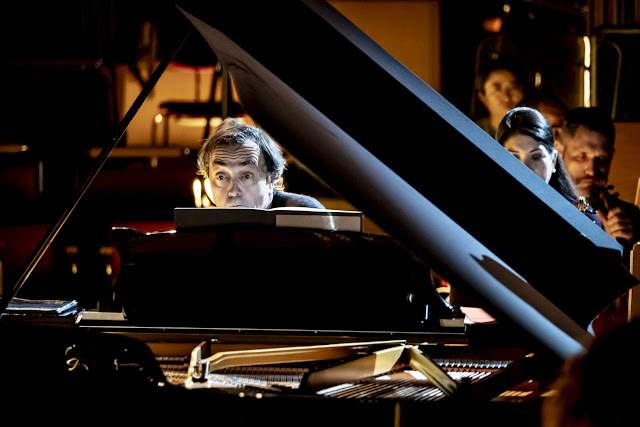 A large orchestra, soloist, and conductor having assembled onstage, it was perhaps surprising – although what here would qualify as unsurprising – for the concert to open to the strains of the Moonlight Sonata, yet from afar. It made sense, though, if this were to be a retrospective appreciation of the composer, for this was not only from afar. A second pianist and Aimard began to collaborate with what we had heard – recorded, or was it? and for the soloist as such to assume his proper role. Immediately memories, ears, the imagination started to play tricks – as did orchestral percussion. Musicians turning, bowing their heads, and so on acknowledged the billing of choreographer Jörg Weinöhl. The orchestra grew, though it took longer for relatively conventional – non-extended? – techniques to be employed. There was no doubting, however, the éclat of Lachenmann’s contribution, nor of the orchestra’s performance, gradation of attacks and resonance both precise and visceral, waves of sound passing across the orchestra so as to send shivers down the spine.

A change in lighting (Bernd Purkrabek) heralded something different: a new piece, so it seemed, although not for long. [This, to avoid confusion, was the second of Mundry’s Fragments, Lachenmann having followed Beethoven.] It used both pianos and orchestra, calling on six horns and two oboes to stand; at least the choreography did. Then suddenly, without warning came something familiar yet strange: the introduction to the first movement of Beethoven’s First Symphony. Or was it? So disoriented had my expectations become that I found myself asked the occasional question about Beethoven’s scoring. (‘Did he really write that phrase for the flute?’ is one I recall, and afterwards recall Beethoven having been criticised for supposedly excessive use of wind in this work.) I think I was wrong to have done so, but to be enabled to listen critically in that way concerning music I allegedly know so well was a fascinating experience in itself. It was an unfashionably large orchestra we heard for this symphony, or however much of it we were going to hear – and all the better for it: it had bite and heft, colour and… 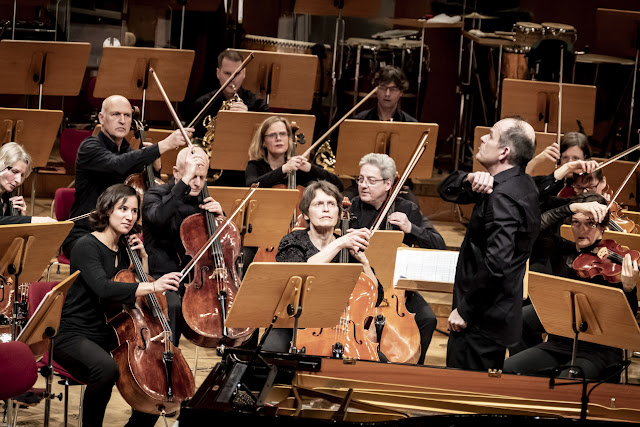 … then the light changed, downward orchestral glissandi were heard, and Aimard and his page-turner solemnly left the stage. So too did a number of other musicians from the orchestra, those six horns and two oboes included. This mysterious Mundry (?) interlude – was it a continuation of what we had heard previously? – led us to another Beethoven introduction, that of the Fourth Symphony, darkly expectant. This time, it was my sense of pitch that I did not quite trust. Was it at modern pitch? A nagging doubt remained. After all, I told myself as the exposition progressed, context is all: this means something different here and now, if indeed it ‘means’ anything at all. Departed wind players reappeared on the balcony above to signal to us friends nicht dieser Töne, but something again unexpected: the transition to the finale of the Fifth; and then the opening of the portals of heaven itself. Those trombones! The rest of the orchestra too, of course, not least the excellent Cologne timpanist, but those trombones: what a thrilling Beethovenian moment it was once more, ‘authentic’ in the best sense. I could after all be excited by this music again when conducted by someone other than Furtwängler, Klemperer, or Barenboim. (There are others, I admit, but a list would be beside the point right here.) Moreover, I could do so without the tonal preparation of the rest of the symphony, which I should otherwise have insisted was necessary. How long, I wondered, would it go on? When would it be transformed into something else? The scherzo reprise came and went; heaven reopened. Wind were again especially prominent, hinting perhaps at the contemporary music – to Beethoven – of French Revolutionary processionals. Was I merely romanticising? If I were, why should I not, given a tradition dating back at least so far as ETA Hoffmann? On this occasion, at least, we reached the end, thus signalling the interval.

Upon returning to the hall, it was clear that some audience members had left. My initial reaction was to wonder why, but perhaps just as valid a question would be ‘why not?’ It is difficult, for whatever this may be worth, to imagine that some did not in 1808 – and their departure did no harm to anyone. It was not the full orchestra that was back on stage, although Aimard was back. The opening piece [the fifth and final of Mundry’s Fragments] played with piano and orchestral response. Cellists, percussionists, others shone in ways traditional and not. [Alas my memory deserts me here with regard to precisely what.]  We were invited, even compelled, to listen and indeed to watch. Was that Aimard playing a ‘light’ version of Beethoven? It took me a few seconds to realise that such lightness, as ever with the Bagatelles, was largely deceptive; hearing them at the same time as other music, seeing them at the same time as other actions was undeniably strange. The orchestra, intriguingly, seemed at times almost asleep and needed to be roused.

‘Warmer’ lighting signalled an impending change; as if by magic, we were part way through the first movement of the Emperor Concerto, somewhere in the development, leading us to the recapitulation. Aimard offered some delightful leaning into phrases, blinding clarity too, not least in trills reminiscent of Pollini in his prime. Once the movement had come to a close, a further dialogue between piano and orchestra began, piano seemingly querying the chordal responses it received, responses that nevertheless led it – and us – away from Beethoven, whether we liked it or not, initial memories disintegrating. This different voice fashioned music to metamorphose into a new concertante work: hectic, rhythmically insistent, playing on the ruins of tonality with a fine sense of the sardonic that occasionally brought Prokofiev to mind. Childhood and even childish memories, clockwork machinations, other, darker remembrances of things past or imagined fascinated in a veritable riot of invention, after which Aimard left the stage. The second movement of the Seventh Symphony followed, as compelling a processional as ever, after which Aimard and missing orchestral players returned. The orchestra stood and the lights went down. There was, notably, no applause, although it seemed like a moment when there might have been. What was Aimard, seated, about to play? 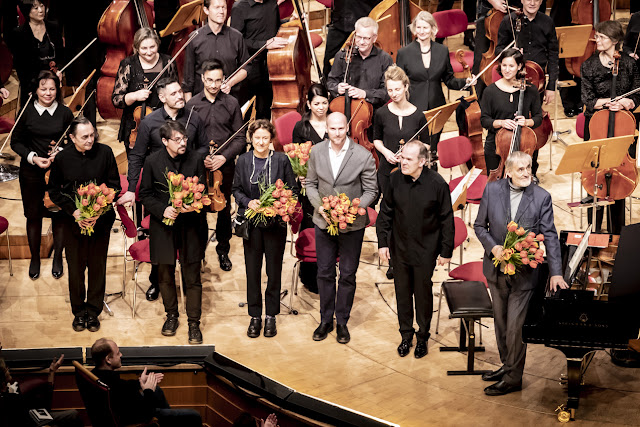 It was the final movement [ultimately only part of it] of the final piano sonata, op.111, exalted yet also strangely exultant. Oddly, given the elements of choreography throughout, I started to wonder about the silhouetted organist’s head, sometimes still, sometimes moving, I saw to the side of the stage. Was it, too, part of the performance? It was difficult to see how, yet once seen, I could never quite forget my wondering. The music led without a break into something new – and yet perhaps not quite so new. By this stage, I had forgotten that Zimmermann was on the programme, and it took me again a little while to realise that this music, with its unnervingly oscillating opening, an oscillation seemingly retained yet transformed into a dialectic between precision and vagueness, was indeed what it was. So this was why an organist had appeared: for the horrific fragments of musical remembrance – how apt! – of Photoptosis. Yet there was no ‘O Freunde…’ moment; the finale to the Ninth had been revoked, as in Mann’s Doctor Faustus, or at least averted. Truly this was a nightmare from which we might never awake. Parsifal, The Nutcracker, and, for some reason the most unsettling, Scriabin’s Poem of Ecstasy took their bows, but for what? Did they, did the Bach and plainchant, ‘mean’ anything any more? Do we not hear them all now in the shadow of Beethoven, which is to say of our construction(s) of ‘Beethoven’? Does not all music, old and new, Beethoven’s included, stand in that shadow? As if it had not been with us all along, darkness fell.