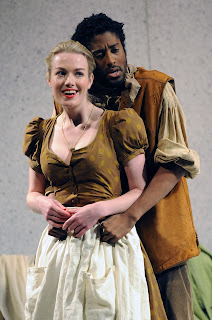 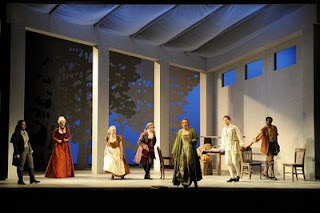 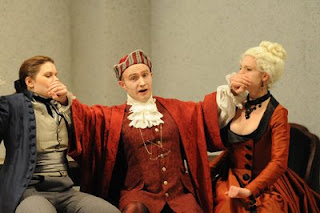 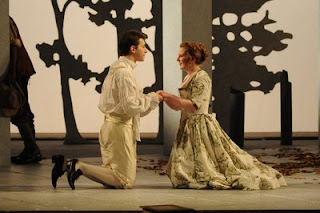 This was both an excellent performance and an excellent showcase for the work of the Royal College of Music’s Benjamin Britten International Opera School. Every bit as importantly, it reminded or informed us just how fine a work La finta giardiniera is. In many respects it as crucial a work in Mozart’s operatic development as Idomeneo, not the fully-fledged masterpiece that the latter – a greater work when written than any opera since Monteverdi, leaving even the Gluck of Iphigénie en Tauride standing – is, yet nevertheless a great leap forward. There is nothing generic here about Mozart’s musical language; although only eighteen years old at the time of composition, this is indubitably the composer of the later Salzburg years, perhaps more familiar to many listeners from contemporary sacred and symphonic works, not least the ‘little’ G minor symphony, KV 183. Most crucially, we now encounter a musical dramatist with extraordinary powers of characterisation. We may not be talking about Figaro here, but Mozart’s operatic characterisation already surpasses that of Handel or Haydn. It is perhaps no coincidence that La finta giardiniera is an opera buffa, only Mozart’s second comedy. The problematical form of opera seria was not yet dead – indeed, it would continue into the nineteenth century – but Mozart’s genius and indeed the imperatives of the Classical style were not truly of that world. La clemenza di Tito would be Mozart’s sole mature contribution to the form, in sharp distinction to the practice of his earlier years, and even Tito would benefit from a considerable infusion of buffo musical practice. Tellingly, in La finta giardiniera, social distinctions and to some extent social conflict are sharply in evidence, a mark of Mozart’s increasing skills of characterisation and a clear stepping-stone towards Figaro and Don Giovanni. This work needs no excuses but evidently it still requires advocacy. The Royal Opera, when recently staging it for the first time, condescendingly abandoned it to period instruments; the RCM knew better.

I feared a little when hearing the overture. Many modern performances of Classical operas seem a little unsure when handling purely orchestral music, accentuating irritating, allegedly ‘period’ characteristics. Here, the phrasing could certainly have been more lovingly handled and the whole could have been more relaxed: no need to be autumnal, but summer would have been fitting. However, Michael Rosewell’s reading soon settled down and if there remained occasions when less haste would have aided the flow, I should not wish to exaggerate. The orchestral playing itself was of a very high standard, allowing the audience to savour Mozart’s increasingly bold writing – never more so than in that extraordinary first-act aria, ‘Dentro il mio petto il sento,’ in which almost every instrument is hymned and in return hymns us, ravishing our senses. The only blemishes here were kettledrums lacking in bloom, trumpets that sounded suspiciously ‘natural’: either they were, or they had been instructed to sound so. In neither case could the players be held responsible. The excellent acoustic of the Britten Theatre assisted in conveying the delights of their performance, rhythmically firm but far from unyielding, but of course it only assisted.

Vocally, this score is quite a challenge for any cast, yet the singers of the BBIOS rose to that challenge with considerable credit. The youth of their voices probably assisted in the blend of ensembles, but the arias, not least the more elaborate ones for the noble personages, are full of pitfalls; these were here skilfully navigated and even relished in the act of avoidance. Lorna Bridge was rather cruelly set up for a fall in an interpolated quotation from the Queen of the Night when making made her entrance as Arminda. It might have worked, had she sung in tune. Thereafter, however, she proved herself a fine soprano and a fine actress, secure if dislikeable in her upwardly mobile status as the mayor’s niece, seeking a noble marriage. Anna Huntley did well in the somewhat unexciting castrato role of Arminda’s suitor, Don Ramiro; likewise Tyler Clarke as the mayor, Don Anchise. I was not especially taken with Colette Boushell as the pretended garden girl herself. Her phrasing and diction were impressive – indeed, the same should be said of the entire cast – but there was often an unsteady quality to her voice, save for when singing at forte level or above, which too often she did. I wondered whether hers was really the right voice for the role and whether she was therefore in some sense attempting to compensate. However, Alexander Vearey-Roberts was a true discovery in the role of Belfiore. There was the occasional faltering, but this counted for little in the face of a commanding portrayal. Tender, ardent, and beguiling of tone, he also showed himself a fine actor. Both Boushell and Vearey-Roberts handled the surprisingly plentiful accompanied recitative – appropriate to their true, noble standing – with security and with flair. Sadhbh Dennedy and Peter Braithwaite also excelled in stage and vocal terms as Serpetto and Nardo respectively. Dennedy, who had impressed me last year in The Rake’s Progress, evinced a sure grasp of her serving-girl idiom, harking back to Pergolesi but also looking forward to Susanna. Braithwaite made the most of his role, neither over- nor underplaying its comic potential, exhibiting a fine young baritone in the process.

Jean-Claude Auvray’s production ran in a slightly stylised eighteenth-century setting, which is probably the ideal way to perform such a work. It cannot quite be taken at face value but may prove a little too fragile to an unduly radical reinterpretation, at least until it can properly be said to have entered the repertoire. Costumes were of their period, without fetishising, and occasional birdsong gave a sense of the outdoors, without jarring. One trick that was overdone was the emergence of cast members from within the theatre. Sometimes this can work but it needs to be done sparingly, or it becomes, as here, a mannerism – and a pointless one at that. Auvray’s direction of the singers as actors was, however, most impressive. He is clearly a director who knows how to achieve what he wants. Moreover, he has a sense of and respect for the music; what ought to be a sine qua non is often, sadly and infuriatingly, anything but. Auvray’s most signal achievement was to permit the talented cast to explore and to communicate the riches of Mozart’s wonderful score.
Posted by Mark Berry at 12:41 am