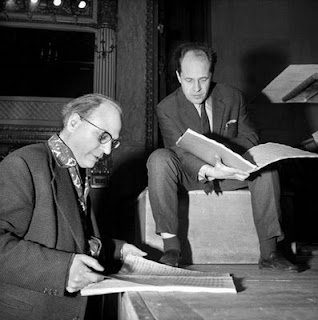 And so, the Southbank Centre’s festival, From the canyons to the stars: the music of Oliver Messiaen, directed by Pierre-Laurent Aimard, came to an end on Messiaen’s hundredth birthday. Aimard, typically self-effacing, and on typically spectacular form, played in only one of the three works performed. He ceded the stage to the greatest of Messiaen’s many pupils, Pierre Boulez, not only as conductor of the Ensemble Intercontemporain, but also as composer of sur Incises. There was added historical weight to Boulez’s presence in that he had conducted the first performances of both Messiaen works: Couleurs de la cite céleste at Donaueschingen in 1964 and Sept Haïkaï as part of the legendary Domaine Musical concert series – precursor in a sense to the permanently-established EIC – two years earlier. To Boulez as conductor we must therefore, in the case of the latter work, add Boulez as commissioner.

For Couleurs de la cite céleste, Aimard ceded his place as pianist to Sébastien Vichard, a member of the EIC. Vichard was more than adequate to the task; it was only when Aimard played for Sept Haïkaï that it became truly apparent what a musician so utterly steeped in Messiaen’s music might have added. There remained much to savour, however, despite the occasional – and most surprising – slightly ragged moment from the woodwind. The ensemble sounded more ‘French’ in timbre than I had expected, harking back, whether through chance or design, to the sounds Messiaen might have heard in Parisian concert-life. A typically Messiaenesque polarity was set up and implacably maintained between the unbending ritualism of his alleluias and the freedom of birdsong. In between, trombone and bells sounded the apocalypse in splendidly sonorous fashion. Vichard shone as his piano sang in unison with the bells, imparting a true sense of awe. The Brucknerian silences – and gong-echoes – of the conclusion were given their full worth by Boulez, mindful perhaps of his more recent success in conducting the music of another deeply pious and in some senses untimely composer.

Sept Haïkaï is, I think, a tougher proposition for the listener, at least for the Western listener. Not only is there a good dose of late-‘Darmstadt’ – actually, as mentioned above, Donaueschingen – aggression; there is none of the Catholic mooring that often helps us to find our bearings in Messiaen. Here instead the religious aspect relates to the Buddhist and Shinto temples of Japan and birdsong plays a still greater, parallel role than in the first work. Yet there is the same polarity between freedom and ritual, which once again Boulez brought to the fore. The eruption of birdsong in the third movement, Yamanaka – cadenza, gave the impression of an ultimately irrepressible force finally bursting forth. Aimard’s solo cadenzas transformed notes into music, leaving this listener utterly spellbound. In the Gagaku, as Peter Hill explained in a characteristically excellent programme note, Messiaen imitated the timbres of traditional Japanese instruments such as the reedy hichiriki – which Messiaen himself described as 'extremely disagreeable and at the same time expressive' (!) – and the shô, a form of mouth organ. Messiaen’s description seemed to be followed to the letter by the combination of two oboes and English horn; nor did I care for the string harmonies, played sul ponticello and non vibrato. Still, that is what Messiaen wrote – and that is what we heard. Far more to my taste was the range of sonorities Aimard employed and the staggering virtuosity he unleashed in the sixth movement, Les Oiseaux de Karuizawa. Boulez’s command was almost unnervingly displayed in the strange deceleration with which that movement closes. (According to Hill, Messiaen’s notebook describes the Ô-yoshikiri bird’s song as resembling the acceleration and deceleration of an engine.) In the coda, there was a palpable sense of return to the guardian gods of the first-movement introduction, of coming full circle. And then both music and performance straightforwardly stopped.

Impressive though the Messiaen pieces in the first half were, sur Incises is the considerably greater work, indeed a masterpiece, receiving a performance to match. It is now more than eight years since I first heard sur Incises, in a performance conducted by Pierre-André Valade, with the London Sinfonietta, on Boulez’s seventy-fifth birthday. Good though that had been, this performance, under the non-baton of the composer himself, seemed to me definitive. The musicians of the EIC – three pianists, three harpists, and three percussionists – had the music under their skins and could therefore interpret it as part of the repertoire, rather than merely presenting it as new music: always a stated aim of Boulez’s music-making. There is, in the instrumentation, of course, the odd echo of Les Noces, but in reality Boulez’s strategy is quite different. The spatial element, here superbly realised, and assisted by the much-improved acoustic of the Royal Festival Hall, allows one to hear solo lines but also different groups: three groups, considered vertically, each of percussion, harp, and piano, and, considered horizontally, the three percussionists, the three harpists, and the three pianists. One of the most startling aspects of the latter formations is to hear passages transferring spatially across, say, the three pianos, whilst remaining in a sense part of the one giant piano – Incises, the original work, is for piano solo – played by the composer-conductor. Another striking aspect is the often Romantic tinge to the piano writing; I even fancied that I heard the influence of Chopin. It is also as if Boulez is playing with a musical magical square, albeit in a rather different sense from Webern’s, the three rows and columns constantly shifting, and yet somehow always adding up to the whole. For in a host of different ways, it is the sonorities that beguile; indeed, I do not think that any composer has secured, nor any conductor elicited, such beguiling sonorities. There are harmonies of Debussyan sumptuousness, but there is also a kinetic, rhythmic energy that brings to mind Stravinsky and Bartók to mind. The ghost of Bartók seems especially present in some of the piano writing, which then proves contagious for the other instrumentalists. Such progressions are the stuff of this music, another being that of reflection, for instance in the ruminative cadenza-like passages for piano, bringing forth life, and vice versa. The serial principle, so powerfully realised in this performance, is anything but constricting; it is rather a principle of an ever expanding universe, forever sparking off some further musical reaction. Moreover, this performance reminded one of Boulez’s infinite compositional flexibility, putting him, despite the context of this context, rather closer to Debussy than to Messiaen. Despite the sense – and, I suspect, for many, the desire – that this universe could have gone on expanding, its materials proliferating, forever, the very real, magical conclusion proved quite a contrast from the abrupt, if perfectly timely curtailment of the Sept Haïkaï. There could be no doubt that this was Boulez’s night, as was underlined by the surprisingly – at least to me – ecstatic reaction he received from the audience. I ought, like Messiaen, to have had greater faith.
Posted by Mark Berry at 1:38 am