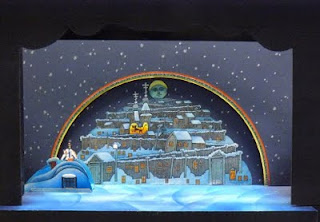 Alexander Polianichko’s enthusiasm, when I interviewed him, for Tchaikovsky’s Cherevichki was infectious. His advocacy of the score in the theatre proved equally strong. No one in the audience could have been in any doubt concerning the identity of the composer. The characteristic Tchaikovskian ebb and flow, the orchestral sound, the sheen and sweep of the Orchestra of the Royal Opera House’s strings: all were present and convincing. The need of which he spoke to allow the singers to be heard was met, without reducing the orchestral contribution in stature – the ‘accompanying’ route of lesser conductors. If the work came across as somewhat sectional, that is because it is, but also a consequence of the audience’s irritating habit of applauding everything (that is, when people could be distracted from coughing and sounding their electronic devices).

For the problem really lies with the work itself. The Royal Opera House should be applauded for mounting its first ever production. (Apart from a Garsington production in 2004, that seems to be just about it in terms of British stagings – and even the Bolshoi does not have the work in its repertory.) Cherevichki certainly deserves its chance to step out from the shadows and is indeed a better work than many that hold their place in the repertory – anything by Verdi, for instance. But Eugene Onegin or The Queen of Spades it is not, let alone Mussorgsky. The score has its moments, especially during the ballet music, here superbly choreographed by Alastair Marriott and exquisitely danced, making for a definite extra attraction for opera-loving balletomanes – or should that be the other way round? Royal Ballet principals Mara Galeazzi and Gary Avis impressed greatly, as did members of the corps de ballet and the Cossack dancers, three of them members of the Zaporozhian Cossacks. The St Petersburg music of the third act – in Tchaikovsky’s terms, that is, for here the four acts were presented as two – has its moments as well, not least the courtly evocations of The Queen of Spades. But the evocations of fate do not seem to lead anywhere; unlike the symphonies or the greater operas, nothing really seems to be at stake. The Italianate passages tend towards Glinka or indeed Verdi. Moreover, the lighter moments, of which they are many, tend towards the nondescript; humour was never really the composer’s forte. I should have defied anyone to find amusing the concealment of Solokha’s admirers in coal sacks, or their emergence therefrom, but the audience reaction proved me wrong.(Few operatic comedies are actually funny, and even when they are, for instance Le nozze di Figaro or Die Meistersinger, their greatness lies in a true sadness that eludes the composer on this occasion.) What often emerges is a surprisingly nationalistic Tchaikovsky, with considerable folk-song reference, but one who finds it hard to convince. Often he will do so by insistence; here he flits around somewhat, without achieving the magical lightness of touch of so much of his ballet music.

The singing was mixed. Diction was generally good; even as a non-Russian speaker, I think I could have transcribed a good number of the words. Maxim Mikhailov showed that he could act as well as sing, as the Devil, though one might have expected a greater ‘presence’ in both senses. Larissa Diadkova exhibited more of this as the witch Solokha, though with a few vagaries of tuning. Sadly, there were more than a few in Olga Guryakova’s, especially during the first act, where she was all over the place. Some might find the generosity of her vibrato idiomatic; for the rest of us it was something of a trial. She came more into her own in the final act, but there were too many unpleasant memories by then truly to be convinced. Her beloved, Vakula, received a stronger performance from Vsevolod Grivnov, hapless by intent rather than by default. The massed array of deep Russian voices did not disappoint, and there were notable performances in St Petersburg from Sergei Leiferkus and Jeremy White.

Francesca Zambello’s production plumbed no depths, but that is hardly what the work is about. The direction of the characters was alert and musical. I do not know how much input Marriott as choreographer had here, but whoever was responsible for tallying words, gesture, and music deserves gratitude. (Such an alliance should go without saying, but tone-deaf stage direction is, sadly, more often the rule than the exception.) The greatest impression was made by Mikhail Mokrov’s stage designs and Tatiana Noginova. Their Ukrainian naïveté and, during the Petersburg scene, courtly opulence are richly evocative. It made perfect sense to learn from a programme article that Mokrov is an illustrator, for it is a children’s picture-book that is most often evoked. As in the case of the Mariinsky’s Tale of Tsar Saltan, brought last season to Sadler’s Wells, it is difficult for a jaded Westerner not to take these scenes ironically, but I do not think that is how they were intended. Young children will, I suspect, be enchanted by them, though whether they will have the patience for a three-hour opera, interval included, is another matter.

The opera, then, is no neglected masterpiece, but this is so rare an opportunity afforded by Covent Garden that it is well worth grasping. There are plans to broadcast it on BBC Radio 3 (Saturday 5 December, 6.30 p.m.) and on BBC 2 at some point over Christmas. It is also scheduled for release on DVD, ensuring that a larger audience will be able to judge for itself. One small matter: the Royal Opera has, understandably, used an English title, The Tsarina’s Slippers rather than the Russian for the ‘slippers’, Cherevichki. Richard Taruskin, who ought to know, counsels that they are not slippers at all, but ‘high-heeled, narrow-toed women’s holiday boots’. I can understand why The Tsarina’s or, as we hear in the text, Tsaritsa’s High-heeled, Narrow-toed, Women’s Holiday Boots might not have been thought the best title, but ‘boots’ rather than ‘slippers’ perhaps?

(For more pictures of the set designs, see my interview with the conductor.)
Posted by Mark Berry at 5:07 pm