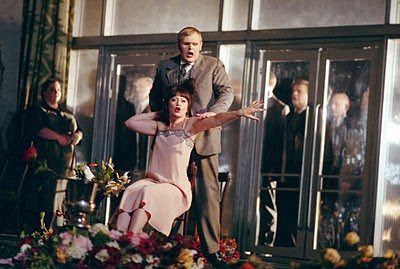 
Christopher Alden’s production of The Makropulos Case garnered considerable acclaim upon its first ENO outing. It benefited from a strong cast and from the guiding hand of the late Sir Charles Mackerras – to whose memory this performance was dedicated – but it has virtues of its own. Foremost amongst them are Charles Edwards’s powerful set designs, redolent of Eastern European civic architecture without fetishising a location that ultimately is neither here nor there: for the truly though not exclusively national, one turns to the music. These designs frame the action in a manner that manages to convey a degree of claustrophobia but also the public arena in which the drama plays itself out. Emilia Marty is an opera singer, after all – and a ‘famous’ one at that. But there is perforce coldness at her heart, such being the nature of her near-immortal predicament, and that coldness is reflected in the setting, not least Adam Silverman’s lighting. The men lined up outside look in on her world and occasionally participate, insofar as she permits them, though they never really understand it or her.

And yet, Alden seems to view the opera partly as a comedy, or at least has come to do so. (I do not remember this registering last time around, but that may just be my failure to recollect.) Karel Čapek’s original play is a comedy, though I cannot claim acquaintance with it. That has never, however, seemed to me to be the spirit in which Janáček prepared his opera. There are surreal happenings, to be sure, but playing Marty for laughs, as Amanda Roocroft often did, and turning Baron Prus into something of a Carry On figure, embarrassed and embarrassing in his underwear, does the work no favours. Moreover, one needs a good directorial reason to disregard the instruction that Kristina burn the Makropulos document, red Glückliche Hand-like glow of burning or otherwise; I am not sure that there is one here.

Roocroft’s performance was loudly acclaimed. During the first act, she impressed considerably. However, a reading that threatened to degenerate into farce seemed, at least to me, to undersell the nobility in the role. Diction and intonation deteriorated too. There was certainly enthusiasm to her portrayal; one could not fault her for effort, but it increasingly seemed misapplied. Cheryl Barker first time around gave a more complete account. Casting in general, however, remained strong. Andrew Shore and Alasdair Elliott provided subtly coloured and differentiated readings of Kolanatý and Vítek, whilst Christopher Turner and Laura Mitchell proved youthfully ardent as Janek and Kristina. There was strength, but strength aptly born of bluster, in Ashley Holland’s Prus. The serving roles – Cleaning Lady, Stage Technician, and Chambermaid – were characterised, some might say caricatured, with musical and verbal aplomb by Morag Boyle, William Robert Allenby, and Susanna Tudor-Thomas. Perhaps, though, someone – whoever issued instructions to this effect – should be informed that cod-Northern accents does not always sit well with operatic vocalism, and, more seriously, that geography does not equate to class. It was worth attending for Ryland Davies’s splendidly acted Hauk-Šendorf alone.

Sir Richard Armstrong often drove the ENO Orchestra fiercely. There was no want of dramatic verve in his reading; it echoed Mackerras quite strongly in fact. There were, moreover, moments, however fragile, in which Janáček’s musical phantasmagoria could truly beguile, supreme amongst which must be the waltzing harmonics that enable E.M. to reach the climax of her tale. The orchestra was on excellent form, strings especially sweet, and the full head given to pounding kettledrums dramatic rather than melodramatic. Perhaps most impressive was Armstrong’s handling of Janáček’s fragmentary technique. Snatches become parts of a whole, but the alchemy, like that of Makropulos’s formula, is mysterious. One knows it when one hears it – and one heard it here.

One other thing, though: Janáček objected to the freedom with which Max Brod prepared his German translation for the first German performance under Josef Krips; Brod was compelled to make many alterations. I dread to think what the composer would have made of this English version by Norman Tucker. One can argue about the merits or otherwise of opera in translation, especially since the advent of surtitles at the Coliseum, but if the libretto is to be translated, something that captures the spirit and perhaps even the sound of the original better than this would be welcome. Jarring colloquialisms appear thick and fast: ‘Cor Blimey!’ inevitably puts one in mind of Dick Van Dyke. It was difficult to discern any effort to provide a substitute for the Czech speech rhythms that so colour the composer’s music. Still, performances were of a high standard – and ultimately, the play’s the thing.
Posted by Mark Berry at 7:04 pm