The second cast for the Royal Opera's production of Don Giovanni is about to take the stage. Headed by Erwin Schrott, there seems every reason to believe that the vocal performances and acting will be very strong. I shall be reporting back after the first night (16 February). Carmela Remigio will play Donna Anna; she was kind enough to answer some e-mailed questions. Her responses bode well for an interesting, intelligent performance... 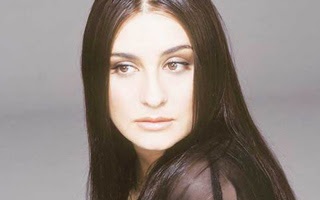 MB: What are the greatest challenges and the greatest delights for you as an artist in singing the part of Donna Anna?

CR: My greatest challenge is to give Donna Anna a complex and faceted character. To let the audience feel how ambiguous and enigmatic she is. Passion and control at the same time. Musically, she is acrobatics every time she sings. A lot of high notes - maybe 35 natural A’s in just “Or sai chi l’onore”. A deep emotional strength is needed to play such a violent aria, so full of resentment, and a firm vocal control of all sounds as well. When I can reach this point, I am happy.

MB: Like Sena Jurinac, for instance, you have played both Donna Anna and Donna Elvira. Do you find that singing one role helps you understand the other? How would you characterise the differences between the roles, temperamentally and musically?

CR: Playing both roles has certainly helped me to better understand many aspects – how to interact with the other characters, what happens while I am off stage. Among the three women, Elvira is the most simple and clear. She is the one who had the wedding promise from Don Giovanni. They have had a three-day long passion, which is a lot for Don Giovanni … but he shirks,and she goes mad for being deserted, she runs after the fire but gets burnt and is devastated, until she decides she will not love any one any longer, and wants to enter a convent.

Anna is different. I like to imagine her meeting Giovanni at a masked ball. The two have an immediate feeling, maybe also an intellectual one. Mozart and Da Ponte do not describe Anna as a transparent woman. The words, the music are full of misunderstandings, agilities I see as emotional weeknesses, unexpressed uneasiness in the attitude she has to play, as a noble woman, towards a fiancé who does exist, and whom she probably loved a lot until she met Don Giovanni. But Giovanni is the passion, the woman’s mental perversion – which is what a fiancé will never represent.

MB: Donna Anna is the character who stands closest to the apparently ‘eighteenth-century’ world of opera seria, yet she also appealed strongly to the Romantics – ETA Hoffmann, for example. Do you see her as a character looking both backward and forward? Or do you think the balance lies more in one direction?

CR: I absolutely believe Anna is already the nineteenth century. Mozart is a genius. What he writes for Donna Anna is unique. “Non mi dir” reminds me of Casta Diva, and when singing it I must use the same legato and the same drama in the agilities.

MB: What desire, if any, do you think Donna Anna feels towards Don Giovanni? Is she just better at hiding her desire than Donna Elvira?

CR: Donna Anna lies. She does know her lover, and thus the one who killed her father, but… she has to lie. She has a fiancé, she cannot confess she betrayed him with her father’s killer. How many times in life you happen to lie to the man you love! I believe many women know this feeling of love and contempt for someone they long for and will never have. And they do not dare to tell their fiancé – who is actually loved as well – he is not the first in their hearts. This turmoil of thoughts is what places Anna higher than other Mozart women, and maybe the closest one to Don Giovanni for her emotional complexity.

MB: Donna Anna also has a very strong relationship with her father. Do you have any thoughts about the nature of that relationship and its implications for her actions?

CR: I have never thought Donna Anna’s problem being her father. Mourning suddenly comes and upsets her mind, but I do not see any particular relation with her father as crucial for her emotional balance.

MB: Do you feel pity for Don Ottavio? His role is so often described as ‘thankless’, and one might say that that characterisation has much to do with the way Donna Anna treats him.

CR: I feel tenderness and also love for Don Ottavio. What makes Anna suffer is her awareness to betray someone she loves. How can you detest a man who says “Dalla sua pace la mia dipende” (my peace depends on hers)?

MB: Do you think she has anything in common with other Mozart characters? Elettra and Vitellia, for instance, both of which seria parts you have sung?

CR: Mozart female characters can have something in common. They are all interesting women, but different one from the other. Mozart shows he knows women’s sensitivity, weaknesses and strengths very well. Feeling and reason must live together in the purity of their cantos.

MB: To take another of your Mozart roles, Susanna, does that require an entirely different approach, both in terms of acting and vocal characterisation?

CR: Difficult Susanna… always on stage, with everybody, always singing… and at the end of the opera you have sore feet! Joking aside, Susanna kicks her legs up along the whole opera. Then the universe becomes still… and she sings “Deh vieni non tardar”… The aria is charged with high sensuality, a unique example of musical mastery. It is a very beautiful role, but she is very transparent as a woman.

MB: Mozart is generally praised for his sympathy towards female characters; that sympathy is what helps make them so believable, so human. Is that your experience, in this and other Mozart operas?

CR: I am just in love with Mozart. I wish I was his wife to know which folly these masterpieces would come out!

MB: Are there any other Mozart roles you are keen to play, whether now or in the future? Perhaps something from one of his earlier works?

CR: I would love to continue playing all the Mozart roles I have interpreted up to know.

MB: The male singers with whom you are working on this particular production – Erwin Schrott, Alex Esposito, and Pavol Breslik – are all artists whom I have admired greatly in other productions I have seen of Don Giovanni. How much does it help your own performance to be working with such fine actor-singers, and to interact with them on stage?

CR: It may seem an obvious reply, and it is open-hearted instead. I am really happy to play with this team. We work hard during rehearsals, but always with the right mix of play, fun and laugh. This helps the artistic outcome in a very positive way. With them it is possible to explore the infinite nuances of interpretation – which rises from the common wish to well accomplish a work we love and try to make it interesting. With Breslik, my partner on stage, I have a special musical and theatrical feeling.

MB: You have played Donna Anna in a production conducted by Claudio Abbado and directed by Peter Brook. What did you learn from collaborating with such distinguished artists? And how did you find their approach to Mozart, and to Don Giovanni in particular?

CR: I learnt a lot from my collaboration with Brook and Abbado. I was young enough, 23 years old, and could absorb all that an artist has to learn after studying the vocal technique for years searching for perfection. From Abbado I learnt the interpretative musical rigour, the Mozart style that must be impeccable and cogent, but also rich in musical nuances and thousand of colours. And then the use of the word and the consonant in the recitative. From Brook I learnt a very important thing he would always repeat us during a whole year of Don Giovanni on tour performance: “Forget you are an opera singer”. I cried at this at the beginning, then I understood that by detaching from myself I would let the right space for the character to seize me, and the voice would come out more freely. Still now, when I am on stage, I am Donna Anna for three hours. I cry, I love, give way to despair as she would do. Finally… I come back to Carmela only in my dressing room. He taught me that Freedom is Truth on Stage. And this has to go through minimalism and simplicity.