And still they come: a new piano piece by Mozart?

The Salzburg Internationale Stiftung Mozarteum sends news of a hitherto unknown piano piece, discovered in the attic of a private house in the Tyrolean Lech Valley by Dr Hildegard Herrmann-Schneider, and 'unequivocally attributed to the junior "Wolfgango Mozart"'. The latter identification is held to be of particular importance, given that Leopold Mozart used it more than once, for instance when writing the title page of the 1764 London Sketchbook. A full article will be published by Dr Herrmann-Schneider in the 2012 edition, expected to be published in September this year, of the Mozart-Jahrbuch. In the meantime, we have eighty-four bars of what would seem to be a sonata movement, marked Allegro molto, dated to c.1767. The piece has been performed in Salzburg this morning bt Florian Birsak (pictured below: images - Wolfgang Lienbacher) upon Mozart's fortepiano. I have been sent a recording file, but alas, have not yet been able to work out how to post it on here; however, we shall be able to listen to it on iTunes from tomorrow. For further details visit the Mozarteum site here. 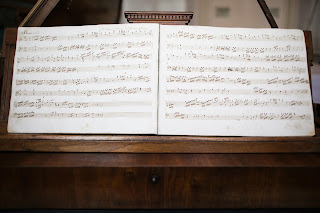 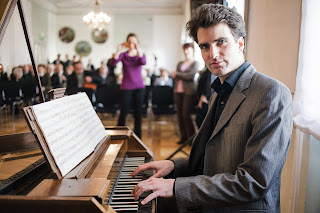