﻿
﻿
ENO’s peculiar decision not to stage any Wagner during its 2012-13 season, that is the season in which the greater part of Wagner’s bicentenary falls, is at least mitigated by a new production of The Flying Dutchman during this preceding season. There is much to enjoy musically, though there are a few problems too, but Jonathan Kent’s production fails to cohere. Whilst resemblances to Tim Albery’s dreary production across town for the Royal Opera are doubtless coincidental – though might it not reasonably be part of a stage director’s job to inform himself of what others in his position have done? – the factory setting of the second act, the increasingly odd, yet unrevealingly odd, costumes, and apparent unwillingness or inability to listen to Wagner’s score present an unfortunate kinship.


Unlike Albery, Kent appears to have some ideas. The problem is more that they rarely seem properly thought through, and that they do not necessarily cohere with each other. Video now seems more or less obligatory for the Overture; it is very well done here, but is it really necessary to evoke storms visually when Wagner does pretty well for himself with the orchestra. The curtain comes up a little way in, to present a little girl, a young Senta, one presumes, reading a book, referring to the Flying Dutchman, one presumes, whilst apparently being pushed aside by her busy father. (Weird lighting made the girl appear, at least from my seat, as if she were auditioning for The Black and White Minstrel Show. I wondered what on earth was going to happen, feeling quite filled with foreboding, until I realised that she had not after all blacked up.) The timing is unclear; sometimes we appear to be vaguely contemporary, at other points a few years back, though certainly not when Wagner sets his drama. It seems that Senta therefore imagines her Dutchman from her childhood fantasies; the problem here is that in no way is this as coherently presented as when Harry Kupfer in Bayreuth and Berlin unforgettably presented the drama as her dream. Is she dreaming the rest of the drama? It does not appear so. In which case, how is it that anyone else can see the Dutchman? Most do not – a ghost, perhaps? – but Daland certainly does. How, otherwise, can he treat with this strangely nineteenth-century apparition. A more Romantic, dangerous figure might make more sense; this Dutchman, however, dresses more like a character from Jane Austen. He stands out, but not necessarily in the right way; the concept either does not work or is not adhered to consistently.

A potentially good idea is the viciousness of the other factory workers towards Senta. She clearly does not fit in; they mock her, make her miserable. She belongs somewhere else: Wagner would surely have agreed. This continues into the third act, but alas, an apparent wish to be ‘theatrical’ undermines what might truly have intrigued and provoked. Albery too had a tawdry vision of the crew’s celebrations. Having married – or imagined marrying – the Dutchman during the entr’acte, Senta now finds herself jeered at, molested, and seemingly worse (shades perhaps of David McVicar’s ‘Dance of the Seven Veils’, in which Salome’s childhood abuse is relived). The women of the community do not care; they aid and abet the events. Unfortunately, the presentation is so over the top that it becomes more ludicrous than threatening, more West End musical or perhaps television game show than serious music drama. (And The Flying Dutchman is nothing if it is not taken seriously.) Amongst the oddities we witness are a person dressed up as a parrot, lots of inflatable toys, some people with Santa Claus hats, at least one woman with a huge red hand, and a few supernumeraries whose principal function seems to be to look good when they take off their shirts. It all seems quite out of proportion to whatever we have seen before, and reeks of a desire for spectacle, of whatever sort. Not once did I have the impression that Kent was responding in any depth to the score; often he did not even respond to the words. The frankly silly dance movements flatly contradicted, yet not in an interesting way, Wagner’s writing.

Senta is then rescued by the re-appearance of the Dutchman’s crew – unfortunately rendered in amplified, recorded form: a terrible mistake – but how and why, if, and I repeat if, they do not really exist? Has she merely imagined everything? In that case, it is difficult to take seriously any claims to societal critique, at least without further guidance or refinement. As for why a spotlight suddenly swung around the theatre and focused upon a seemingly random part of the Coliseum ceiling, I simply have not the faintest idea. My abiding impression of Kent’s production, then, was of an undergraduate with a few too many ideas, who would need to be taken aside, advised to deepen his acquaintance with the work over a few years, before returning to it and deciding more clearly how to pursue one or two of those ideas. The contrast with ENO’s most recent other Wagner, Nikolaus Lehnhoff’s ‘heap of broken images’ Parsifal, is stark.

The ENO Orchestra was on magnificent form, as fine as I can recall hearing it. As for Edward Gardner’s direction, this was a reading clearly determined to focus on dramatic excitement. There is nothing wrong with that, up to a point, but it missed Wagner’s depths. There was little of the problems with maintaining dramatic line that bedevil so many conductors – an impressive achievement for someone conducting his first Wagner opera – but the sound and drive seemed more appropriate to Verdi, or at a push perhaps to Rienzi. As so often, the Overture suffered from being driven too fast to start with and then abruptly altering to a drawn out snail’s pace. Yet once that was over with, and to the extent that one could ignore the lack of ‘German’ depth in sound quality as well as 'musico-dramatic' striving towards symphonism, there was a good deal to enjoy. Whether one should be ‘enjoying’ rather than thinking is of course another matter, but it was a relief to be spared the stopping and starting one so often endures, even in high-ranking houses. Perhaps Gardner’s conception will deepen over time. The work was performed without an interval, without the later, ‘redemptive’ halos to the conclusions of the Overture and the third act. I heartily approve, though a distinguished Wagner scholar, to whom I had been speaking on the telephone just before heading off to the Coliseum, thought otherwise. (Apparently he had advised Gardner to opt for the more ‘authentic’ version with intervals, on the basis that Wagner never performed it otherwise.) 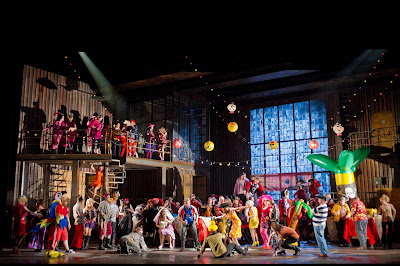 James Creswell made for the most part a commanding Dutchman; his care with the words, here sung in David Pountney’s translation, was noteworthy. Unfortunately, Orla Boylan seemed quite miscast as Senta. It is, I know, a very difficult role, but her often squally tone often turned downright hectoring; at times, it was almost impossible not to wince. Intonation deteriorated as the work progressed too. Thank goodness, then, for a typically detailed character portrayal from Clive Bayley, despite the silly dance he was forced to perform at the end of the second act, and for the undoubted star of proceedings, Stuart Skelton as Erik. His Romantic ardour led one to sympathise as often one does not, yet he ensured that one remained aware of the character’s limitations, of his modest existence, so as to avoid the danger of thinking Senta should have thrown in her lot with him after all. Skelton’s is a fine voice, of course, but he can act too – and certainly did. Though the voices could hardly be more different, I was reminded of a production I saw in Vienna, in which Klaus Florian Vogt – the first time I heard him – quite stole the show. Despite that misguided decision concerning the Dutchman’s crew, the choral singing was, a few rough edges aside, of very high quality: weighty and yet surprisingly incisive. Would that I could say the same concerning the production. For far more interesting stagings, turn on DVD either to Kupfer from Bayreuth or to Martin Kušej’s recent production for the Netherlands Opera.